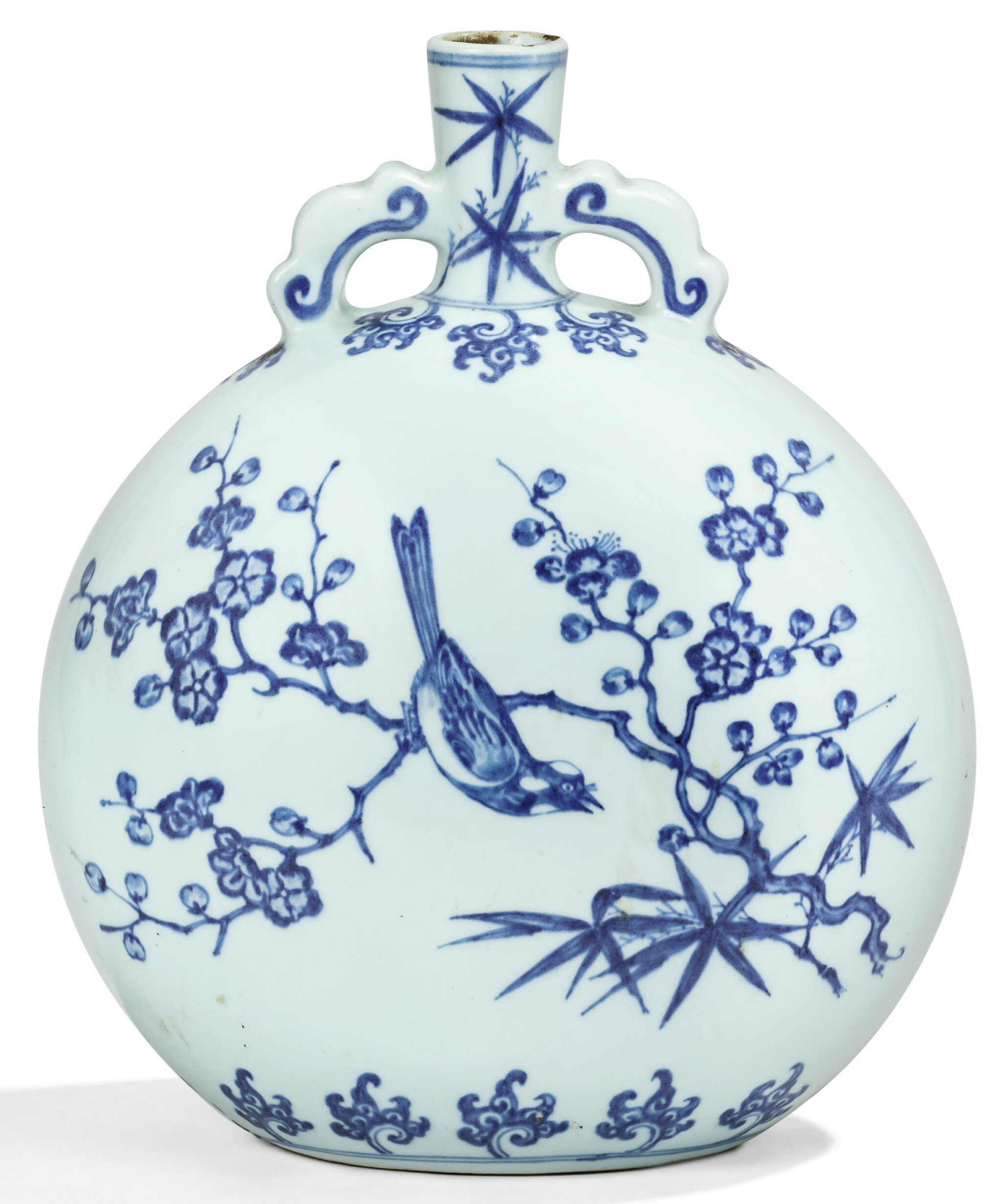 Inspection with UV light reveals very fine firing lines to the glaze where the two handles join the shoulder and the neck. There is overall light wear to the glaze and minor scratching to the glaze of the handles and two larger fritts to the glaze on the rim. There is a small area of kiln grits above the base.

This rare moonflask of oval section and nearly circular profile has a slender neck flanked by two scroll handles, the two sides painted in a deep cobalt blue under a blue-tinged glaze with different flower-and-bird compositions, both depicting a white-cheeked starling perched on a flowering branch entwined with a small stem of bamboo, both scenes bordered above and below by fanciful curly foliage motifs, the neck also with bamboo, and the handles accentuated by a scrolling line.

In its form and decoration, the present moonflask closely copies a Yongle prototype of which only one example appears to be extant, from the Sir Percival David Collection and now in the British Museum, London, illustrated in Regina Krahl and Jessica Harrison-Hall, Chinese Ceramics. Highlights of the Sir Percival David Collection, London, 2009, no. 28, p. 61. Only few Yongzheng examples of this design are known including the well-known example formerly in the Collection of Richard de la Mare and the Meiyintang Collection, first sold at Sotheby's London, 2nd April 1974, lot 369, last sold at Sotheby's Hong Kong, 7th April 2011, lot 76; and a second example of the same size and design but unmarked, sold Sotheby's Hong Kong, 4th and 5th November 1997, lot 1371.

Like the few other known examples of this type, the sensitivity of the Qing craftsmen to absorb and reproduce the qualities of the Yongle original is remarkable and manifest in the present Yongzheng version. Two of the unmarked Yongzheng examples were in fact considered as Yongle originals, see Duncan Mackintosh, Chinese Blue and White Porcelain, Newton Abbot, 1977, pl. 55, and Daisy Lion-Goldschmidt, Ming Porcelain, London, 1978, pl. 14. For a discussion on Qing porcelains with 'redesigns' of Ming patterns including Yongzheng examples, compare Julian Thompson, Chinese Porcelain. The S.C. Ko Tianminlou Collection, Part II, Hong Kong, 1987, p. 29.