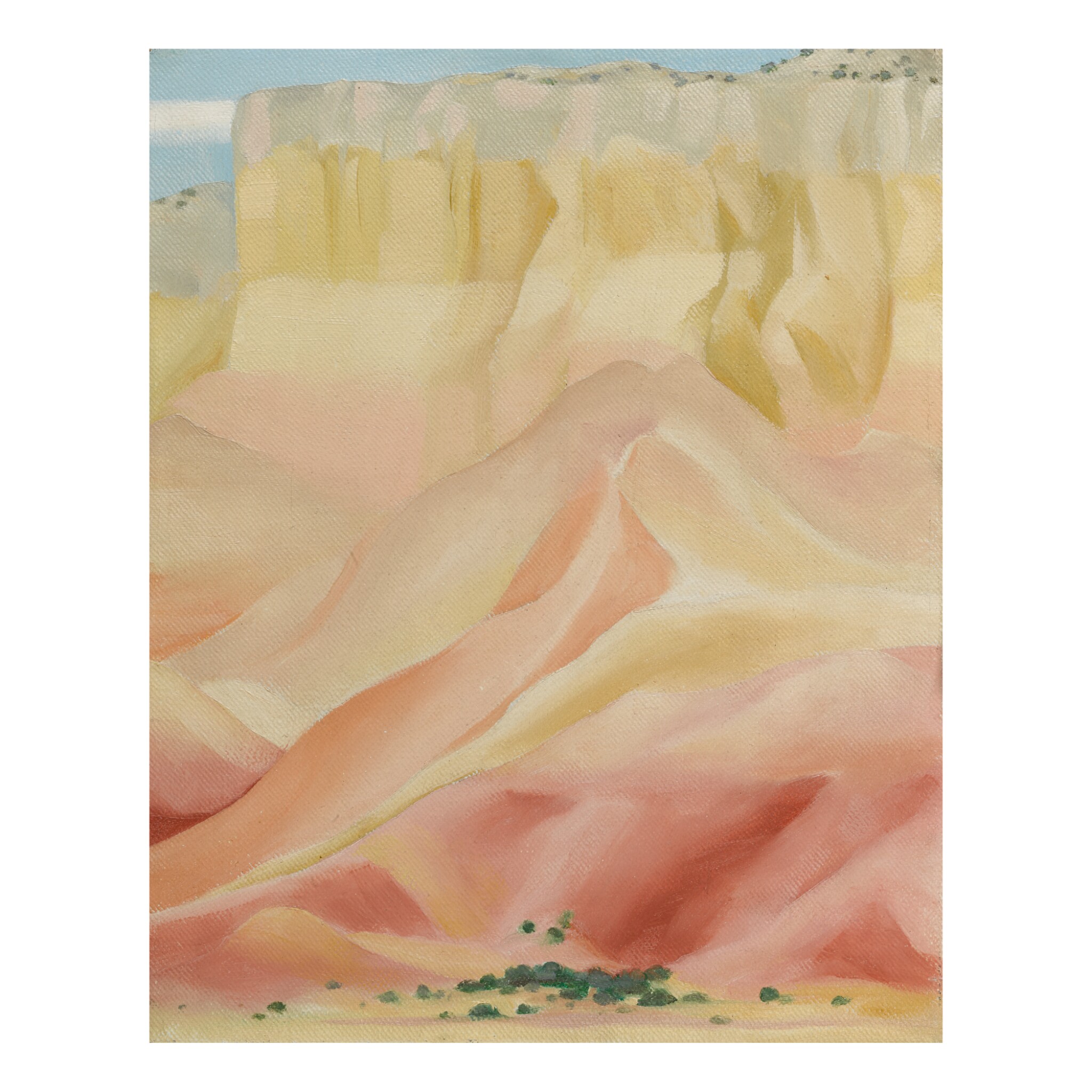 Acquired by the present owner from the above, 1982

In 1929 in an effort to escape city life, Georgia O'Keeffe left New York to spend the summer in New Mexico, a place she had briefly visited only once prior more than 10 years earlier. While the stark simplicity and expansiveness of desert landscape had always strongly appealed to her artistic sensibilities, this particular trip proved transformative for O’Keeffe both personally and artistically. “When I got to New Mexico that was mine,” she later articulated of how the environment captured her imagination. “As soon as I saw it that was my country. I’d never seen anything like it before, but it fitted me exactly. It’s something that’s in the air, it’s different. The sky is different, the wind is different” (quoted in Perry Miller Adato, Georgia O’Keeffe, 1977, film).

Painted in 1945, My Backyard, is part of an iconic series of works that depict the red and yellow cliffs near O'Keeffe's home in Abiquiu, Ghost Ranch, the place she made her permanent home in 1949. According to the artist “. . . (the) painting of the Cliffs (is) behind my home at Ghost Ranch in New Mexico. Most of the paintings I had done previously of the cliffs I had to do on location, while actually looking at the cliffs. This was the first time that I was able to paint them in my studio from memory – I was quite astonished and very proud of the little painting and considered it one of the best pictures in the exhibition at An American Place.” Here she renders the spectacular environment of her home with a softness and sensuality that causes it to slip between landscape and dreamlike abstraction. Suffused with a crystalline quality of light, O’Keeffe’s depiction of her backyard cliffs perfectly captures the rugged architectural forms and brilliant colors she found there—features that some believed had never before been so successfully translated by an American artist. "The Southwest has been painted often,” writes Lloyd Goodrich, “but often badly, by artists who believe that a beautiful subject produces a beautiful picture. But O'Keeffe translates this landscape into the language of art…Always her desert poetry is embodied in robust physical language, speaking to her senses" (Georgia O'Keeffe Retrospective Exhibition, New York, 1970, p. 22).

O’Keeffe emphasizes the drama of the desert setting by allowing the powerful, dramatic cliffs and rolling hills to dominate the composition, including only a small area of blue sky and clouds to imply that the viewer is closely positioned to these mountainous forms. O’Keeffe captures the intensity of the New Mexican light by applying passages of varying shades of brown, tan and rose—enlivened with small touches of green sagebrush—to render her subject. Her crisply defined contours and careful modeling of forms create sculptural depth on the picture plane, while simultaneously her disregard for traditional scale and spatial depth contributes to a modern sense of flattened patterning.

O’Keeffe’s partner, the influential photographer and gallerist Alfred Stieglitz, gave the present work its name when it was in the exhibition at An American Place in 1946. The title underscores the bond the artist felt with the landscape and the imagery of the Southwest, the place she described as uniquely “hers.” Indeed, in works such as My Backyard, O’Keeffe transcends a literal study of nature to evoke the spiritual connection she felt with the place. By doing so, she presents a vision of the American landscape that is compelling and distinctive. As the artist herself explained in 1977, “I used to think that somebody could teach me to paint a landscape. I hunted and hunted for that person and finally found that I had to do it myself” (quoted in Tom Zito, “Georgia O’Keeffe: At Home on Ghost Ranch, the Iconoclastic Artist at 90,” Washington Post, November 9, 1977, C1).