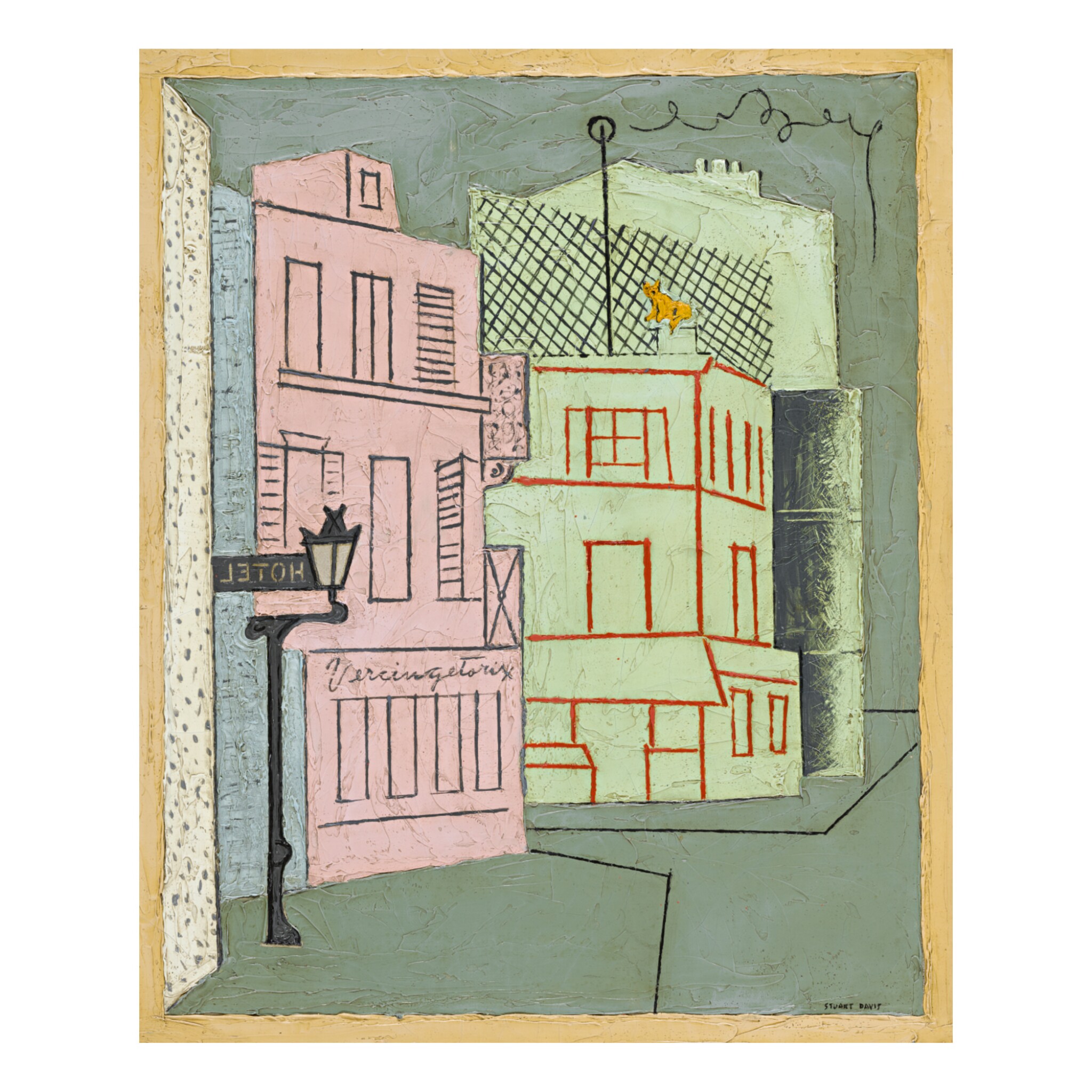 This work has been lined with glue as an adhesive. The texture of the paint layer seems to be unaffected by the lining. This is a very intentionally thick paint layer mostly applied with a palette knife. The artist added a patina to the paint layer, particularly in the vertical blue on the left side, which is original and should not be removed. Many Davis paintings from this particular period show noticeable abrasion because of mistaken attempts to remove this patina, but in this case the work is in beautiful condition. Under ultraviolet light, one can see a few spots of retouching in the windows in the pink house. No other retouches are apparent, although some of the paint around the edges reads slightly stronger, particularly along the bottom edge. The work should be hung as is.

Estate of the above

Acquired by the present owner from the above, 1993

Stuart Davis set sail for his first visit to Paris in June of 1928 at the age of thirty-five, thus embarking on a transformative period of aesthetic development. Over the course of the following year, he produced a series of seminal paintings that brilliantly synthesized aspects of his previous work with various influences he absorbed while abroad to establish the visual vocabulary that he would continue to explore for the remainder of his life. Rue Vercingétorix is a superb example from this pivotal moment in Davis’ career, compellingly demonstrating an evolution of his highly personal aesthetic lexicon, which fluently captured the dynamic character of the modern world.

Upon his arrival in Paris, Davis was immediately captivated by the character and architecture of the French capital, which he found dramatically different from the burgeoning and oppressive New York cityscape. In Paris he discovered reprieve as well as intellectual and artistic reinvigoration. He set up a studio at 50 rue Vercingétorix in the 14th arrondissement, which the present work depicts (Fig. 1). Among the first compositions the artist completed upon his arrival in the city, Rue Vercingétorix powerfully manifests Davis’ primary preoccupations during his time in Paris, aesthetic concerns he later outlined in a letter to his father: “I am primarily interested in the streets. There is great variety, from the most commonplace to the unique. A street of regular French working-class homes of 100 years ago is interesting because they are all different in regard to size, surface, number of windows, etc.” (quoted in Karen Wilkin, Stuart Davis, New York, 1987, p. 112). Resuming the practice from his art school days of sketching to record his impressions of Parisian culture, Davis spent much of his time observing the distinctive architecture and design that surrounded and enthralled him.

In Rue Vercingétorix, Davis presents a formally simplified yet highly energetic interpretation of his new home, distilling this small section of the cityscape into flattened planes of broad expanses of color that he enlivens with strong, graphic contours. Small, literal elements such as the orange cat perched atop one of the structures are typical of the artist’s work from this period. The artist’s increasing interest in creating a tactile surface in his painting is also fully on display here, as he thickly applies his pigment in areas like the gray background to create a stucco-like effect. In addition to texture, Davis also experimented with color in this period, at times testing the visual impact of monochromatic surfaces and in other cases using color to demarcate building facades, and often framing the compositions with a distinct colorful border.

It has been observed that Davis’ signature curving, calligraphic line first appears in these Parisian paintings, and in Rue Vercingétorix we see a graphic flourish in the sky denoting the smoke wafting from the city’s chimneys. This line continues to evolve, as scholar Patricia Hills notes, culminating in a robust, thickened form, which later becomes a singular element in Davis’ compositions. The artist’s fascination with the street signage he encountered throughout Paris reveals itself in the incorporation of text in the composition and he would continue to use words in his art in an increasingly dissociative fashion. On the pink structure at left he alludes to the graffiti that he saw in parts of the city. The result is a stylized composition that is evocative of the surrealist street scenes of Giorgio de Chirico and René Magritte and prescient of the work of Ed Ruscha, Wayne Thiebaud and Andy Warhol (Fig. 2).

Davis returned to New York from Paris in August of 1929 and exhibited his work from this period at The Downtown Gallery in January 1930. Lowrey Stokes Sims observes, “[a]lthough Davis never made it back to Paris, the particular juncture between abstraction and reality that he worked out in these paintings was to be characteristic of his art during the next decade” (Stuart Davis: American Painter, New York, 1991, p. 198). Davis would continue to apply the technical and creative advancements he made in Paris as well as the inspiration he gleaned from the city itself for the remainder of his career, revisiting these lessons explicitly at times in works such as The Paris Bit (Fig. 3), a work that represents, as Wanda Corn writes, “one of the artist’s most profound meditations on the ‘amazing continuity’ between his youthful art of the 1920s and his mature style of the 1950s” (The Great American Thing: Modern Art and National Identity, 1915-1945, Berkeley, California, 1999, p. 349).