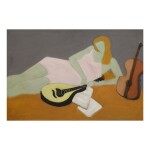 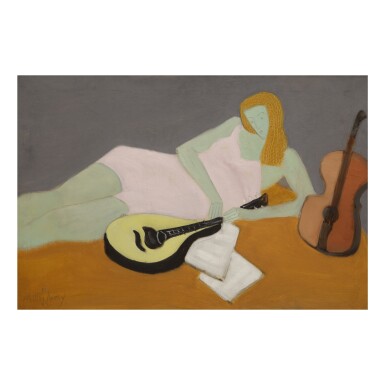 Acquired by the present owner from the above, 1998

Milton Avery painted Young Musician in 1945, by which time his mature style had fully emerged. Many scholars attribute the important stylistic developments in Avery’s work of this period to his new affiliation with Paul Rosenberg's gallery, as Avery's professional relationship with Rosenberg exposed him to the work of the modern European artists like Pablo Picasso and Henri Matisse, who Rosenberg also represented. Rosenberg arrived in the United States in 1940, bringing with him a supply of works by these artists. Avery began to study the work of Picasso in particular with renewed zeal. As he gained a deeper understanding of the current dialogue on abstraction, many of the works he produced began to echo the Spanish modern master both in their modulation of color and simplification of form.

In Young Musician Avery presents the traditional subject of a female figure in repose, accompanied by a mandolin, a guitar and sheet music. As is characteristic of his best works from the 1940s, in Young Musician Avery strips his composition of most extraneous details and defines the primary components of the picture as single, monochromatic color areas. Lyrical features such as the texture of the figure’s hair—which the artist achieved by dragging the end of his brush through the wet paint layer—further enliven the composition. His saturated palette of greens, blues, oranges and pinks is typical of his works from the mid-1940s, and imbues the work with a sense of warmth and intimacy.

Avery’s admiration for Picasso is on display here in both his subject matter and the treatment of his forms. However, works such as Young Musician ultimately attest to Avery’s admiration for modern literature as well as painting. Indeed, Avery was particularly fond of the poet Wallace Stevens, often quoting aloud from his favorite work by the writer, “The Man with the Blue Guitar.” Stevens’ stanzas, which were inspired by Picasso’s 1903 Blue Period masterpiece The Old Guitarist, comment on the interrelationship of life and art and the power of creativity and imagination to alter one’s reality. As such, images of musicians and musical instruments became Avery's personal symbols of this capacity, and began to appear frequently throughout his body of work.