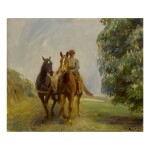 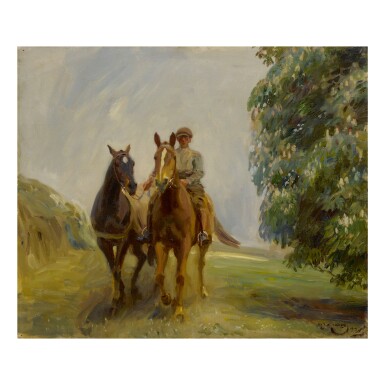 Private Collector (acquired at the above sale)

Possibly, London, Leicester Galleries, The English Scene, 1947, no. 80 (as Hunters at Exercise)

Though he was small in stature, Fountain George Page, a horse handler working in Norwich in the early 1900s, was one of Munnings’ most famous models—the aptly nicknamed “Shrimp.” The artist was first introduced to Shrimp by his employer, the horse dealer Drake, and upon their meeting, Munnings found him an “undersized, tough, artful young brigand” (Sir Alfred James Munnings, An Artist’s Life, London, 1950, p. 207). Though the two had an often combative relationship, Shrimp, who “slept under the caravan with the dogs, and had no home of his own, no family ties, no parents that he knew,” would become “an indispensable model, an inspiring rogue, an annoying villain” for the artist (An Artist's Life, p. 207). Shrimp prominently appeared in a number of Munnings' compositions from 1908 through 1912, with the present work probably among the last of the series.

Shrimp's heritage — in addition to his skill with horses — made him a particularly intriguing model for Munnings. Shrimp with Two Hunters was painted after a period of several years during which Munnings spent his summers travelling through the English countryside as a vagabond, in a romanticized imitation of the gypsies who fascinated him. The gypsies traveled in caravans, working as hop-pickers, horse traders, itinerant laborers and roundabouts for traveling fairs. Munnings saw them as a poignant symbol of England’s rural life, one then threatened with industrialization and mechanized farming, further influenced by the writings of George Burrow, popular author and founder of the Gypsy Lore Society. Artists such as Augustus John and others in the Newlyn School shared Munnings’ interest in the nomadic and exotic-seeming people. At the same time, Munnings continued to explore his long-standing interest in the hunt, and by 1912 had painted several scenes of red-coated riders on powerful horses observed in the great vistas of Cornwall’s countryside. Seemingly on opposite sides of social history, England’s rural people and the refined hunting traditions of Britain’s great country homes are combined in the present work. Eschewing the ponies of Munnings’ earlier Shrimp compositions, in the present work, the groom rides a sleek light chestnut hunter while holding the reins of what appears to be the artist’s own Bay Mare, one of his most important equine models of the time. The artist gives Shrimp the same heroic, visual stature as many of the more traditional huntsmen he painted. Munnings' naturalistic technique, coupled with impressionistic vigor, infuses the composition with a sense of movement; light and dark green swipes of paint suggest the open landscape rushing past the group, who appear to be about to move out of the picture space.