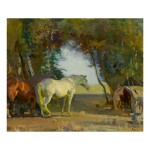 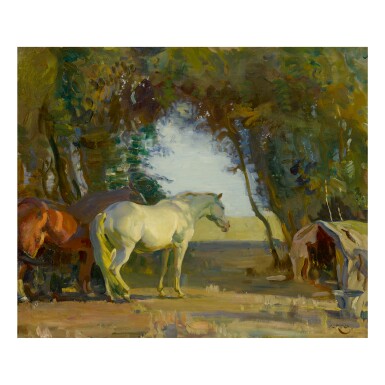 Sir Alfred James Munnings first met the gypsy hop-pickers in 1913 in Binstead, near Alton, Hampshire, where they gathered each year at the end of August, pitching tents and caravans for the duration of the season. The artist was so fascinated with these travelling people that he returned to paint them each autumn for nearly fifteen years. Several works from this period are set in a landscape similar to Hampshire Thorn Trees, with its sun-filled open field bordered by spindly-trunked thorn trees. This dense area offered shelter for resting horses, campground, and a compelling location for Munnings, as in the present work, to explore the shifting effects of light and shadow turning the bay’s hide from rose to ruddy red and the white from gold-green to purple-pink. In his autobiography, Munnings described the fields of Binsted, where “standing along the hedges… were caravans of all shapes, sizes and descriptions; round, romany [sic], bee-hive tents; old Army bell-tents. There were at least two to three hundred souls, men, women, and children— not including dogs and horses— camped in this pasture” (Sir Alfred James Munnings, An Artist’s Life, London, 1954, p. 288). One such shelter is visible at the margin of the present work, where the artist uses his characteristically evocative palette to seamlessly blend the earthy tones of the worn canvas into the grassy ground. Though the composition is unpopulated, the vigorous paintwork conveys Munnings' presence and intimacy with his subject. Munnings had direct experience of gypsy life, having spent time roaming the countryside in a horse-drawn painted caravan filled with paints and canvases with his hired groom Shrimp (see lot 74). He stopped where a subject presented itself, and spent his evenings camping out; perhaps rather than a hop-pickers settlement, the tent seen here is the artist’s own.