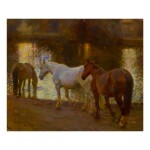 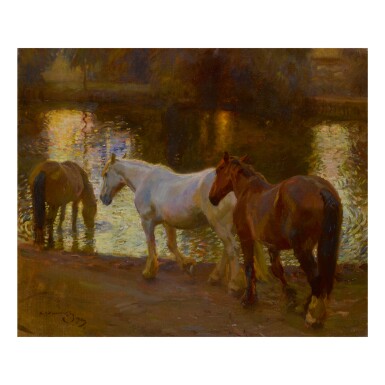 EVENING AT MENDHAM (THE FORD)

Evening at Mendham (The Ford) reflects Sir Alfred James Munnings’ life-long fascination with the effects of light and water. Painted in 1909 near Mendham, the artist’s birthplace, the present work catches the last moments of light before the sun sets on the River Waveney, which forms the border between Suffolk and Norfolk. As the artist wrote in his autobiography An Artist's Life, “Seeing the ponies there, drinking, started me off afresh. Not satisfied with day work, I began a large evening picture, the sun setting almost opposite… The water bright gold, with long, striped reflections; the white ponies mauve against the fold, the others a dark mass” (Sir Alfred James Munnings, An Artist's Life, London, 1950, p. 239). Three horses walk towards the water, where a light breeze splits the surface into flickering light and brilliant color. Munnings renders the shadows over the river and the horses in vibrant blues and purples, highlighted with red and golden yellows. The setting sun is reflected and magnified in the water, where concentric circles from the wading horse at far left create the serpentine reflection of a tree trunk. The lack of human interaction and intervention suggests that the horses are at one with nature, yet the artist must be close in this fleeting scene. In the next moment the ripples will fade, the sun will set and the ponies will be shrouded in darkness.

As Munnings explained in his autobiography, "the mere sight of these ponies, coming or going gave me fresh pictures. Like a game of chess, there was no end to it" (An Artist's Life, p. 238). These ponies were Munnings’ principal equine models, notably Augereau, the striking white colt at center. He was purchased in 1908 from the horse trader James Drake, through whom Munnings also met the deft horse-handler and model Fountain Page, better known as Shrimp (see lot 74). Augereau was named by Munnings after seeing a matinee performance of a play called A Royal Divorce in which a character continuously exclaims, "I swear it on the word of an Augereau." Driving the pony home after the theater late at night, whenever the pony misbehaved, Munnings and his groom would correct him and exclaim, "I swear it on the word of an Augereau!" Munnings wrote of this striking pony “Augereau was the most picturesque of white ponies – an artist’s ideal” (An Artist's Life, p. 199) and “[he] paid his keep and mine a thousandfold” (An Artist's Life, p. 236).