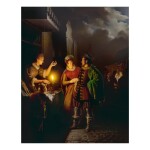 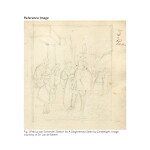 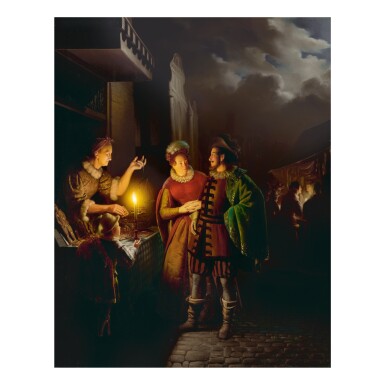 A GINGERBREAD SELLER BY CANDLELIGHT

We would like to thank Dr. Jan de Meere for kindly confirming the authenticity of this lot.

The following condition report was kindly provided by Simon Parkes Art Conservation, Inc.: This work is in beautiful condition. The panel is flat and unreinforced on the reverse. The paint layer is stable, clean and varnished. There is only one small line of retouches in the lower right corner. The work should be hung in its current state.

Not seen in over thirty years and known only from a black and white image, A Gingerbread Seller by Candlelight is a rare historicizing market scene by Petrus van Schendel. Painted in 1838, it likely depicts one of the myriad markets in Rotterdam, where the artist lived from 1832-1838. Van Schendel first depicted this composition in his liber veritas sketchbook, a sketch he later amended with an inscription about the painting and its size in the margins (fig. 1).

The soft light of the unseen moon diffuses through the clouds at upper right and reveals the facades of the trading houses surrounding the square. A large, bright taper illuminates a man and woman, dressed in fine seventeenth century costume, while the shopkeeper and her young charge measure out on a golden scale the most charming commodity – gingerbread. Cookies and biscuits shaped as houses are carefully piled in baskets and on the table, while an array of gingerbread figures, ranging from an impressively large soldier to smaller male and female figures, are arranged upright to highlight their size and detail. These cookies are decorated with foil or gold leaf, traditional in the sixteenth and seventeenth centuries, which glints in the flickering candlelight.

Ginger root, with its medicinal qualities, was first cultivated in China and spread to Europe via the Silk Road. While descriptions of gingerbread have been found in ancient Greece, Europeans fashioned their own recipes for the hard cookies in the Middle Ages, while Queen Elizabeth I is credited with the idea to frost and decorate them. While most often associated to Christmas, the treats were available at markets and fairs throughout the year, where they took on different shapes and motifs to reflect the changing seasons. The Brothers Grimm even placed the witch in Hansel and Gretel, first printed in 1812, in a delicious gingerbread cottage, irresistible to the two children.