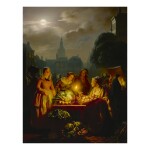 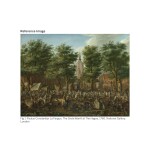 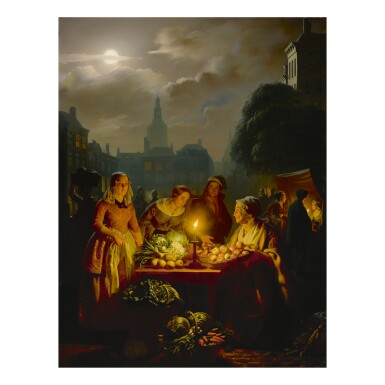 We would like to thank Dr. Jan de Meere for kindly confirming the authenticity of this lot.

The following condition report was kindly provided by Simon Parkes Art Conservation, Inc.: This work is in beautiful condition. The panel on which it is painted is flat. The paint layer is stable, clean and varnished. Under ultraviolet light, one can see two retouches in the side of the table in the lower center, and possibly another above the basket of carrots in the lower center. In the sky, there is one small retouching at the top of the steeple in the center. There is another area of retouching in the upper right sky which is about 1 ¼ inches in length. The figures are unretouched. The work should be hung in its current state.

Under a full moon, a bustling scene in The Hague’s Grote Markt unfolds into an evocative narrative of Dutch life. Despite the late hour, the market heaves with shoppers, their profiles visible in the shadows and illuminated by the distant candlelight of stalls. At the center is a veritable cornucopia of vegetables and fruit, carefully rendered in swaths of light and shadow, from cabbage and cauliflower to carrots, leeks, onions and apples. Lit by the bright light of a taper, a benevolent seller shares her produce with an interested customer, who leans closer to the light to inspect. Another woman, with a piece of lace pinned over her dark hair, looks directly out of the composition, unaware of the approving glance cast at her by the handsome young man behind her. High above the bustling scene, alongside the warehouses and trading houses that line the square, the tower of Sint-Jacobskerk is illuminated.

A market was first held on the site of the Grote Markt in 1614, accessible to farmers via the Prisengracht canal (filled in at the end of the nineteenth century). Initially a fruit and vegetable market, it grew to include butter, cheese and flowers and was the largest market in the city by the eighteenth century. An important part of daily life, the Grote Markt and Sint-Jacobskerk appeared often on canvas, such as in Bartholomeus van der Helst’s 1652 portrait of Mary Stuart, Princess of Orange, as Widow of William II, where the buzzing market is visible in the distance (Rijksmuseum, Amsterdam), or Paulus Constantijn La Fargue’s expansive view of hundreds of residents under the shade of trees and the tower of Sint-Jacobskerk (fig. 1, 1760, National Gallery, London).

Inspired by Dutch genre-painters of the Golden Age, notably Godfried Schalcken (1643-1706), Gerrit Dou (1613-1675), and the Utrecht Caravaggisti, Petrus van Schendel grew up in Breda and trained at the Academy of Fine Arts in Antwerp. By the early 1850s, van Schendel was at the height of his artistic powers and had an international reputation. Queen Victoria acquired a work by the artist through the dealer C.J. Nieuwenhuijs as a birthday present for Prince Albert, and it remains in the British Royal Collection.