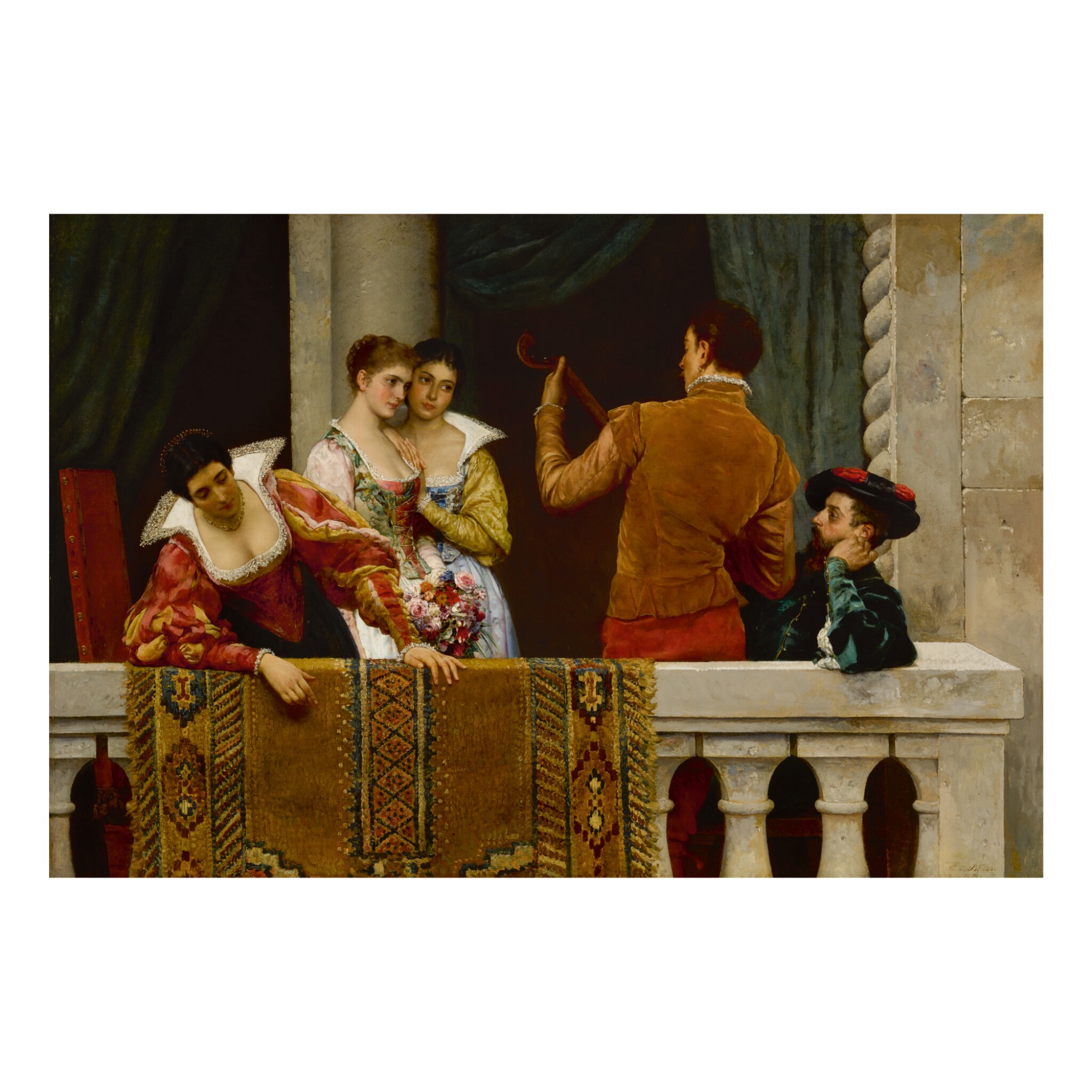 Festival Day, Venice is an early, ambitious composition, sumptuously painted and revealing Eugen von Blass' study of the techniques of Titian and the Venetian masters. While a troubadour serenades a beautiful young woman and her friend, a chaperone looks over the balcony at the implied festivities below. Set within a shallow picture space, the figures are staged as if in an opera. Indeed, just as Amilcare Ponchielli’s La Giaconda or Rossini’s Otello transport audiences to Venice’s glorious past, the colorful troubadour costumes remind viewers of the city’s history and defining artistic legacy.

Playful narratives emerge throughout von Blaas’ oeuvre, represented by a sly smile or a longing gaze, whether the figures are in Renaissance costume or the colorful dress of a fruit seller or laundresses. As the artist's biographer Thomas Wassibauer describes, “[von Blaas] contrasted the decaying grandeur of old Venetian stone with fresh flowers and fruit… his young people live their lives within the old walls of a still-important city, and become links in an apparently endless chain of generations who carry on the Venetian traditions and way of life” (Wassibauer, p. 19). Rather than selecting an excessive amount of props or portraying a complicated narrative, von Blaas creates a tightly arranged composition, with well-placed, richly described details. The artist takes pleasure in using his brush to describe the textured surfaces throughout, including the velvet jackets, lace collars, silk gowns and broadly woven kilim rug hanging over the balustrade.

As Wassibauer additionally writes: "It is a further development of one of the painter's regular themes which he illustrates both in historical costume, as in this instance, and in 19th Century dress. In a broadly based composition young girls and a gallant, presumably their host, are depicted listening to a guitar player dressed in red velvet. The heads of the figures are placed in a partial semi-circle, seen from the back. Each is looking in a different direction... the rich clothing and the ... oriental carpet (that) has been draped over the balcony ... was a typical practice on major feast days in Austria as a way of displaying the wealth of the household and the joy of participating in the celebrations. Many rugs produced in the Orient for export to Europe were made to fit the width of standard windows so that they could be hung without being folded. The color composition is of the picture is masterly, with red tones for the figures and green for the curtains and the costume of the presumed host, who watches the scene from the right" (Wassibauer, p. 17-18).

Growing up in a family of painters, von Blaas followed a course of study that encouraged his artistic abilities. Trained at the Academy of Venice, where his father, Carl von Blaas, was an instructor, von Blaas' early works reveal an instinctive talent and ready aptitude for painting. Festival Day, Venice is an exceptional work from this period, notable for its large scale, and until recently has been known only from a black and white photograph. Long untraced, this work is emerging from a private collection for the first time in more than forty years.