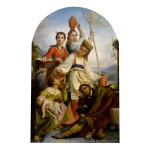 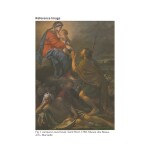 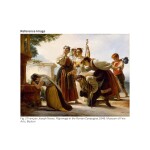 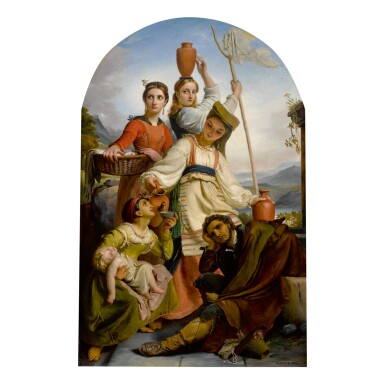 We would like to thank Alain Jacobs for kindly confirming the authenticity of this lot, which will be included in his forthcoming catalogue raisonné on the artist.

Probably, the artist's wife's family (acquired directly from the artist)

Charles Hamoir (by descent from the above, his uncle)

Private Collection (by descent from the above, her father)

François-Joseph Navez began his training at the Brussels Académie des Beaux-Arts and, after winning first prize at the 1812 Ghent Salon, received a travel grant to Paris. There he trained with Neoclassical master Jacques-Louis David, whose influence on his art and technique is immediately evident in the present lot. The classical, triangular positioning of idealized figures; dramatized, heightened expressions; and strong colors of Jeune fille à la fontaine recall both the classical and religious compositions of David (fig. 1). Considered David’s disciple and one of his most successful pupils, Navez accompanied his master to Brussels when he was exiled from France upon the fall of the Napoleonic Empire in 1816. He worked for David for another year before traveling to Rome to complete his studies.

A further important influence was his friend Jean-Auguste-Dominique Ingres who, along with the Nazarenes, Navez admired while traveling to Rome and Italy’s countryside from 1817 to 1822. In July 1819, Navez, along with his fellow artists Léopold Robert, Achille-Etna Michallon, and Jean-Victor Schentz, witnessed the marching of vanquished brigands and their families from the nearby village of Sonnino to their imprisonment by Papal troops in Rome. In the following years, the Sonnino people and their regional costumes and traditions inspired Navez’s didactic illustrations, as well as complex multi-figural compositions of pilgrimages and processional, such as the present work.

On his return to Brussels in the 1820s Navez became director of the Académie and, after a brief detour to a more Romantic style, by the 1840s he returned to the technique of his early period with renewed energy and a sense of nostalgia as evocatively illustrated in the present work and notable others, including Pilgrimage in the Roman Campagna (fig. 2). Aptly recorded as La Fontaine in the artist’s early biography, the women in the present work offer refreshment to weary travelers; the compositional arrangement of the figures holding clay jugs of water poured into waiting bowls echoes a fountain’s form. The generosity and appreciation of the gesture is easily read in his models’ expressions, and the affinity between artist and subject is suggested by the work’s provenance: the painting was given to his wife’s family before passing to Alphonse de Potter, a descendant of Belgian journalist Louis de Potter, Navez’s close friend during his time in Rome.