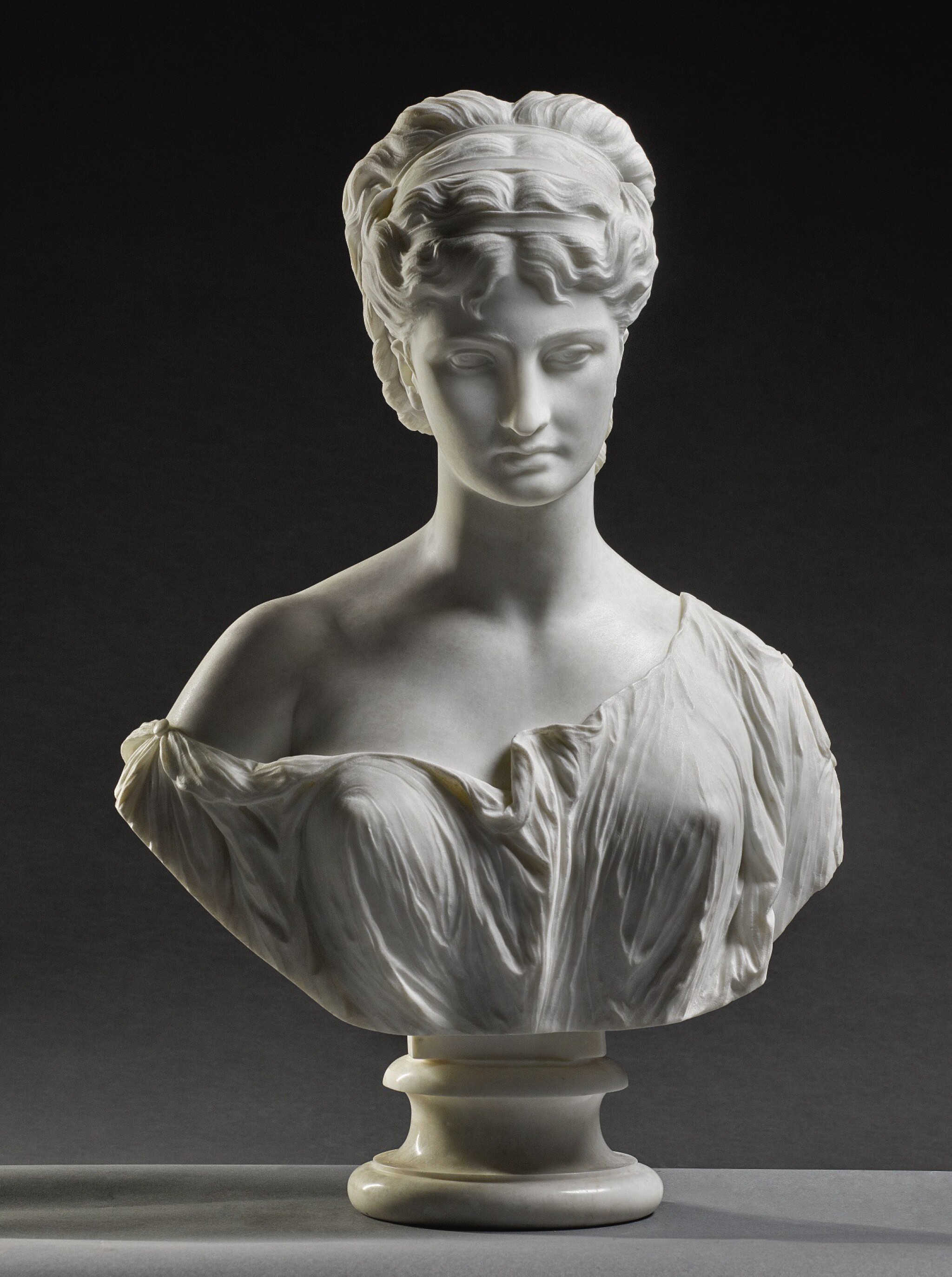 Overall the condition of the marble is very good with minor dirt and wear to the surface consistent with age. There is natural veining to the marble consistent with the material, particularly across the back, and elsewhere minor veining including at the proper left cheek. The socle is probably original, there are some very minor small chips at the joint at both edges. The marble has a very slight and subtle greyish/white hue in a few areas. The view of the cataloguer is that it is probably natural to the stone. There are some very small possible restorations to the upper part of the socle

La Ceinture dorée is thought to have been commissioned in 1871 by Madame de Cassin who had suggested that Épinay carve a representation of 'la femme moderne'. It was unveiled by Épinay at the Paris Salon of 1874. Carved in the Neo-Greek style of the Second Empire, La Ceinture dorée is ultimately inspired by an earlier tradition of 19th-century idealised nudes exemplified by Antonio Canova's Cupid and Psyche Standing (musée du Louvre, inv. no. MR 1776) and James Pradier's Phryne (1845). Épinay's masterpiece shows a young woman standing contrapposto, delicately clasping a golden belt below the breast. It is imbued with an elegant classicism which counterbalances the innate eroticism of the composition.

La Ceinture dorée received considerable public acclaim when it was first exhibited at the Salon of 1874, but inspired vitriolic criticism from members of the artistic establishment, who labelled it an abomination, an indecent vision of a prostitute, at odds with the Second Empire concept of la bonne renommée. Despite this, the public flocked to see Épinay's masterpiece, and Falguière defended the work, arguing that whilst the figure was not in the tradition of the Ecole des Beaux Arts and it would be inappropriate to award the sculptor with the Prix de Rome, he was deserving of the médaille d'honneur. This is indeed what happened. When Épinay exhibited La Ceinture dorée at the 1878 International Exhibition he was awarded the Légion d'Honneur as an English artist. Lifesize versions of La Ceinture dorée were commissioned by Tsar Alexander III of Russia for the Hermitage, and by the King William III of Holland for the Palais Het Loo.

This newly discovered bust marks an attempt by Épinay to blend the most beautiful characteristics of his two seminal models. Unlike the full scale models, here the sculptor has bound the woman's hair with a fillet (a typical device in antique sculpture). Épinay has presented the woman clothed in drapes which again recall the Parthenon figures, but here the drapery delicately slips down the shoulder and, in an erotically charged arrangement, seems to be about to reveal the breast, the form of which is faintly visible beneath the gossamer fabric. Given the relation to La Ceinture dorée and La bonne renommée it seems probable that the present bust was conceived after 1885 and is likely to have been carved in the last quarter of the 19th century.