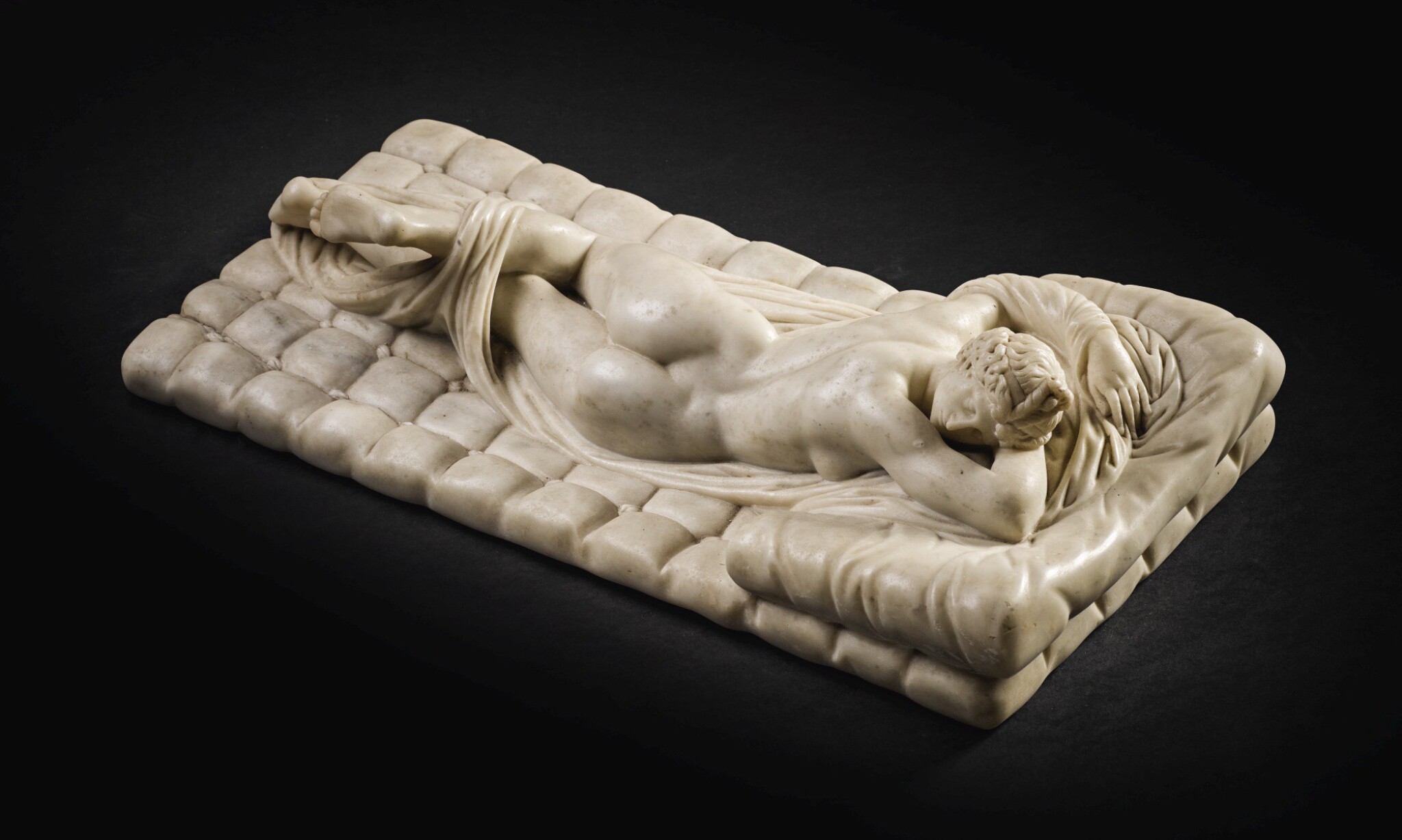 white marble, on a veined black marble base and columned wood plinth

Overall the condition of the marble is good with minor dirt and wear to the surface consistent with age. This is a particularly nice quality version of the famous antique model with a good quality probably original wood base. There is particular dirt to the back which gives the marble a mottled appearance; the marble would thus benefit from a professional clean. The proper left toes are reattached with the original piece. There is natural veining to the marble consistent with the material including a slightly open vein in the mattress, bottom left corner. There are minor abrasions to some of the edges, including to the cushion. Minor wear to the separate green marble base. The wood base is in good condition with general wear. It's composed in sections and has joints and there is some wear to some of the edges. There are some splashes of paint and dirt.

'Sex to sweet sex with lips and limbs is wed' are the words with which Swinburne enshrined the iconic Sleeping Hermaphrodite in his poetry. Discovered in Rome before 1620, the ancient Roman marble - after a presumed Hellenistic bronze - was famously restored by Gianlorenzo Bernini, who added the quilted mattress upon which the sleeping figure rests. The Hermaphrodite was installed in the Villa Borghese as part of Cardinal Scipione Borghe's collection by 1638 and soon rose to fame as one of the most celebrated marbles in Rome. Its subject is Hermaphroditos, the son of Aphrodite and Hermes, whose form was merged with that of a water nymph, resulting in his androgynous status, which is laid bare in the statue. Viewers in the 17th and 18th centuries were inevitably compelled by the titillating compositon, with reactions ranging from distaste and shame to admiration and amusement. Lady Townshend quipped that the model represented 'the only happy couple she ever saw' (Haskell and Penny, op. cit., p. 235). The statue's fame resulted in the commissioning of various copies, of which some omit the vital addition of the penis. Though frequently copied in bronze, reductions in marble are more rare. Purchased by Napoleon in 1807, the Borghese Hermaphrodite is now among the main attractions of ancient statuary at the musée du Louvre, eclipsing in fame a number of other Roman versions of the subject.