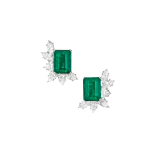 established 1960
Interested in selling a work by Graff?
Request an Estimate

Lots by Graff at Sotheby's

The story of the jewellery house Graff is inseparable from the life of its charismatic and visionary founder, Laurence Graff. Born in 1938 to Romanian and Russian parents in Stepney, east London, Graff began his journey to the top of the jewellery industry with an apprenticeship at the local jewellers Schindler, before working independently as a jewellery designer, supplying several jewellers across the UK. In 1960 he founded Graff diamonds, forming lasting relationships with some of the world’s most important jewellery collectors, including the 29th Sultan of Brunei. Over the following decades, Graff built his company into a global empire, now with over 50 stores worldwide.

Graff’s extraordinary success rests on his innate understanding of diamonds and his insistence on perfectly proportioned cuts, optimising the brilliance, colour and overall quality of every stone he handles. This passion and affinity for both diamonds and coloured stones has brought many of the world’s rarest and most beautiful jewels into his orbit, including the and the 8.62 carat Graff ruby, and the record-breaking Graff Pink, a 24.78 carat Fancy Intense Pink diamond, sold at Sotheby’s Geneva in 2010 and 2014 respectively.