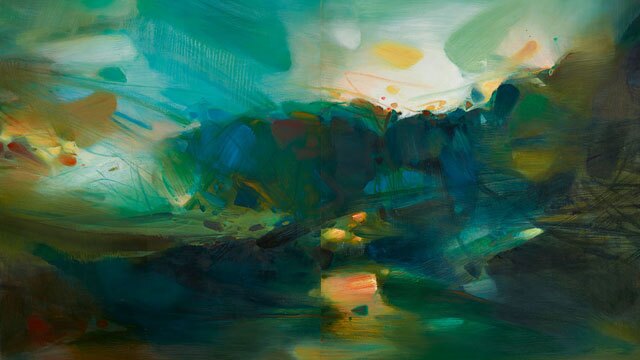 The Modern Art Evening Sale presents an exquisite selection of masterpieces, led by works of Sanyu and Chu Teh-Chun. Created during Sanyu’s new expressive peak in the 1950s, Quatre nus demonstrates the artist’s awe of the female nude in all its vitality. Veneration of the female form provided the impetus for an extraordinary body of work, and Quatre nus is arguably the most alluring nude masterpiece. Sanyu did not often depict female nudes in groups, and for such a work to appear on the market is in itself a rare event, not to mention such a painting on a grand scale. The present lot is also the only masterpiece throughout Sanyu’s career for which he went through painstaking effort of creating three oil paintings of similar composition to perfect. Quatre nus certainly represented a work of great significance to the artist himself.

Les éléments confédérés is the largest Chu Teh-Chun oil painting in private hands and the only pentaptych by the artist. Executed between 1983 and 1984, the work was painted upon Chu’s return to Asia and marked the beginning of a new chapter in his career:  in 1987, the National Museum of History in Taipei held a large retrospective exhibition for Chu, marking his formal return to Chinese society after residing in France for 32 years. In 1990 and 1991, this work was the focal point of Chu’s “Grand Formats” exhibitions at the Pyramid Pernod in Créteil, and Musée d’Art Contemporain in Dunkerque, France. Chosen as the catalogue cover for Chu’s retrospective exhibition at the National Art Museum of China in Beijing in 2010, Les éléments confédérés was the most important work to feature in the show, a testament to the painting’s significance in the eyes of the artist. According to Madame Chu Ching-Chao, the wife of Chu, the choice of a pentaptych echoes the Chinese philosophy of the Five Elements; and the rich layers of green pay tribute to nature and Beethoven’s symphony N°9, an expression of the artist’s passion for his motherland.