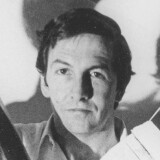 Born 1925. Died 2008.
Interested in selling a work by Robert Rauschenberg?
Request an Estimate

Works by Robert Rauschenberg at Sotheby's

One of the most influential American artists of the 20th century, Robert Rauschenberg (1925–2008) pioneered the radical blending of materials and methods within his paintings, paving the way for the Pop art movement and later generations. By incorporating newspapers and other mass media, debris and objects found on New York City streets, his works abolished the boundaries between painting and sculpture (both were present in a single work) and engaged in dialogue with viewers and the surrounding world.

Trained at the Kansas City Art Institue, the Académie Julien in Paris and Black Mountain College in North Carolina, Rauschenberg moved to New York in 1950 as Abstract Expressionism was reaching maturity. After two monochromatic series in 1951, his “Red Paintings” (53–54) initiated the addition of nails, newsprint and wood to the canvas, tranforming it into a complex surface. As the artist’s found sculptural elements grew larger, Rauschenberg’s paintings became known as “Combines,” The Bed (1955) being his most famous. Starting in the late 1950s, his “Combines” incorporated sound and motors, as in Broadcast (1959), along with silkscreen tranfers, as in Retroactive (1964).

Starting in 1970, Rauschenberg based himself on Captiva Island, Florida. His paintings expanded in scale and use of color, culminating in The ¼ Mile or 2 Furlong Piece (1981–98). Forever experimenting, Rauschenberg printed his images on textiles and transferred them onto reflective metals; he also embraced Iris digital Iris prints and the use of biodegradable dyes for his transfers in the 1990s

Museums with Works by Robert Rauschenberg

Artist Image: Steve Schapiro/Corbis via Getty Images
Please note that prior performance of the indexes and realized returns contained herein does not guarantee future results. In addition, there is no guarantee that random collections of individual works of art or stocks will yield index returns. We are not financial advisors and we are not in the business of recommending art as an investment. We also have no comparative advantage in forecasting the future direction of the art market. Investment decisions should be based on the risk return tolerance and time horizon of the investor with, if desired, the support of a licensed financial advisor. This information is provided "as is" and with no representations or warranties either express or implied of accuracy, merchantability, fitness for a particular purpose or of any other nature are made with respect to this information or to any expressed views presented in this information.