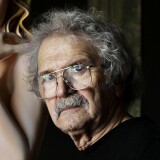 Born 1935.
Interested in selling a work by Mel Ramos?
Request an Estimate

Works by Mel Ramos at Sotheby's

Mel Ramos was an American Pop Artist best known for his paintings of nude women paired with everyday consumer goods including cigarette packs, candy, martini glasses and other popular items. The polished look of Ramos’s paintings draws from the aesthetics of mass media advertisements – as well as the work of his fellow Pop artists including Andy Warhol and Roy Lichtenstein. The blatancy of his work satirizes the commodification of the female body in the service of capitalism and consumer culture in the 20th and 21st centuries.

Born in 1935 to first generation Portuguese Azorean parents in Sacramento, California, Ramos completed his BA and MA at Sacramento State College, studying under painter Wayne Thiebaud. He was heavily influenced by Superman and Wonder Woman comics, which he would later synthesize with the visual qualities of pinup posters. He was one of the first artists to elevate such aesthetics to the fine arts, and was among the twelve artists included in the seminal 1963 Pop Art exhibition at the Los Angeles County Museum of Art that initiated Pop Art and established it at the forefront of the avant-garde. He spent many decades of his life as a dedicated teacher at California State University, East Bay, and was an Artist in Residence at Syracuse University and the University of Wisconsin.

The Crocker Art Museum mounted a retrospective of over 50 years of his works in 2012, the first major exhibition of his work in his hometown. The meticulous nature with which Ramos painted, and his full time teaching job led to a scarcity of his works, particularly in relation to his fellow Pop Artists; there are fewer than 1,000 Ramos paintings. A.C. Annie sold at Sotheby’s in 2012 for $1.07 million, more than 5 times its estimate. Ramos’ works feature in the collections of the Whitney Museum of American Art, New York; the San Francisco Museum of Modern Art; the Museum of Contemporary Art in Los Angeles, and many other institutions.

Museums with Works by Mel Ramos

Artist Image: 2010 CS Media
Please note that prior performance of the indexes and realized returns contained herein does not guarantee future results. In addition, there is no guarantee that random collections of individual works of art or stocks will yield index returns. We are not financial advisors and we are not in the business of recommending art as an investment. We also have no comparative advantage in forecasting the future direction of the art market. Investment decisions should be based on the risk return tolerance and time horizon of the investor with, if desired, the support of a licensed financial advisor. This information is provided "as is" and with no representations or warranties either express or implied of accuracy, merchantability, fitness for a particular purpose or of any other nature are made with respect to this information or to any expressed views presented in this information.