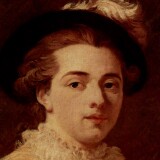 Born 1732. Died 1806.
Interested in selling a work by Jean-Honoré Fragonard?
Get an Estimate

Works by Jean-Honoré Fragonard at Sotheby's

Born in 1732 in Grasse, France, Jean-Honoré Fragonard is perhaps synonymous with the French Rococo style. Fragonard’s family moved to Paris in 1738, where his talent for painting was recognized early on, and at the age of eighteen he joined the studio of François Boucher. In 1832, he competed for the Prix de Rome for the first time and won the prestigious competition. Shortly after this, and with the help of his accomplishments, Fragonard undertook formal training in history painting at the École Royale de Élèves Protégés, Paris, before undertaking further training at the French Academy in Rome between 1756 and 1761.

Fragonard returned to Paris in 1761, and his career began to thrive; he was so sought after that he was able to reject royal commissions to instead work for private collectors, a career choice that allowed him to freely develop his personal style. The bulk of his oeuvre is marked by a high, level of decorativeness, liveliness, and even hedonism by way of his common use of classical and allegorical subject matter. Later in his career, tastes shifted to Neoclassicism, a style antithetical to his own, and his career fell into steep decline. The French Revolution further diminished Fragonard’s prospects, and after the war he held several administrative positions at the Louvre before dying in relative obscurity in 1806.

Despite the tribulations of Fragonard’s late artistic endeavors, his work has come to be treasured by many major collections, including the Frick Collection, New York; the Louvre Museum, Paris; the National Gallery of Art, Washington, DC; and the Hermitage Museum, Saint Petersburg.

Museums with Works by Jean-Honoré Fragonard