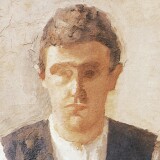 Born 1890. Died 1964.
Interested in selling a work by Giorgio Morandi?
Get an Estimate

Works by Giorgio Morandi at Sotheby's

Once proclaimed by the influential art historian Roberto Longhi as perhaps the greatest painter in Italy of the early 20th century, Giorgio Morandi’s oeuvre and legacy has come to be recognized as a truly unique and influential force within the development of modern art. Born in Bologna in 1890, Morandi was known for having a quiet and contemplative demeanor, and a reclusive nature that can perhaps be interpreted through both his subtle painting techniques and the fact that he spent the majority of his life in the same city he was born in. Early in his life, his father had hopes that his son would follow him into the export business, but despite his fathers wishes Morandi enrolled at the Bologna Academy of Fine Arts in 1907. While attending the Academy, he was exposed to contemporary movements such as Futurism and Cubism—both influences are visible in his early work—as well as Old Master painting, a subject area that clearly had an effect on his artistic practice, as he wrote in his autobiography that “only an understanding of the most vital achievements in painting . . . could help me find my way.”

After a brief stint in the Italian army during World War I, with his conscription drastically shortened due to a breakdown caused by what can only be called over-socialization for the naturally reclusive artist, he continued to paint, albeit at a slower rate, in his home studio. As his style matured, he adopted a distinctly modernist approach to his work, with the subject matter of his oeuvre being overwhelmingly of everyday, banal objects and landscapes done in a subtle, tonal palette. He also focused largely on brushwork and understated alterations to arrangement within the canvas. Despite his work being somewhat at odds with contemporaneous avant-gardes, Morandi was still recognized as an important and influential modern artist; in the last decades of his career he garnered praise and recognition at several international exhibitions, including the 1948 Venice Biennale, 1957 Sao Paulo Biennale (winning the Grand Prize for painting over both Marc Chagall and Jackson Pollock), and Documenta 2 in 1959. He was also included in the seminal Twentieth-Century Italian Art exhibition at the Museum of Modern Art, New York, in 1949.

After his death in 1964 from lung cancer (unsurprising to those who knew him, as he was said to have rarely spent a moment without a cigarette in his hand), Morandi’s work continued to have a distinct impact on subsequent generations of artists and movements, and his work has come to be included in many premier art collections. Additionally, Morandi made headlines in 2009 when President Barack Obama chose two small oil paintings by the artist to be hung in the White House, being only one of two artists displayed who was not American.

Museums with Works by Giorgio Morandi