I n the 1980s director, producer and screenwriter David Zucker blazed into movie theaters with a series of uproarious parody films including Airplane! and the Naked Gun film franchise. In the 2000s he went on to direct the spoof classics Scary Movie 3 and Scary Movie 4. It was this same passion for comedy that drove Zucker’s fascination with 19th-century folk hero Davy Crockett. Davy Crockett was "the Groucho Marx of his day,” according to Zucker, who has spent the past decades assembling a remarkable collection of Crockett-related ephemera. Now in the midst of writing a Naked Gun reboot, Zucker has decided to part with a few of his prized "King of the Wild Frontier" possessions. Below we caught up with Zucker about why Davy Crockett still intrigues us today.

How did you first become interested in Davy Crockett and why?
Like many people of my generation I became enthralled with Davy Crockett when I saw the Walt Disney Davy Crockett TV series, which aired from 1954 to 1955. The show set off what is known as the "Crockett craze." My brother and I got the Crockett suits with the plastic guns and so did of all our neighbors and we'd go out on the lawn and play Cowboys and Indians. Years later, I still had that fascination with his story.

From a childhood adoration, how did you segue into collecting his papers and related ephemera?
My friend Paul Hutton is a professor of history at the University of New Mexico and he introduced me to many people who shared this enthusiasm. I really fell into the Crockett scene. I owned a 20-acre ranch in Ojai, which is about an hour-and-a-half north of LA, and I started having these rendezvous where teachers, historians, rifle-makers and general Crockett fans would come from all over the country. We even had Fess Parker, who’d played Crockett in the Walt Disney series, come visit a few times. From there, I started collecting letters. The first letter I purchased was Crockett’s letter, written when he was a Congressman, to Hirom Favor, complaining about then-president Andrew Jackson.

"For my generation, Crockett was the iconoclast. We were the counterculture and Crockett caught our fancy, he was our historical rebel."

Do you have a favorite from your collection?
The highlight of the whole collection is the last surviving letter Crockett ever wrote, saying he was going to Texas the following morning, after having lost his Congressional seat. He writes “I want to explore the Texas well before I return.” This started Crockett off on his journey that ended badly of course.

"He wanted to get into the liquor business, just as a big Christian revival movement swept the frontier. Everybody got religion and banned alcohol. He had a scheme to chop down forest to make barrel staves — his plan was to ship everything in a flatboat down the Mississippi River from Memphis to New Orleans, but Crockett had no idea how to pilot a boat and the boat sank and he almost drowned."

Davy Crockett is now both a historical figure but also a legend. Why to you think his story and legacy is still so interesting?
He was the greatest marksman of his day, in that sense, the greatest athlete. He was also the greatest comedian of his day. He had a wit that he parlayed into great popularity and he was elected into Congress. He was greeted like Hawkeye from The Last of the Mohicans come to life – a megastar of the time. During his tenure in Congress he made many funny speeches and everyone invited him to this party or that.

But he was also a moral character and a renegade. When Andrew Jackson wanted to move all of the Native Americans west of the Mississippi, Crockett went against him, even though it went against his political career and his own constituents. He made a very dramatic speech in Congress trying to oppose The Indian Removal Act of 1830. Crockett paid the price for it too; Jackson, through a lot of dirty tricks, had Crockett's bid for reelection defeated, which is why Crockett wound up going to Texas and enmeshed in the Alamo.

For my generation, Crockett was the iconoclast. We were the counterculture and Crockett caught our fancy, he was our historical rebel.

The story is just epic in scope.
Yes, and Crockett had the great fortune to get killed at the Alamo! That’s what people said about Elvis when he died at age 42 – a publicist here in Hollywood said “Great career move!” Crockett became a martyr. Daniel Boone had even more adventures than Crockett, with a much more accomplished career, but he died of old age at 82 in Missouri.

Would you ever want to make a movie about Crockett?
For years I was working on a movie about him, but I found his life didn’t divide neatly into three acts. I have a script but I think now it would work better as a television movie. It’s too big of a story. The script became 250 pages and you only get 130 pages for a movie. Comedy is even shorter, 105 pages. The miniseries is still a real possibility though and of course I'd include scenes of him writing his letters. 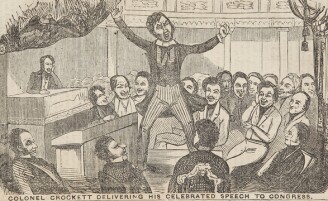 Would you say there were comedic elements to Crockett’s life?
Well, he failed at everything he did. He kept having to move further West because he was such a good shot and kept killing too many animals and depleting the livestock population. He wanted to get into the liquor business, just as a big Christian revival movement swept the frontier. Everybody got religion and banned alcohol. He had a scheme to chop down forest to make barrel staves – his plan was to ship everything in a flatboat down the Mississippi River from Memphis to New Orleans, but Crockett had no idea how to pilot a boat and the boat sank and he almost drowned. He started a grain mill and it was swept away in a flood. It was comical what befell him.

Have there been any comedic moments in your collecting career?
As a prank I once had a fake Crockett letter made up and I had my friend Bobby Weil pretend to be looking it over with a cup of coffee in hand. Everyone was saying, “You better put that coffee down you might spill it.” Another friend was enlisted to open the door behind him and bump him so Bobby would spill coffee all over the letter. I wasn’t there and the plan was I would come in and they would have to explain it to me. Weil then tried to wipe it off and it just all made it worse. A group of guys just drove off, they were so upset. That was a pretty great scene.

For a history buff or a book collector, why are these genuine Crockett materials appealing?
With his letters, it just so amazing to have something that Davy Crockett held in his actual hands, and the almanacks and the ephemera build around that. For many years these objects have lived together in my home as a whole collection that represents Crockett as the historical figure, but also the legend in stories and in Hollywood.

Do you think you would have liked Crockett if you met him?
If I could go back in time and meet him that would be a mind-blowing experience because certainly he would be so different than who I've imagined. There is some idea of how he looked from lithographs and paintings that survive, but how he moved and spoke and what he sounded like, I'm sure that would be unexpected. But I'm sure he would make me laugh — he was more or less the Groucho Marx of his day. In my mind, historically, he’s in a succession of wit coming after Benjamin Franklin, and following him, Mark Twain, Will Rogers, Groucho Marx, Woody Allen. These are people who went far above; they were just zany. I grew up wanting to come next in that line.