I n 1982 Dominique Bozo, the very first curator of the Picasso Museum in Paris, asked Diego Giacometti — brother of the famous sculptor Alberto Giacometti— to create and build the furniture and light fixtures for the Hôtel Salé. Giacometti accepted and committed himself fully to this monumental project which aimed at enhancing the museum experience.

Diego moved to Paris in 1927 to work with his brother Alberto in the latter's studio rue Hippolyte-Maindron, a street near Montparnasse. It was the start of an unprecedented creative duet. Shortly after his arrival, Diego met my grandfather, Pablo Picasso, and visited him in his atelier rue de La Boétie. Diego witnessed the intermittent relationship between his brother and the Spanish master. The museum's commission was a real challenge for the eighty-year-old artist. It required him to create furnishings that would bring together the classical building and the modern art, while engaging in a fruitful interchange with Picasso's work. With the help of Philippe Anthonioz, an emerging sculptor, Diego designed a unique ensemble comprising bronze benches, tables, chairs and various light fixtures. The bronze torch lamps and the three ethereal white resin chandeliers — the airiness of which is rendered by the plaster like grain — connect the powerful architectural forms of the Hôtel Salé to the paintings.

The geometrical lines and decorative details of the furniture, brought to life by the vibrancy of the venue, evoke antique sobriety as well as the animal and vegetable kingdoms. The minute owl on the lantern located on the first floor of the museum in the Jupiter room seems real and animated, clutching the bronze rod with its talons as if it were clinging to a branch. Diego Giacometti's ornamental and functional creations perfectly complement the museum's collections. Visitors perceive the talented craftsman and sculptor he was as well as his incredible sense of space and architecture.

DIEGO GIACOMETTI IN HIS STUDIO WORKING ON THE CHANDELIER FOR THE PICASSO MUSEUM. PHOTOGRAPH PASCAL HINOUS/ARCHITECTURAL DIGEST © CONDÉ NAST

Diego Giacometti worked in the shadow of his brother, as a model and practitioner for nearly forty years, until Alberto's death in 1966. An overwhelming number of Diego’s portraits5 demonstrates the siblings' extremely close relationship. While working at his brother's side and creating plaster moulds and patina for him, Diego developed exceptional dexterity. One cannot imagine the extent to which his incredible technique contributed to Alberto's success. Their collaboration on Jean Michel Frank's — an interior designer very much in fashion in Paris in the 1930s — commission is a telling example. Alberto imagined the accessories and ornamental objects and Diego made them. Michel Butor found the perfect words to describe the symbiotic relationship between the two men when he imagined Diego's soliloquy: "Being his brother, placing him first, accompanying and helping him, following his ideas, making them happen, to the extent that one can no longer perceive who initiated what..."

DIEGO GIACOMETTI'S STUDIO DURING PRODUCTION OF THE FURNITURE FOR THE PICASSO MUSEUM. © D.R COLLECTION PRIVÉE.

It was only in the early 1950s and encouraged by his brother that Diego started to express his own art. During the war while he was separated from Alberto for a few years, he began to fathom the potential of his creativity. He spent some time in Gianini's studio to further his sculpting skills — the caster gave him the nickname of "King of patina". He also attended live model classes at the Académie Ranson. In 1945 he went back to work for his brother, but also started accepting some orders for himself. Many collectors, dealers and artists understood the magnitude of his craftsmanship and decoded the mystery of the artist’s unusual method. Marguerite and Aimé Maeght where one of his first admirers. They had him create and build most of the interior and exterior designs of their apartments in Paris and their Provencal farmhouse: lamps, sconces, seats, tables, and various accessories, as well as furniture for Marguerite's room.

Pierre Matisse strongly suggested he sign his work, and demonstrated his faith in Diego's artistic potential by ordering several objects and pieces of furniture for his house in New York and his villa in Saint Jean Cap Ferrat. Even though his first productions — a five branch candelabra and two horse heads made for his brother's fiftieth birthday — are ornamental, Diego was mostly interested in furniture. In 1955 he imagined a chair with a square back, a model he used later in furnishing the Picasso museum. Elegant and functional, the chair illustrates the artist's distinctive style. His sleek "furnituresculptures" are decorated with pleasant fantasy details that are a figment of his imagination. Gentle animal-inspired poetry complements the slender lines of his designs. Mice, birds, dogs, owls, harpies, deer, foxes… All the animals of Noah’s arch found their way from the artist's talented hands onto his furniture. Legs, rails, and stretchers become branches and trunks on which the cheerful bestiary strolls along for the visitor's delight.

Diego was very much influenced by what he discovered during his visit to Cairo in 1927: the zoomorphic style of ancient Egyptian furniture and the bronze votive cats — which inspired his famous Chat maître d'hôtel. His interest in animals started a few years later, around 1935, while he was living in Stampa. He carefully studied 20 birds in the Jardin des plantes, a park in the heart of Paris, and when he wished to infuse some life into his brother’s motionless light fixtures he added a few feathered animals12. As time went by, he began making freestanding sculptures like this elegant ostrich he imagined for the giant-egg collector Jean-Paul Binet. The artistic milieu is still mesmerized by the whimsical world of this artisan and poet, whom they view as the heir of baroque and popular traditions. Through the years, Diego made a name for himself as his inventive genius matured and was recognized. The order for the Hôtel Salé distanced him from the work he did for art collectors and revealed his talent as a sculptor but also as a "builder".

According to Dominique Bozo, Diego fully mastered his art by conceiving ornamental and functional furnishings as sculptures. Diego accepted to be called an artist only at the end of his life. This title became official in 1986 when the Arts décoratif museum in Paris held the first retrospective exhibition of his work. Enlightened collectors such as Heinz Berggruen, Jean Cocteau, Gunther Sachs or Cecil Beaton had already sought out his work while he was alive. The value of his creations reached huge sums in the 1980s, thus elevating his furniture — which he absolutely wanted to be modest — to the rank of art. The sale organised by Sotheby's showcases an important number of commissioned pieces such as: La Promenade des amis, the frog-and-owl coffee table, the star-shaped fire dogs, the harpy pedestal table, a pair of owl sconces and the carcass table. Many collectors throughout the world will, no doubt, find interest in the beauty and purity of Diego's art which is imbued with his humanity and powerful creativity. 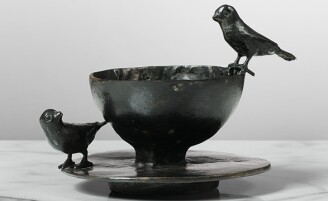