D rawn to the dramatic landscapes of Southern California, Canadian-born artist Henrietta Shore moved to Los Angeles in 1913, where she joined a small but influential group of Modernist painters. Fascinated by the vivid terrains of her new environment, Shore embarked on a series of depictions of the natural world, which would continue throughout her career. Exemplar of the artist's uncanny Modernist aesthetic is Irises circa 1930, a highlight of the upcoming American Art auction. Shown from a low foreground, the elegant, even austere, flowers tower against a dusky, otherworldly sky. Sinuous purple and white petals fold out from the vibrant yellow stamens at the flowers' centers, and deep green leaves frame the picture plane.

Exemplified by Irises, Shore’s singular vision – monumental flowers cloaked by enveloping leaves; gnarled tree trunks on vivid plains, white deer amid sloping hills – placed the artist among the most progressive painters of the early 20th century, and earned her comparisons to her contemporary Georgia O’Keeffe. Like O’Keeffe, Shore lived in New York before moving West, studying at the New York School of Art under William Merritt Chase and Robert Henri, and maintained strong ties to the art world there. In 1927 Shore made the acquaintance of famed photographer Edward Weston, who would become her lifelong friend. Weston, like many others, was captivated by the meditative and transcendent quality of her paintings, remarking, "Shore…realizes a fusion of her own ego with a deep universality... When she paints a flower she IS that flower, when she draws a rock she IS that rock ....Shore's work stimulates directly through the senses without intellectual interference.” 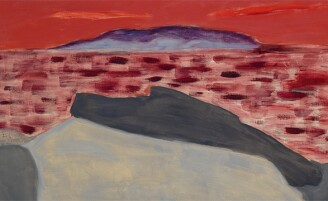