A dolfo Wildt paved the way to Modernist Sculpture. The Milanese sculptor’s technical virtuosity and Symbolism played a vital role in Spatialism and influenced key figures such as Lucio Fontana (who was taught by Wildt at the Brera Academy) and Fausto Melotti. Maschera dell’Idiota and L’anima e la Sua Veste, highlights of Sotheby’s 12 December 19th and 20th century Sculpture sale, were both made around the years of the First World War and are exemplary of Wildt’s many influences, as well as his own inner torment.

The intriguing marble L’anima e la sua Veste epitomises Wildt’s preoccupation with themes of religion, faith, and the duality of the human body and soul. While the precise meaning of the work is unknown, its title seems to allude to the concept of the soul being clothed within the body, explored also by Dante Alighieri’s Inferno in The Divine Comedy. The excavation of the eye sockets and the hollowed face convey a sense of the sculptor’s suffering that he experienced at the start of the 20th century, as seen in his work Santa Lucia (sold at Sotheby’s, 16 December 2015 for £485,000). Presented at the 1922 Venice Biennale, L’anima e la Sua Veste appears to be a fourth rediscovered version of the marble (with only one gesso and three marble versions recorded). The present marble testifies to Wildt’s personal struggle as well as the sculptor’s interest in corporeality.

The grotesquely compelling bronze Maschera dell’Idiota (Mask of an idiot) reveals Wildt’s fascination with theatrical masks, in particular with Japanese Okina Masks or Shikinsanban, which were in use during the 15th century. The present bronze is actually a modification of previous model, Spirito e Materia, which was commissioned by Wildt’s patron Franz Rose for the bathroom of his villa in Dolhau, Germany. The sculpture was therefore initially conceived as a decorative object, and was placed onto a blue mosaic vase, surmounted by a plaque with a ruby and diamond. What distinguishes Maschera dell’Idiota from Spirito e Materia is the almost brutal cutting of the jaw, creating an unsettling mood. Wildt’s friendship with his patron Franz Rose, with whom he stipulated a contract for eighteen years, was crucial to the sculptor’s production. With his protection, Wildt was able to experiment freely, exhibiting his works in major European cities such as Milan and Paris. After the death of Franz Rose, in 1912, Wildt found himself in a difficult situation for the first time in his life: having to confront the art market.

With works such as L’Anima e la Sua Veste and Maschera dell’Idiota, Wildt achieved international recognition from critics and collectors in the 20th century. He is still considered one of the major masters of European Modernism. The sale of these sculptural masterpieces provides a rare opportunity to acquire two of Wildt’s most personal and conceptual works. 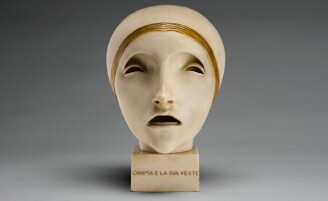