T his November the Modern & Post-War British Art (21/22 November) and Scottish Art (21 November) sales at Sotheby’s see two great artists whose careers focused on capturing the ordinary working people of Britain. Joan Eardley (1921-1963) and Laurence Stephen Lowry (1887-1976) spent their careers depicting the lives of the urban population in the poverty-stricken tenements of Glasgow, in Eardley’s case, and the industrial landscapes of Manchester in Lowry’s. Following the long tradition of Social Realism, their art examines the human condition of the working people they depict.

Nowadays Lowry’s work is celebrated for capturing the hum-drum bustle of the urban northwest of England. Lancashire Street and Viaduct, 1963 (Lot 13) like many of Lowry’s paintings, depicts factories, smoke and the famous ‘matchstick men’ pressed by poverty and the prevailing Salford wind. Lowry lived there from the age of 22 until he retired at 65, all the while painting the crowds of people coming to and fro from the factories and estates. He not only immortalised the characteristic buildings of industrial Manchester but portrayed the collective sense of loneliness and detachment whilst being in a crowd. Lowry’s approach to his medium is extremely painterly – layering, impasto and even scraping back the paint surface, as seen in the black rooves of Rush Hour. In this painting, the spindly dark legs of the workers show them to be just as transient as the smoke leaving the factory chimneys, disintegrating into the murky skies.

Joan Eardley’s career in part focused on depicting the urban population, but rather than paintings cityscapes dotted with anonymous people, her paintings depicted individuals with distinctive personalities. Eardley had a life-long association with Glasgow, having moved there during the Second World War and studied at the Glasgow School of Art. From 1949 she lived and worked in the Glasgow tenements producing portraits of the children in oils and pastels.

“They [the children] just let out all their life and energy… and I just watch them and I do try and think about them in painterly terms… all the bits of red and bits of colour and they wear each other’s clothes – never the same thing twice running… even that doesn’t matter… they are Glasgow” (F. Pearson, Joan Eardley, exh.cat, 2007, p.8).

Many of Eardley’s works, such as Girl with Green Scarf, separate line and colour to capture the restless and free-spirited characters of the children. Their beady-eyes and open expressions demonstrate Eardley’s familiarity with the children she painted. Eardley also worked expressively with oil paint, The Table depicts the cluttered interior of a Glasgow tenement apartment and the subject’s repose in loose brushwork, highlighted periodically with vivid orange and yellow.

Similar to Lowry, Eardley sought to capture the essence of ordinary people on a canvas, but chose to focus on the psychology of the individual rather than a crowd. Both artists show a close affiliation with the people they depict; a loyalty to the ordinary people of Manchester and Glasgow. By the 1960s many of the buildings in Lowry’s work had been demolished or redeveloped, and by the mid-1960s, the Townhead tenements that Eardley depicted had also disappeared. As a result, the spirits of Manchester and Glasgow as these artists knew them are pertinently instilled and immortalised in their works.

Lowry’s work has found a special place in the national consciousness and has become a popular reference point for the social understanding of industrial Britain. His paintings and drawings have enjoyed huge commercial success and a number of important exhibitions including a major retrospective at the Tate in 2013 have reinforced his national importance.

At the time of her death in 1963, Eardley was just becoming successful. She had been too ill to attend her first major solo exhibition in London for which she received public recognition, and in July 1963 had become a Royal Scottish Academician.

Last year the Scottish National Gallery of Modern Art held an exhibition: Joan Eardley: A Sense of Placewhich brought her work to a larger audience and served to highlight her importance within the art history of 20th century Britain. With each publication and exhibition of her work, her status grows, according Eardley with the wider recognition she deserves. 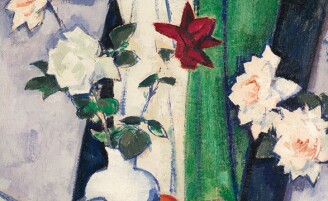