C elebrated as part of our 21 and 22 November sales of Modern & Post-War British Art, William Turnbull is rightly recognised as one of the most significant British artists of the post-war period. Throughout his career his sculpture was concerned with the idea of archetypes — images that speak about the human condition, beyond time and without geographical boundary, both describing our presence in the world but also acting as intermediaries between us and the divine.

Having left the Slade School of Art to live in Paris — where revered masters such as Giacometti could still be found, and approached, in the cafés of the Left Bank — Turnbull returned to London in the early 1950s. His breakthrough came in 1952 when Herbert Read selected him to represent Britain at the Venice Biennale, along with Robert Adams, Kenneth Armitage, Reg Butler, Lynn Chadwick, Geoffrey Clarke, Bernard Meadows and Eduardo Paolozzi, in an exhibition entitled New Aspects of British Sculpture. The show was an instant, international success, attracting interest from both major institutions and private collectors.

Turnbull’s influence as a sculptor can be measured in the number of his works that can be found in major museum collections throughout the world, but perhaps more interestingly in his regular appearances in David Hockney’s iconic ‘60s paintings of California art collectors, such as Beverley Hills Housewife (1966-7, Private Collection) and American Collectors (Fred and Marcia Weisman), (1968, Art Institute of Chicago).

While best known for his three dimensional work, for as long as he was a sculptor Turnbull was a painter too.

The large abstracts he made in the late 1950s and early 1960s being some of the most daring and beautiful works painted in Britain, at a time when a number of our artists – Patrick Heron, Roger Hilton, Peter Lanyon, to name a few – were also making work to rival much of what was going on in Europe and, in particular, America.

A selection of William Turnbull's works are available in the coming Modern & Post-War British Art sale on 21 November 2017, and at the current S|2 exhibition, which runs until 17 November. 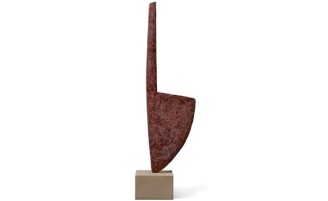