As the Hong Kong Spring Auctions continue this week, we take a minute to recognize some of the results so far that have already made the series a remarkable success.

The 2020 Spring Sales series kicked of with a three-day wine auction, including two landmark single-owner wine sales, achieving total sales of HK$177 million (US$23 million), far exceeding the high estimate with more than 2,600 lots sold. These results mark the third highest ever for a wine sales series in Asia. The Summit, A Complete Cellar brought in HK$123 million and Magnificent Bordeaux from the Cellar of Sir Dickson Poon achieved HK$19 million (US$2.5million), both exceeding expectations. The top lot was a Methuselah sized (six-liter) bottle of Romanée Conti 1999 Domaine de la Romanée-Conti, which fetched HK$2.1 million.

Exceptional results were achieved for the two sales on Wednesday evening, for Modern and Contemporary Southeast Asian Art and the Modern Art (8 July, Hong Kong), with many lots exceeding their sale estimates.

Over the course of 35 lots, the Modern Art evening auction outpaced expectations and broke multiple records, bringing in a total of HK$826.2 million (US$107 million), with a 97.1 percent sell-through rate by lot. Historically is the second highest total achieved in Modern Art at Sotheby's, with all but one lot finding buyers. Leading the first marquee evening sale this year was Sanyu’s Quatre nus, a masterwork from the artist’s creative peak. Bidding was heated with four bidders vying for the top lot, and after a ten minute battle went under the hammer for HK$258.3 million (US$33.3 million).

Les éléments confédérés, the largest Chu Teh-Chun oil painting in private hands and the only pentaptych by the artist, fetched a soaring price of HK$113.7 million (US$14.7 million). This marks a milestone as it set a new record high for the artist, making it the first work by Chu to surpass the HK$100 million.

Seven works by Zao Wou-Ki were 100 percent sold, all together realizing HK$318.5 million (US$41 million) total, led by Zao's masterpieces of his "Hurricane Period" 20.03.60 And 19.11.59. Among the other new benchmarks reached in the sale were works by Pang Jiun, Guan Zilan, and Chen Ting-Shih, topping all previous records for the respective artists.

The 18-lot Modern and Contemporary Southeast Asian Art results outpaced expectations, bringing in an aggregate of HKD$41.7 million. The auction saw plenty of competition between phone and online bidders, especially for works by women artists such as Ay Tjoe Christine and Jane Lee. Femme Nue (Nude) by Georgette Chen, the first nude composition by the celebrated artist to appear on the international market, was sold at HK$1.6 million (US$210,000) soaring far above the high projection of HK$300,000 (US$39,000). Works by Mai Trung Thu and Pham Hau earned impressive results, both of which exceeded predictions threefold, as well as the paintings by Adrien Jean Le Mayeur de Merprès.

See highlights from Hong Kong's upcoming auctions this week, with much more to come. 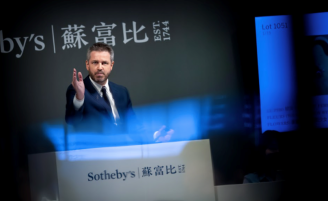