An extraordinarily comprehensive groups of works centred on Charles Darwin feature in the English Literature, History, Children’s Books and Illustrations sale in London on 11 July.

The Garrett Herman Collection, which is one of the largest private collections of material on the naturalist, includes an admission ticket to Darwin’s funeral, a ballad lampooning his Theory of Evolution and a whimsical miniature ‘monkey’ microscope.

The collection also encompasses several of Darwin’s major works including a rare first edition of On the Origin of Species, as well as first editions of various other publications in Russian, Spanish, German, Swedish, Yiddish, and Danish.

To this is added a wealth of supporting material of a more personal nature, such as several letters (including one to surveyor and friend Edward Cresy, asking for advice on the education of Darwin’s son Leonard), and a book containing a signed money order for John Cattell, a local nurseryman from whom Darwin bought plants for many years.

CHARLES DARWIN. ON THE ORIGIN OF SPECIES BY MEANS OF NATURAL SELECTION, OR THE PRESERVATION OF FAVOURED RACES IN THE STRUGGLE FOR LIFE. JOHN MURRAY, 1859. ESTIMATE £50,000-70,000.

Other highlights include a rare photographic portrait of Darwin by legendary British photographer Julia Margaret Cameron. Cameron took a series of pictures of Darwin when he and his family rented the photographer’s lodge in Freshwater on the Isle of Wight in the summer of 1868, where they stayed for six weeks. During this time, Darwin’s family became very attached to Cameron, and were visited by several of her friends (including poets Tennyson and Longfellow). Darwin himself believed that Cameron’s were the best photographs that had been taken of him.

Also of particular interest is a copy of Darwin’s most famous publication, On the Origin of Species, from the library of Charles Kingsley, a priest of the Church of England who is perhaps best known for his children’s book The Water-Babies. Before publication, Darwin sent copies of On the Origin of Species to a number of selected recipients, including his friend Kingsley. Despite his religious background, Kingsley had an overwhelmingly positive response to the book, writing to Darwin: “All I have seen of it awes me; both with the heap of facts and the prestige of your name, and also with the clear intuition, that if you be right, I must give up much that I have believed and written…”

In the words of collector Garrett Herman, “[Darwin] saw seemingly mundane occurrences or patterns in nature in a whole different light. Through the wealth of information and data he gathered and organized, he created a platform from which to look beyond the apparent” (Grolier, Darwin, pp 6-7).

The English Literature, History, Children’s Books and Illustrations, including The Garrett Herman Collection: The Age of Darwin sale is in London on 11 July. 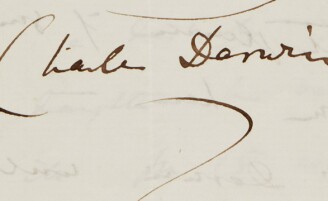