The Unseen Side of Frank Auerbach

A s one of Britain’s most celebrated living artists, Frank Auerbach is recognised the world over for his thickly impastoed portraits and North-London landscapes, but Sotheby’s Made In Britain/Online auction showcases the private and previously unseen side of his art, in a series of intimate drawings gifted to one of his most famous sitters, Joan Yardley Mills.

Auerbach first met Joan Yardley Mills (JYM) at Sidcup College of Art in 1957. She was an artist herself and became Auerbach’s personal model for over thirty years. During this time JYM would pose for Auerbach every Wednesday and Sunday without fail, sitting for him for up to five hours at a time. This practice continued until 1997 when JYM was in her 80th year.

These works which Auerbach sketched on the front of envelopes he sent to JYM are testament to the close relationship that developed between the artist and model during their thirty years working together. Many were given to JYM to commemorate special occasions: birthdays and Christmases, or when a big cricket match was taking place in London.

JYM describes her time with Auerbach after she had retired from modelling for him.

“We had a wonderful relationship because I thought the world of him and he was very fond of me. There was no sort of romance but we were very close. Real friends. Sundays now I’m always miserable.”

As well as representing the personal relationship between Auerbach and JYM, the sketches also show the artist’s work in a spontaneous, humorous light. They are lively and personal, symbolic of the close relationship between an artist and the model who had spent thousands of hours posing in difficult conditions for him in his studio. 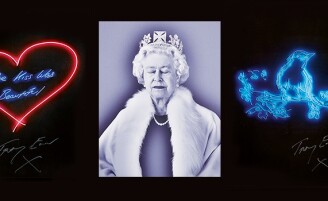