The Renand-Chapet Family's Century of Collecting

By Sotheby's
On 18 October in Paris, Sotheby’s will offer rare masterworks acquired over a century by the important French collectors, the Renand-Chapet Family.

G eorges Renand (1879-1968) compiled one of the most important collections of artworks of his time. When a part of it was dispersed at the auction house Drouot-Montaigne between 1987 and 1988, over four memorable sessions, the public was able to discover a series of masterpieces such as The Piebald Horse by Paulus Potter, today kept at The Getty Museum, Paysanne près de l’âtre de Van Gogh and A View of the Seine by Seurat, now in the collection of the Musée d’Orsay and the Metropolitan Museum in New York, without counting other beautiful pieces by Ingres, Corot, Seurat, Cézanne, Matisse or Modigliani (La Belle Romaine and La Femme à la cravate noire among others).

A learned and passionate collector, Georges Renand showed a remarkable eclecticism in his choice of purchases. The paintings and art objects that decorated his town house on the Quai de Béthune on the Ile Saint-Louis or his villa near Paris gave an overview of art in one glance from different centuries, from Europe and Asia. He began his collection with a drawing by Bonnard. His second purchase was a primitive artwork and his frequent visits to auction houses or galleries meant he brought together a surprisingly varied group of works. Despite this, the collection retains a certain homogeneity, in a reflection of an original humanist vision of the course of art through history.

He also purchased works from private collectors, including those introduced to him by his friend Jean Walter, an architect and husband to Paul Guillaume’s widow. During his numerous encounters, he occasionally exchanged paintings, in order to free a place on the wall for a new impassioned acquisition. He thus gave away a Cézanne for Watteau’s Bal Champêtre, exchanged Seurat’s Le Liseur for a work by Ter Borch, sacrificed Les Cyprès by Van Gogh for a Gauguin or swapped a Corneille de Lyon for a drawing by Daumier and another by Ingres.

His daughter Jeannine (1918-2017) was always attentive to her father’s occupations and when she married Edouard Chapet, himself a great art lover, the couple followed a double approach. They endeavoured on the one hand to buy pieces from their father’s collection, but also to compile their own. The whole collection reunited demonstrates the Chapet’s interest in continuing the game of correspondences between eras, styles and subjects.

At the core of the collection presented today can be found a Greek marble head, and a Baoulé mask. Alongside these pieces, the vigour of two horses by Géricault seems to reply to the quivering of Dürer’s Grand Cheval whilst further along, the dome of Saint Paul’s cathedral sits imperturbable in Corot’s soft light. And always the taste for audacity and thoughtfulness that inhabited Georges Renand, two components at work in the painting by Cézanne, Abricots et cerises sur une assiette.

A more personal part of the collection finds its origins in Jeannine’s ardent temperament - she was an outstanding ski champion and fervent traveller – as well as in the friendships this sociable and endearing couple made with the artists of their time which fed into and enriched the collection. Olivier Debré, Poliakoff and Estève thus joined the heritage of the past and accompanied Edouard and Jeannine’s discovery of abstract art. Sotheby’s and Pierre Bergé & Associés today have the pleasure and the honour to reveal the result of these two passions combined over a century. 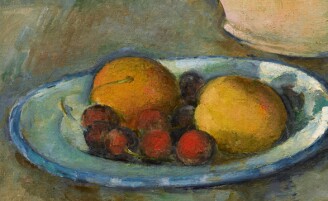