The Rare God Figure that ‘Promoted the Growth of Tobacco’

African & Oceanic Art Researcher Amy Bolton introduces one of the highlights of the upcoming Aboriginal Art auction in London, a rare Tobacco God figure from the Torres Strait Islands, previously sold at Sotheby’s 50 years ago and originally used to protect and promote the growth of tobacco.

In 1888, recently ordained Missionary Reverend Henry Moore Dauncey set sail from his hometown of Walsall in England, for Papua New Guinea, embarking on a missionary service that would span more than 40 years. His mission was directed by the London Missionary Society, a privately funded Protestant organisation formed in England in 1795, with the aim of spreading the knowledge of Christ and the teachings of the protestant religion. Following his arrival in Port Moresby he moved to the town of Delena and was soon given a seat on the Legislative Council which formed part of Papua’s governmental scheme.

On 9 September 1888 Dauncey met Alfred C. Haddon, to this day one of the most important anthropologists to have documented the region. He showed him “many objects of great interest”, perhaps inspiring the young missionary to collect these ethnographic objects himself, which he did, sending pieces back to the UK on departing ships as and when he could.

As well as buying these “curios”, Dauncey was also gifted with various objects. In his diary, he recounts a visit to a village where “we were met by Koapena, the most powerful chief in New Guinea, […] he put his arms around me, gently pressed me to his breast, and then rubbed his nose against mine. This he repeated when we left, at the same time presenting me with his lime gourd and receiving from me a Wednesbury-made hatchet as a return present.”

One of the four most significant pieces that Dauncey acquired during his stay was an incredibly rare Tobacco God figure from the Torres Strait Islands, one of the principal highlights from the upcoming auction Aboriginal Art (14 March, London). It is one of only a handful of such charms known today and would have originally been used in traditional ritual and farming practices designed to protect and promote the growth of the valuable tobacco crop.

Termed a Sokop Madub by the indigenous people (Sokop meaning tobacco), these charms were carved from a piece of wood to represent a human figure, painted and would then be placed near or in a tobacco garden. Tobacco was a treasured substance to the islands; it was sometimes even used as currency within New Guinea.

This figure is significant not only for its traditional use within the fields of tobacco; it also demonstrates the remarkable skill of the sculptors within the Torres Straits to create characteristic contours, meaningful expression and pleasing form, seamlessly uniting function and beauty.

Dauncey went on to write a book called Papuan Pictures (1913), detailing his life and work in Papua and illustrated with his own photographs. Back in Walsall, the Walsall Library Committee in 1891 had inspected a collection of pieces at Dauncey’s house which he had offered to lend for an exhibition. This exhibition: The First Loan Exhibition of Pictures, Sculpture, Curios etc., was held the following year and included a great number of objects from the collection.

Appreciation for this foreign ethnography was increasing as explorers, missionaries and anthropologists continued to reveal the secrets of these far-flung lands and cultures. In 1914, Dauncey’s sister brought together a collection of these objects in a garden fete, which attracted much attention, and was written about in the local paper, a demonstration of the new curiosity in cultures beyond Europe.

Dauncey returned to the UK from Papua New Guinea in 1928 due to poor health and, when he died in 1932, part of his collection was bequeathed to the Walsall Public Library. In 1967, the library made the decision to sell the objects from this collection to raise money for the museum. Four pieces were sold on 26 June 1967 at Sotheby’s London, including the Tobacco God figure offered here and a magnificent Torres Strait Island Drum now in the collection of the Barbier-Mueller Museum in Geneva.

The remarkable provenance of this charm, reaching back 130 years, only strengthens its exceptional history and makes it all the more important and unique. 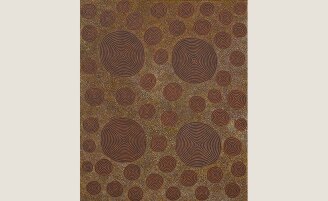