By Tim Klingender
After 57 years, Seagull (Ngurula), a masterwork on bark by Mawalan Marika (1908-1967) is returning to New York, where it was last exhibited in 1963, and is a highlight of the Aboriginal Art auction on 13 December.

I n 1962, French/Czech artist and author, Karel Kupka, published Un Art à l’État Brut (‘The Dawn of Art’) his first book on the painting and sculpture of the Australian Aborigines, with a forward by André Breton. In it he refers to Mawalan Marika as the ‘best-known painter’ of North East Arnhem Land, and writes, “Furthermore Mawalan. whose fame has been given official sanction by the various Australian State galleries that hang his work, shows a highly personal, pictorial manner…”

Seagull, painted in the same year as Kupka’s publication, travelled to New York for the landmark exhibition Australian Aboriginal Art, at the Qantas Galleries in March and April 1963, and after 57 years, returns for inclusion in Sotheby’s inaugural New York sale of Aboriginal Art.

Mawalan Marika was a highly influential ceremonial leader, political activist and artist. He was leader of the Rirratjingu clan when the fist missionaries arrived, and their mission was established on his Rirratjingu clan land in 1936. This rare and exceptional bark painting depicts the Seagull Mourning Ceremony. Ceremonial rituals for various reasons bring people together. Elements of ritual for the Yolngu of North-east Arnhem Land cannot take place without the presence and participation of associate clan groups - from either the mother’s or the mother's mother's side... This painting can refer to the association the artist's clan (the Rirratjingu based at Yirrkala) has with its grandmother's clans (the Djambarrpuyngu and Mardamarday clans).

Ceremony performed by these clans may involve a wooden effigy of the seagull totem Ngurula connected to (in this case) three lengths of sacred string representing the three clans and their connection to each other. The ancestral flight path of Ngurula connects three homeland estates belonging to these clans – Yirrkala Barrdarbarrday and Croker Island. Each of these places can be seen in the context of Ngurula as a nesting place called Gamarrwa. Participants of ceremony are depicted dancing to the accompaniment of yidaki (didjeridu) and bilma (clap sticks) the original ancestors turning into seagulls themselves – upper half of painting. Today Ngurula being a physical manifestation of the ancestral soles of these three connecting clans 1962 represented the apex of the artist’s painting career, a year when he painted large scale bark paintings for Dr Stuart Stuart Scougall and Tony Tuckson (the Director of the Art Gallery of New South Wales), and “played a leading role in producing painted panels on Yolngu religious themes, which were installed in the Yirrkala Church, contributing to the regional reconciliation of two very different cultures – the English and the Yolngu. In 1963, Marika was one of the signatories of the famous Yirrkala Bark Petitions presented to Parliament to protest the Commonwealth’s granting of mining rights. The historic petitions were not only the first traditional documents prepared by Indigenous Australians that were formally recognized by the Australian Parliament, but they were also the first recognized native title claim.” 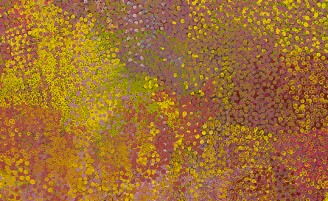 Another large-scale masterwork by the artist’s brother Mathaman Marika, entitled Marwuya, 1959, was sold at Sotheby’s New York in 1998, achieving a world record price for a bark painting of US$71,250.

The current world record price for an Aboriginal bark painting at auction was set at Sotheby’s in London in 2015, when Jack Karadada’s Namarari – The First One, achieved £100,000.