The Power of Women in Old Master Sculpture

S ince antiquity, sculpture has often been regarded as the prime medium for representing the heroic male. It is refreshing, therefore, that two examples of sculpture representing strong female subjects are being offered in Sotheby’s Old Master Sculpture & Works of Art sale on 3 July.

A new artistic interest in heroic women emerged during the Renaissance, when humanist environments imbued biblical and mythological legends with contemporary relevance. Early 16th-century painters in northern Europe, such as the Cranach family, depicted ancient goddesses and Old Testament heroines in Renaissance garb, gazing mysteriously and powerfully at the viewer.

Such depictions formed part of the ‘Power of Women’ phenomenon in Northern Renaissance art, a subversive topos surrounding complex ideas about gender roles and female agency. Women in this context could be seen as both virtuous – for example, killing for the greater good – and dangerous – assuming power over men in a patriarchal society.

A biblical heroine who was frequently depicted in Renaissance art is Judith, whose story is related in the deuterocanonical Book of Judith. One night, while the Assyrian armies were storming the walls of the Israelite town Bethulia, a wise Israelite widow named Judith bravely approached the enemy general Holofernes. Charming him with her beauty and plying him with wine, Judith waited until the general was sound asleep, and then cut off his head.

Lot 70, a pair of boxwood statuettes representing Judith and her maid, is a rare example of the subject in sculpture. Dating to the later 16th century, the pair shows the heroine in luxurious contemporary clothes, about to place the severed head of Holofernes in her servant’s sack. A conspirator in Judith’s murderous act, the maid gazes furtively at Judith, who, with a knowing smile, faces away from the gruelling scene. Her delicate features and ornate costume highlight her feminine sexuality, with which she beguiled her adversary.

Carved in the Southern Netherlands, these small-scale figures were probably made for a private collector, who may have placed them in his study as a subject of intellectual debate as well as artistic accomplishment. Through handling and turning of the figures, their subtle facial expressions and physical interaction become open to varying interpretations.

With its focus on theatricality, sculpture in the Baroque age lent itself particularly well to dramatic subjects, and these included powerful women. Lot 90 represents a pair of marble heroines from Roman antiquity, each captured in the tragic act of taking her own life. Identified as Lucretia and Pompeia Paulina, the figures are attributed to Giovanni Battista Foggini (1652-1725), one of the foremost sculptors in Florence around 1700, and court sculptor to the ruling Medici family.

Like Judith, the subject of Lucretia has been popular with artists since the Renaissance. Hers, too, is a story of female agency within a larger political context. Related in Roman historical legend, the death of Lucretia was regarded as a catalyst for the fall of the Roman monarchy and subsequent establishment of the Republic around 509 BC. The wife of Lucius Tarquinius Collatinus, governor of Collatia, Lucretia was raped by the Etruscan Sextus Tarquinius, a son of the king of Rome. After Tarquin’s assault, Lucretia beseeched her father and husband for revenge. While they debated their response, Lucretia killed herself by plunging a dagger in her heart. Her noble self-sacrifice inspired the Romans with admiration and compassion to rise up and overthrow the monarchy.

Foggini shows Lucretia in dramatic action, as if her decision to take her life after her confession is sudden and spontaneous. As she turns her head, it appears as if her final cry is for justice and revenge.

Pompeia Paulina has firmer basis in historical fact. She lived during the reign of Nero, and her heroism in the face of tragic circumstances provided a high moral lesson of marital fidelity. Her husband, the famous stoic philosopher, Seneca the Younger, was implicated in the Pisonian conspiracy to kill the Emperor. In 65 AD Nero demanded that Seneca commit suicide for his part in the plot. The principled Pompeia Paulina considered it her duty to share the fate of her husband and attempted to commit suicide by cutting her veins. However, Nero ordered that she should be saved and her servants are credited with using a tourniquet to stop the flow of blood and thus saving her life.

Here Foggini focuses on the moment Pompeia Paulina cuts her veins and allows her blood to flow into an ornate urn at her side. Paulina’s distraught features express her resolute action to honour her husband’s noble stoicism in accepting the fatal judgement of the Emperor.

A striking pairing of noble and moral Roman heroines, Lucretia and Pompeia Paulina must have been commissioned from Foggini with a specific instructive intention.

Whether as defenders of their people, catalysts of political change, or committed political dissidents, the women represented in these two pairs of statuary are powerful agents of their fate. 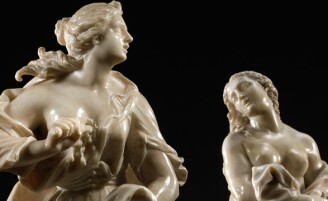