The Iconic, Timeless Elegance of the Hermès Scarf

By Halina Loft
Sotheby's Handbags and Accessories Online offers a collection of must-have Hermès scarves, each with its own remarkable design. Bidding is open through 2 December, 2:00 PM EDT.

T he scarf is quite possibly the most simple accessory: just a square (or rectangle) swatch of fabric, long enough to circle the neck, but not so long as to be considered a blanket. But simplicity can mean brilliance, especially when considering scarves from French luxury brand Hermès.

The Height of Parisian Fashion

Hermès first began producing scarves in 1937, a century after the company established its first harness workshop in Paris. Robert Dumas, a member of the Hermès family, created the design for the first scarf using a woodblock; the elaborate, colorful pattern quickly drew attention from women in Paris's high society and before long, the Hermès scarf was the must-have fashion accessory.

Made from imported Chinese silk, the first carrés ("square scarves") were twice as strong as any other silk scarf on the market at the time, and by far the most versatile. Not only could the wearer fashion it around her neck or tie it to her saddle, she could use it for more demanding tasks. Princess Grace Kelly of Monoco, for example, used her Hermès scarf as a chic sling when she injured her arm in 1957.

Today, Hermès sources its silk from its own silkworm plantation in southern Brazil – and the scarves remain impressively strong, thanks to 450,000 meters of silk.

A Wearable Work of Art

Since Dumas's first design in 1937, Hermès has employed a number of renowned artists to create the scarves featured in each season. Once an artist conceives a design, it's carefully engraved into the screen for printing (a process that takes approximately 750 hours). What results is a wearable work of art that tells the story of its artisans, and carries the legacy of a brand.

While Hermès works with many artists, only one is American: Kermit Oliver. Since the 1980s, Oliver has designed a number of scarves for the brand, including the Hermès "Madison Avenue" Silk Twill Scarf 90cm. Featured in Sotheby's Handbags and Accessories Online auction, the scarf was issued in 2000 to mark the 10th anniversary of the Hermès boutique on Madison Avenue and reissued in 2010.

Fit for a Queen (or a First Lady)

The Queen first began wearing the scarf in the 1940s – it was, and still is, an essential tool for securing her hair during sporting events, particularly when horses are involved. Jackie Kennedy also opted to wear her Hermès scarves during outdoor excursions, especially during the summer months when trips to the ocean called for stylish protection from the wind.

Today, more than 80 years since the Hermès scarf made waves in Paris, it remains a quintessential accessory for men and women alike. And if this season's trends are any indication, we can expect the formidable legacy to continue growing and evolving for years to come.

Bid on these and other luxury goods from Hermès, Chanel and Louis Vuitton in Sotheby's Handbags and Accessories Online auction, open through 2 December. 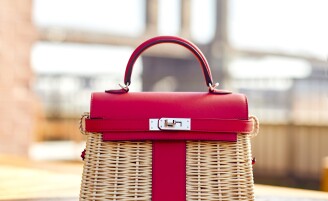