The Golden Age of the French Riviera

By Sotheby's
Sotheby's sale, Vue sur la Riviera – La Villa d’un Collectionneur in Paris on 25 June, brings to auction the treasures collected by the resident family in Monaco through the region's most culturally rich and expressive era. 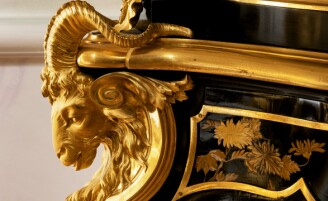 I n conversation with Sotheby’s Mark Armstrong, the émigré countess Schouvalova looked into the distance and remembered wistfully:

”Ah, La Riviera. They came down from Saint Petersburg on the long train journey after Russian Christmas … at last… The Riviera; Cannes, Nice, Beaulieu, Monaco, San Remo. On arrival fur coats were excitedly pushed out of the windows to the waiting babushka sent ahead to open the villas and houses where they were to stay throughout the spring until after Easter”.

Villa X, which dominates the Sainte Devote valley, was one of those villas. Each year, at the small baroque chapel from which the valley takes its name, a boat is burnt to honour the patron Saint of the Principality of Monaco. Perhaps all those that counted in the heterogeneous world that became Monte Carlo passed through the villa’s doors: Davidoffs, Troubetskoys, Bonapartes, Russian Grand Dukes, and Grimaldis in a cosmopolitan whirlwind of pleasure, art and music.

Monaco in the third quarter of the 19th century was a thriving, ever-growing metropolis, its redevelopment from the 1860s was overseen by its prince, His Serene Highness Prince Charles III, and the brilliant entrepreneur Francois Blanc greatly aided the process with the opening of a casino. At the time, it was just below the Villa X. The casino later moved to the plateau Mont Saint Charles which became “Monte Carlo”.

With the building of sumptuous grand hotels such as the Hotel de Paris, charming villas, pleasure gardens, thermal baths and a glorious opera house built in six months by Joseph Garnier, Monaco offered all that the elite required. To these delights European Royalty, aristocrats and rich American plutocrats flocked to winter in the warm climate of the Riviera and to visit “Monte”.

The Riviera. Nice, with its Russian cathedral, and stately palaces, Cannes and the three Caps all attracted a cosmopolitan and cultivated winter world never to be seen again until its re-invention as a summer place by Europhile Americans like the Murphys, and the Scott Fitzgeralds.

In 1911 Diaghilev and the Ballet Russes settled in Monaco. Artists such as Picasso, composers like Stravinsky, and many other musicians, painters, and writers added to the aura of a Proustian helter skelter of creation and charmed living. Nijinsky and Karsavina danced; Melba and Chaliapin sang, Bernhardt performed, Cocteau charmed, Apollinaire went to school and Stefan Schwieg wrote in this heady pre and post First World War atmosphere.

The elegant connoisseur owners of the Villa X, following in the tradition of previous aristocratic owners of the property, decided to perpetuate the ambiance of this golden age when they refurbished and rebuilt what was to become their family home. In an atmosphere of quiet elegance they sponsored musical evenings, talks about art and entertained royally. Their credo; to recreate the mood and feel of a grand Belle Époque villa with only the best of what the exciting 19th century industrial age could produce in the way of furnishings and the decorative arts.

They scoured the salerooms and catalogues, met antique dealers and collectors, searching for the very best of paintings and furniture made by ébénistes such as Linke, Dasson, Zweiner and Sormani. They sought out vitrines full of splendid ceramics with imperial provenance and sumptuous Fabergé silver and added Imperial silver gilt services that Catherine the Great might once have dined upon.

They created a home but also an ambiance that the likes of the Francois Blancs, the Rochefoucaulds, Sherbatoff’s, the Bessobrasova’s , and the later émigrés such as Kschessinska and the European Aristocracy would feel at home in. But, now that their children are grown up, they have decided to move on and let others share the fruits of their collection, which is resplendent with their love of these astoundingly energetic moments in the history of the decorative arts.