By Martin Dean
Where Were You At Night – an exhibition of contemporary art at S|2 London – takes its name from a collection of short stories by Clarice Lispector. Like the book, the exhibition explores themes of multiple narratives and perspectives, and the intertwining of emotions and expression.

E mphasising the theme of intertwining, the works on show at S|2 London's exhibition Where Were You At Night suggest the hand-crafted, the tactile, and the woven, the alternation of space and substance to create fabric. This naturally includes textile works and, in several pieces the exhibition references the evolution of textile art through the 20th and 21st centuries.

Jagoda Buić, Olga de Amaral and Françoise Grossen are three artists who played an important role in the establishment of fibre art as a medium of equivalent stature to other fine art disciplines. As the artists working in this medium were predominantly female, this process of establishment took on a revolutionary aspect, with the elevation of the medium – away from 'handicraft' and toward fine art – evoking the progress made by female artists themselves in a largely male-dominated art world.

All three artists appeared in one of the most important events in the history of textile art: the 1969 Wall Hangings exhibition at New York’s Museum of Modern Art. All three also feature in S|2’s Where Were You At Night, drawing a direct line from Wall Hangings to the modern day and a renewed contemporary interest in fibre art. A major retrospective exhibition of fellow fibre artist Anni Albers — a student at the Bauhaus art school who focused on textiles and weaving whose work also appeared in Wall Hangings — took place at the Tate Modern in October 2018.

Wall Hangings investigated how it was possible for art to move beyond depiction and the image, and instead go deeper into the idiosyncrasies of the medium itself: the nature of its construction, the metaphorical implications in the interrelationship of its component parts, threads, layers, spaces, textures and functions. Perhaps most importantly, the nature of the materials and the crafts involved located the works in a cultural history of human craft, folkloric references and diverse geographic regions. A common theme was the avoidance of modern technology, instead focusing on the hand-made. The artists also showed the diversity within the medium and how it offered a challenge to traditional visual art forms such as sculpture. Françoise Grossen’s suspended ropes, for example, explored the idea that the knotted medium could one day exist unbound from the hierarchies of sculptural practice.

Where Were You At Night includes the Jagoda Buić work, l’Ange Chasse (Fallen Angel), which originally appeared in Wall Hangings, along with three works by Françoise Grossen and three by Olga de Amaral. The works will be exhibited alongside textile works by other artists including Tonico Lemos Auad, as well as works by a selection of other artists using wood, ceramic, metals, fibres and found materials. It’s open until 19 September. 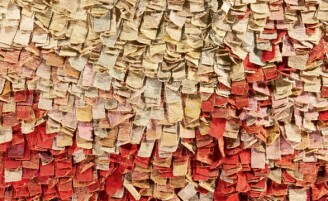