By Alexander Grogan
Sculpture from the Collection of George Terasaki will be on exhibition in New York from 16–18 November before coming to auction on 19 November.

W hen asked to trace their collecting journey to its beginning, many of the greatest collectors of American Indian Art recall the moment they fell in love and cite an encounter with one man: George Terasaki.

His name is legendary in the field, and synonymous with sculptures and objects of great power and pedigree. The passion of Terasaki’s life was the discovery and elevation of artistic masterpieces from the indigenous cultures of North America, and many artworks which passed through his hands are now in major institutions and distinguished private collections. With a rigorous intellect and as an artist himself, Terasaki had a deep knowledge of the cultures he observed, together with a sensitive eye for artistic quality. The relentless pursuit of beautiful objects brought him face-to-face with the artists of past eras.

Terasaki was born in Los Angeles to a Japanese family in 1931. His early life met with an ugly chapter in American history, as he and his family were forced into the Gila River Relocation Camp in Arizona as part of the US government’s internment of Japanese-Americans during World War II. The aesthetics of the Arizona landscape and the cultures of the American Southwest would follow him throughout his life. George and his siblings transcended this early beginning; his older brother Paul went on to become a distinguished scientist and was a key pioneer in the field of organ transplants, and would become a generous benefactor of UCLA, his alma mater, where the Terasaki Life Sciences Building now bears his name. George Terasaki studied art, first at the Art Institute of Chicago and later at Cooper Union in New York. There he met the painter Merton D. Simpson, who would later go on to become one of the greatest promoters of classical African Art as the preeminent dealer in New York. The two men were both painters in the abstract styles of the day and mixed in the vibrant avant-garde culture of New York City, bringing their own rich perspectives and sensibilities: Simpson as an African-American and Terasaki of Japanese descent. Beginning with small objects, Terasaki began to acquire early artworks from the neglected cultures of North America, and quickly discovered that he had a particularly sharp eye for quality. Traversing the United States by car, Terasaki scoured flea markets, antique shops, and auctions in search of masterpieces. Through Simpson he sourced objects from Europe, and by the 1970s began to build a reputation as a “Dealer in North American Indian Art”, as his advertisements billed.

Like many dealers Terasaki maintained a personal collection of objects he particularly treasured. He lovingly photographed them himself, and in 2006 published an important book on his collection of Northwest Coast Art entitled Transfigurations: North Pacific Coast Art. This featured Terasaki’s greatest discoveries.
The Terasaki Collection spans cultures from all over North America, but is centered on two landscapes: the Pueblo Cultures of the American Southwest and the peoples of the Northwest Coast of North America. The Terasaki collection includes a particularly rich range of objects which illustrate the diversity of styles and forms created on the Northwest Coast during the 18th and 19th centuries. Particularly notable works include two Tsimshian portrait or ancestor masks of striking sensitivity and naturalism, which were used in dramatic performances of clan histories and mythologies. Both were once in the collection of the Heye Foundation in New York. A Tsimshian raven rattle – one of the iconic forms of Northwest Coast art – illustrates the ability of Northwest Coast artists to intertwine a complex array of animal and human images of potent symbolism into one concise and graceful object. A certain sense of humor and joy is found in one of the first objects Terasaki acquired, a Tlingit pipe bowl that depicts the rotund and bulging form of a baby bird, its held tilted back and mouth agape as if it is about to be fed.

"George Terasaki says you can see a masterpiece, even at a distance. Pick it up, test the weight. Examine it carefully."

The collection contains a remarkable group of kachina figures from the Hopi and Zuni people of the Southwest. Notable for their great age and quality, most of these kachinas were published in Classic Hopi and Zuni Kachina Figures (2006) and Kachina: George Terasaki Collection (2008). The collection includes an imposing figure of Sotuknangu, the deity of the sky and its attributes. Dating to circa 1880, this figure is notable not only for its age and sculptural quality but for its exceptional size – at 19 ¾ in or 50 cm, it is monumental for a kachina. The kachina collection also contains a famous group of figures which belonged to the artist Jo Mora (1876-1947). These kachinas were collected by Mora between 1904-1906, when he lived among the Hopi people near Oraibi in Arizona. Mora was one of the very few non-Hopi to ever take part in a kachina initiation, and his photographs and paintings form an important record of kachina ceremonies.

Hopi and Zuni Kachinas from the Collection of George Terasaki 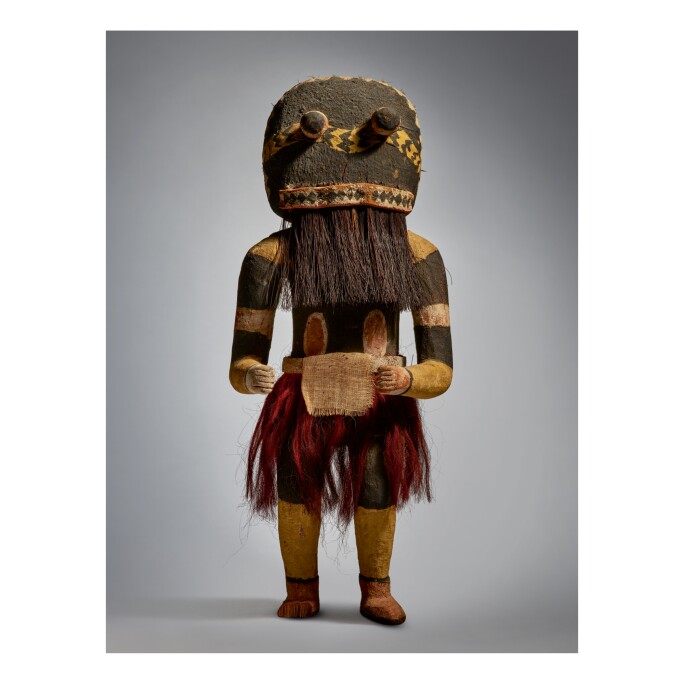 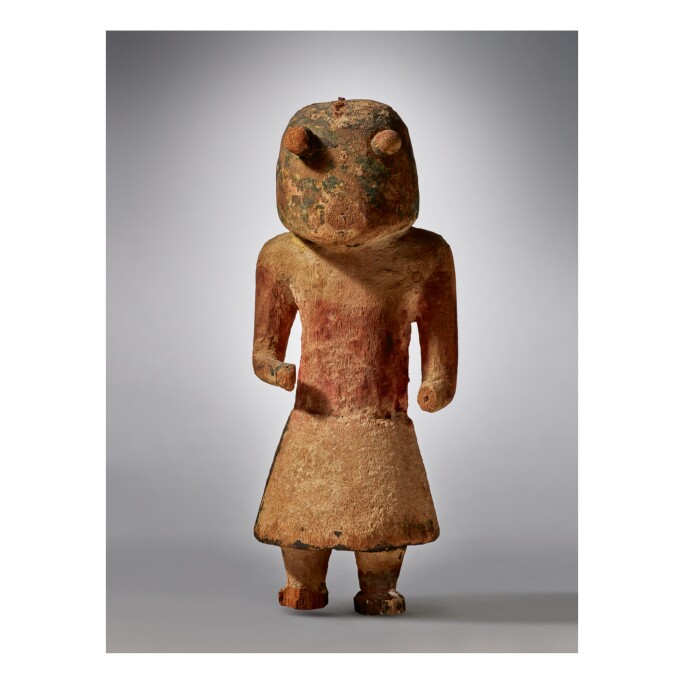 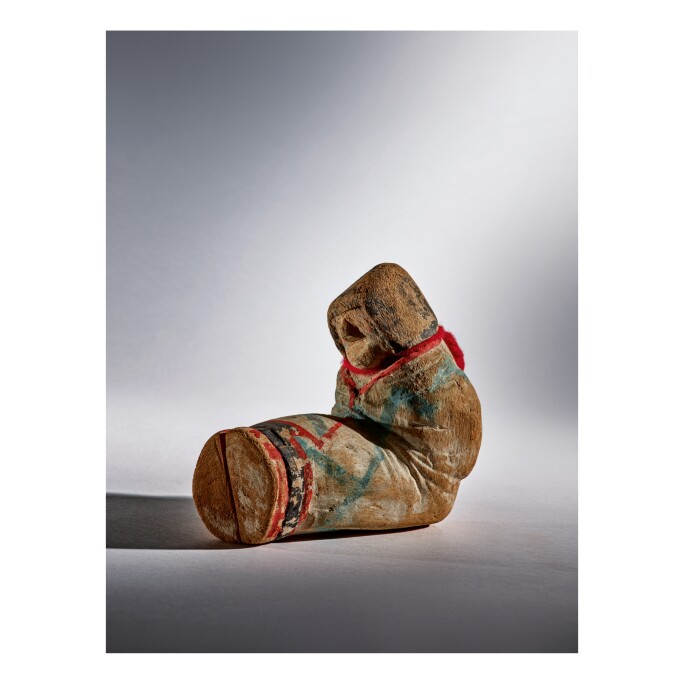 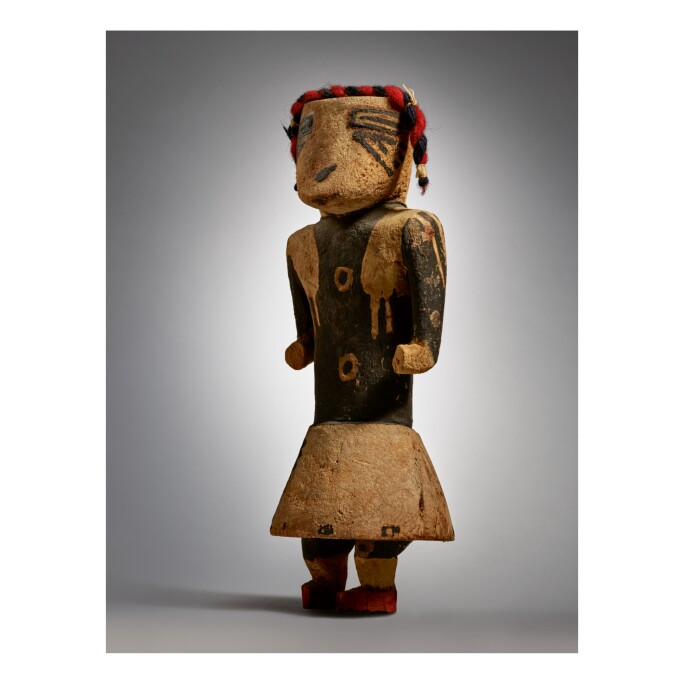 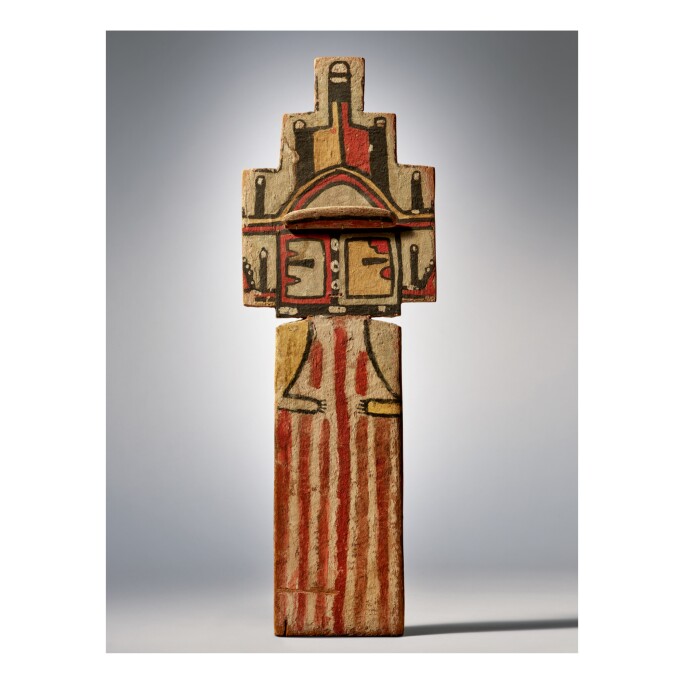 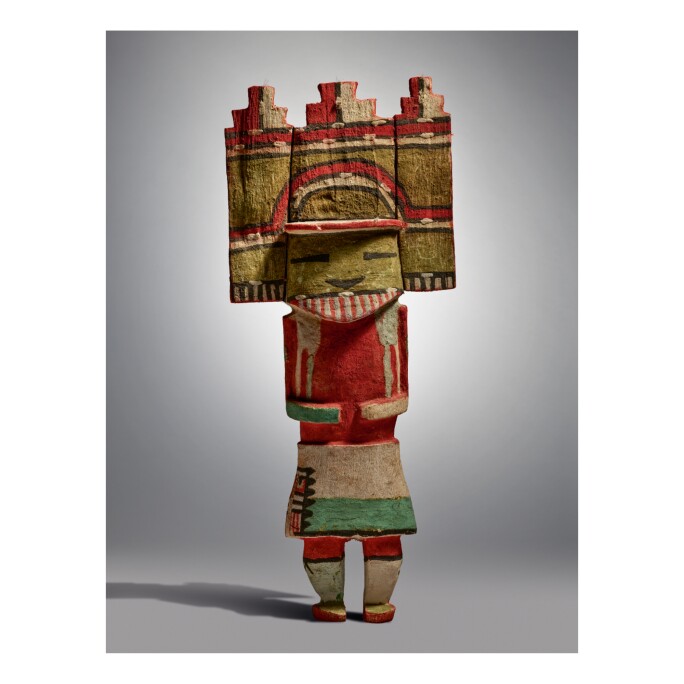 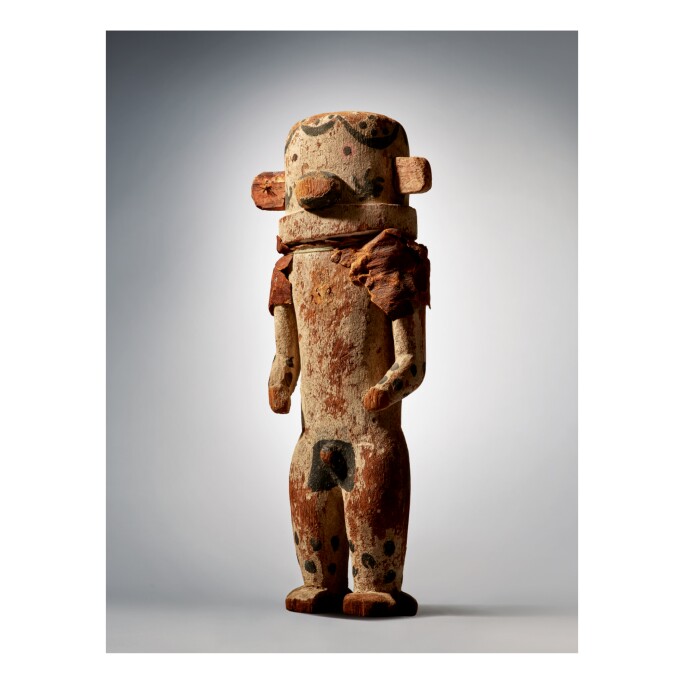 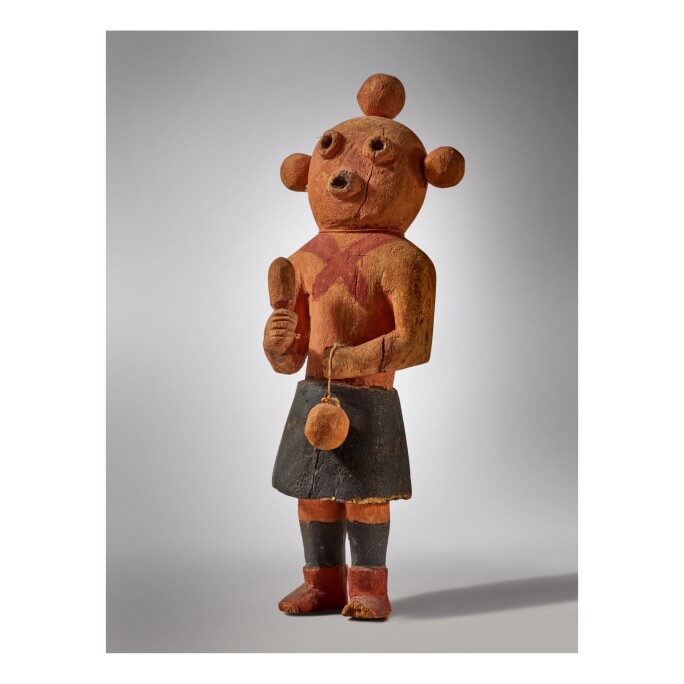 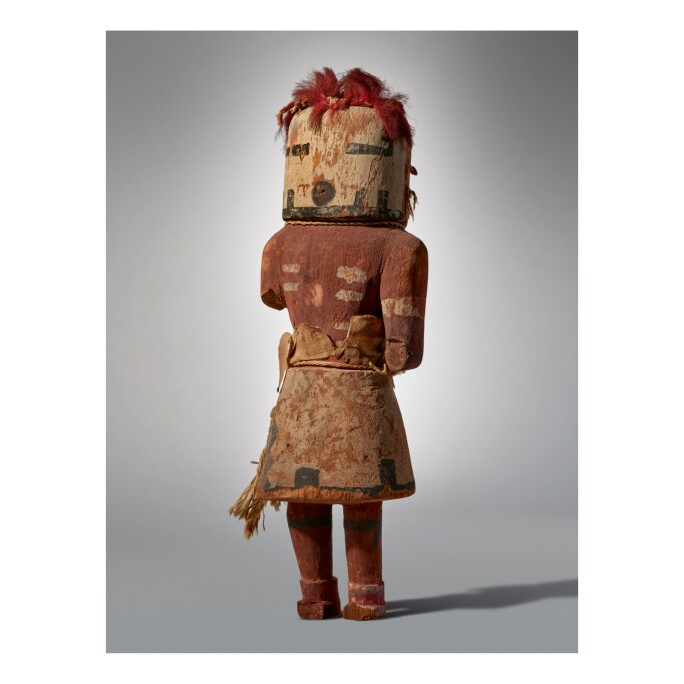 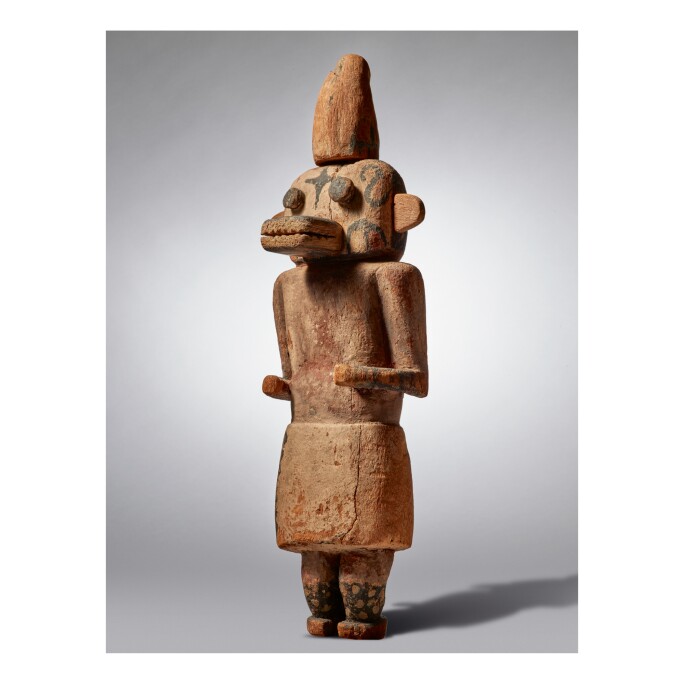 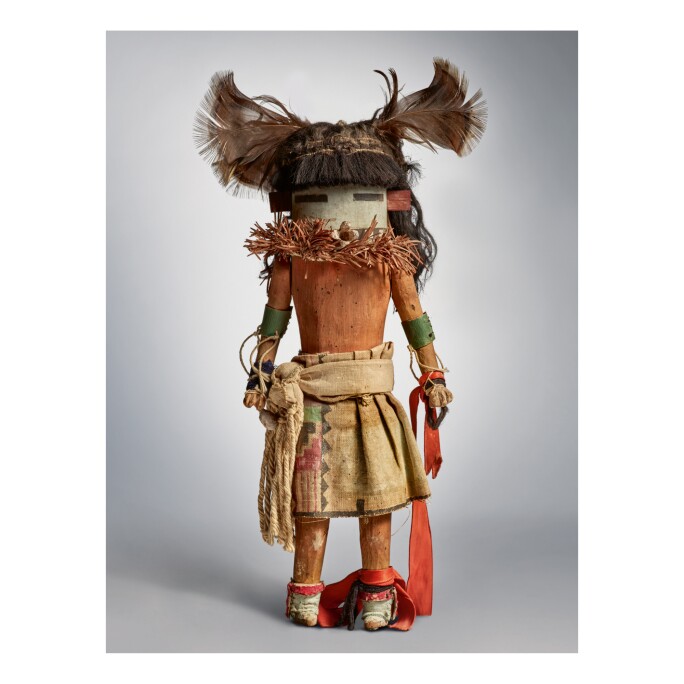 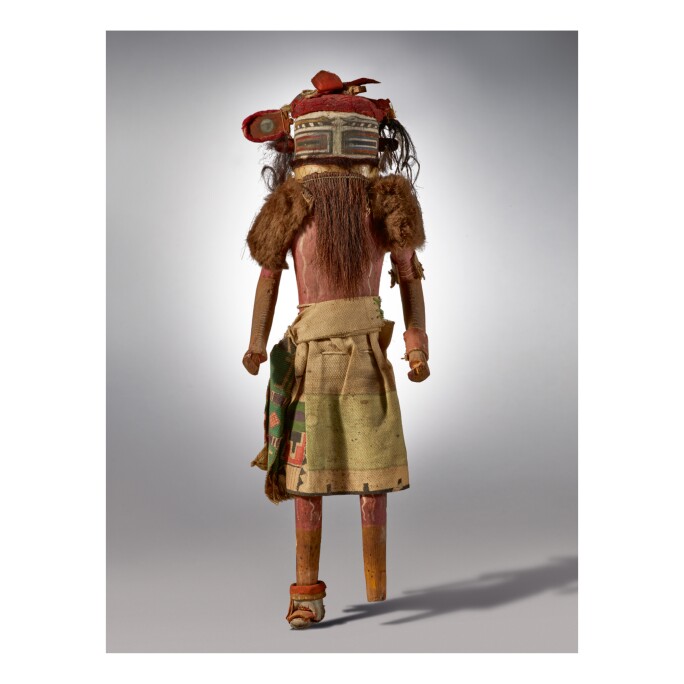 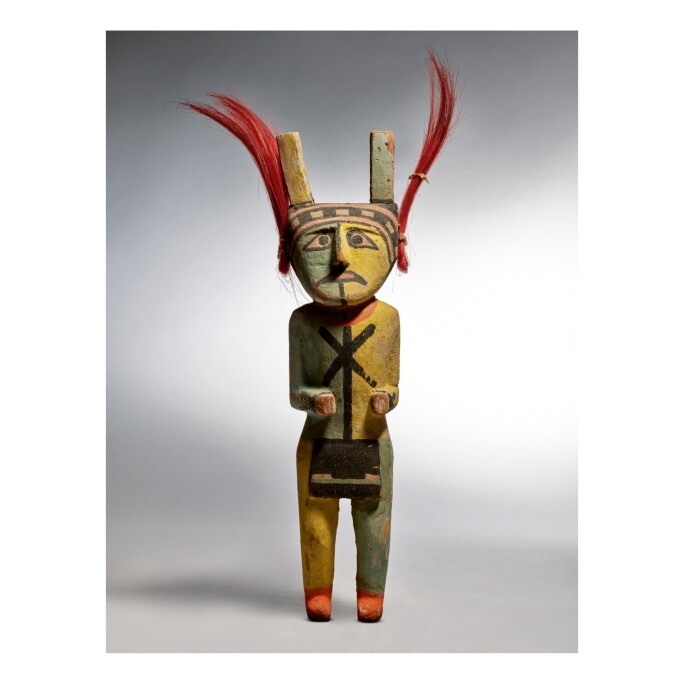 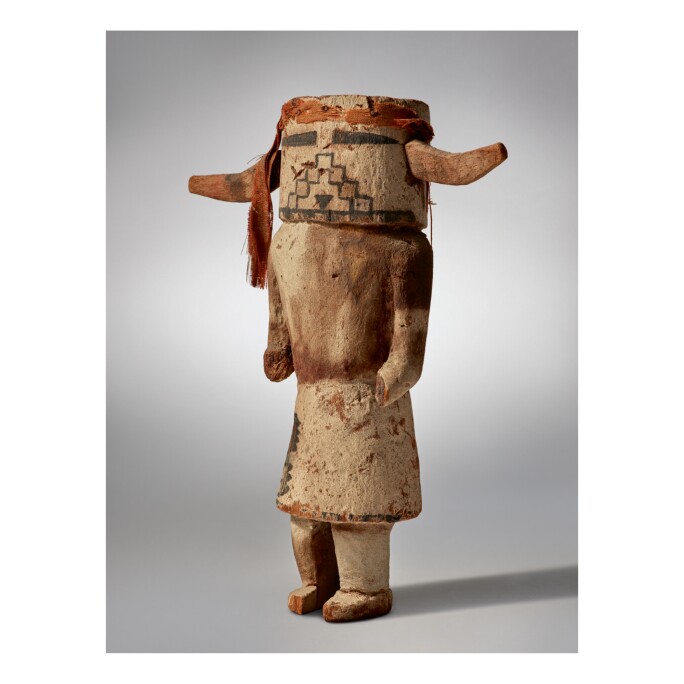 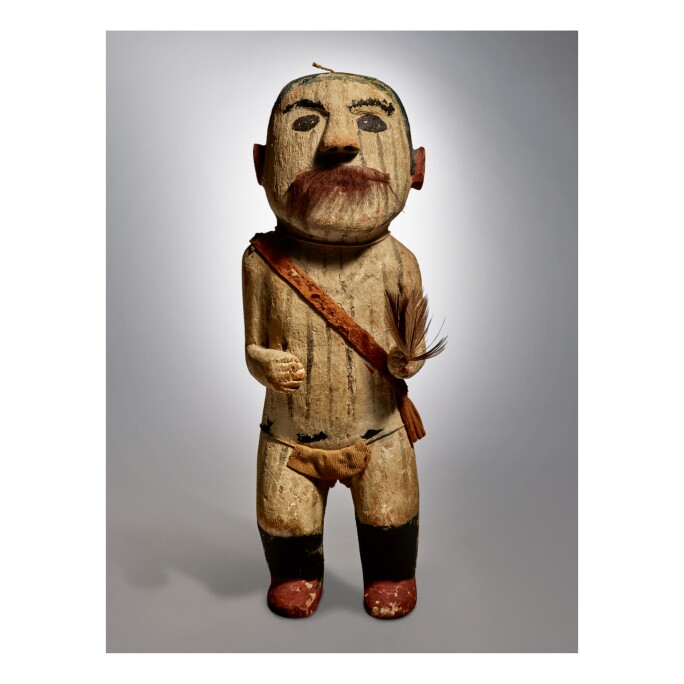 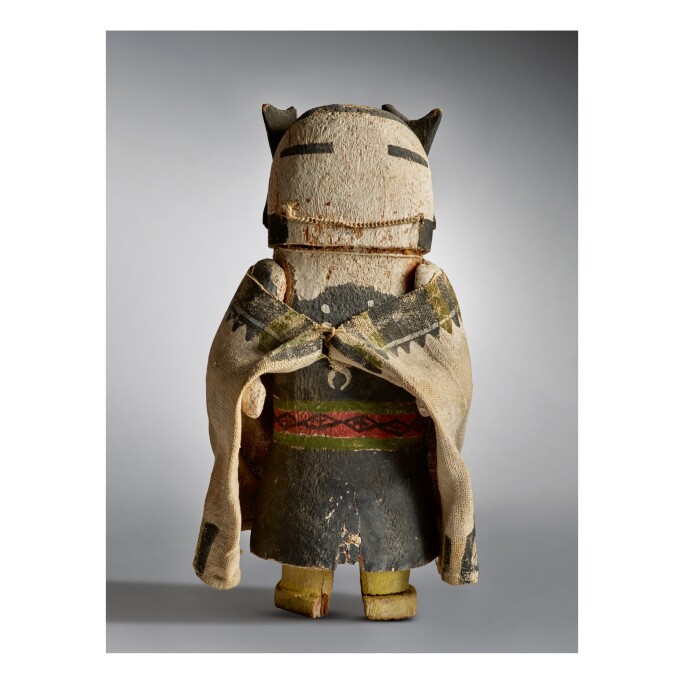 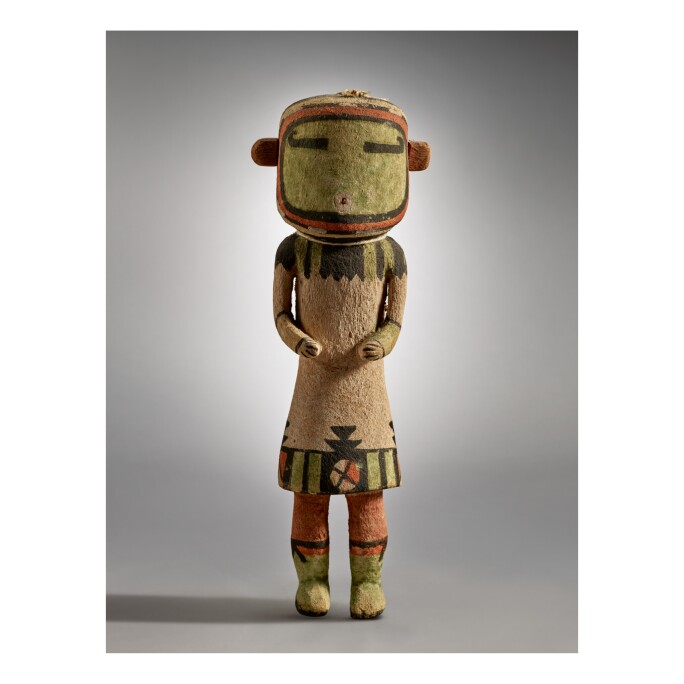 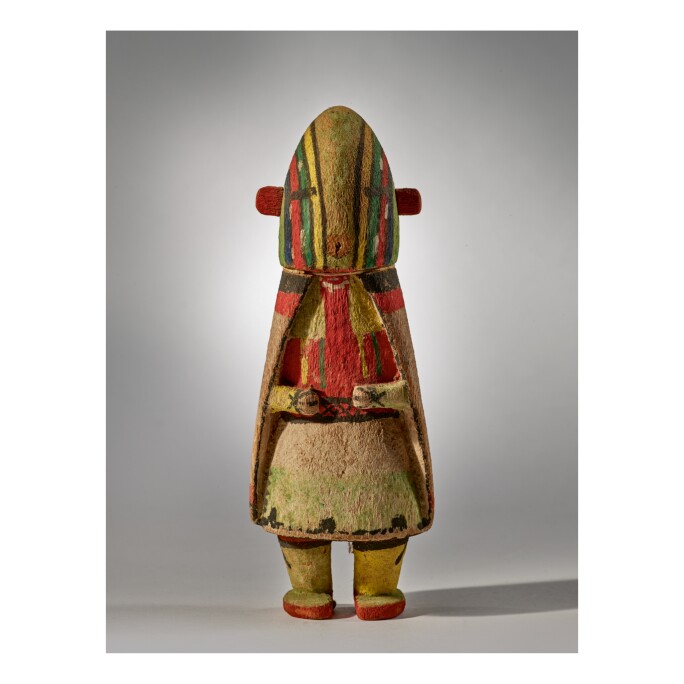 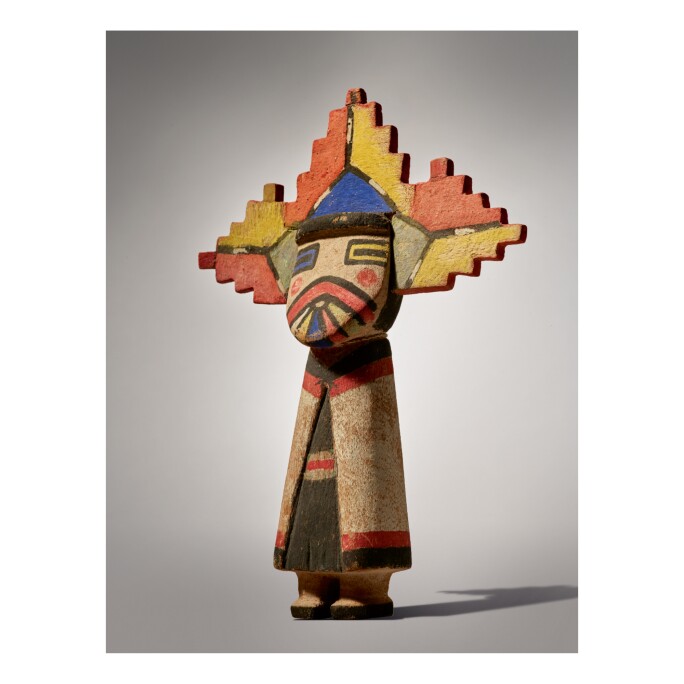 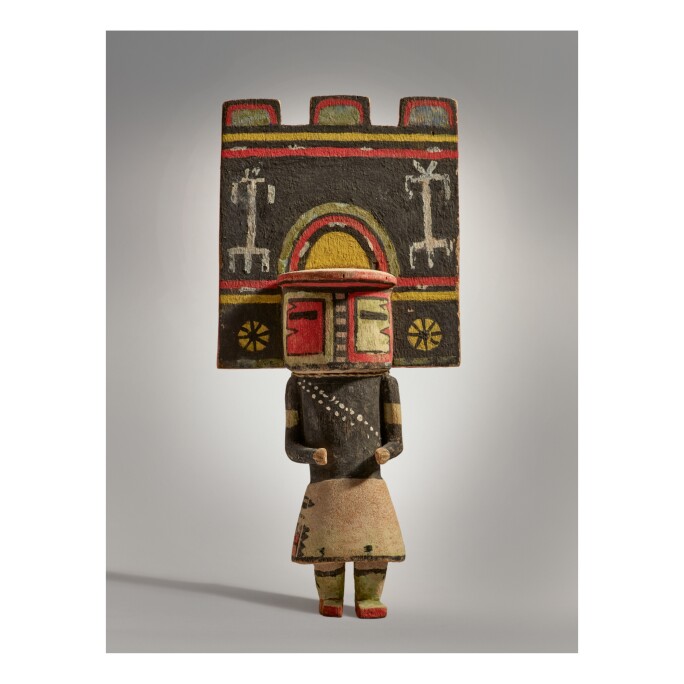 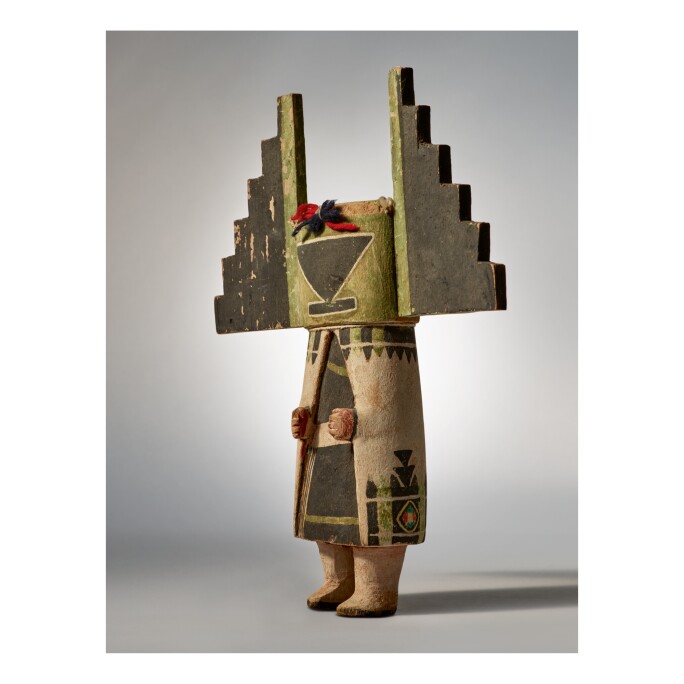 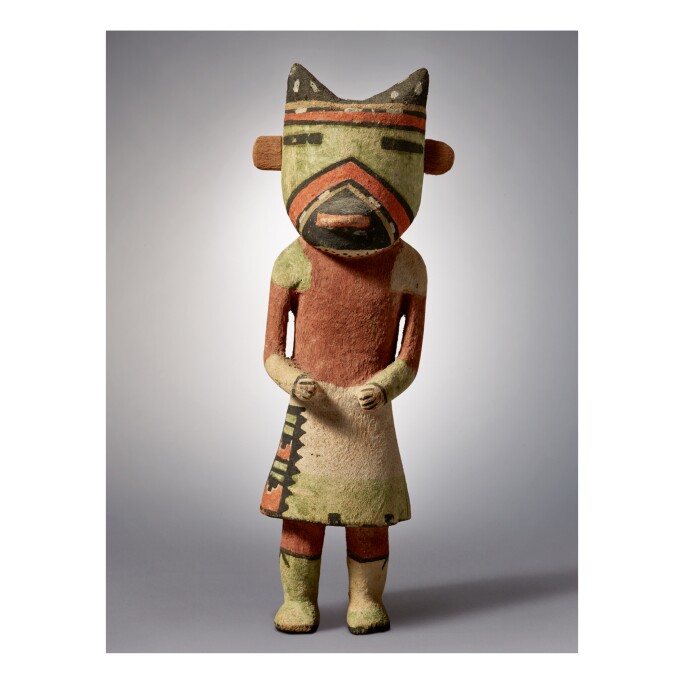 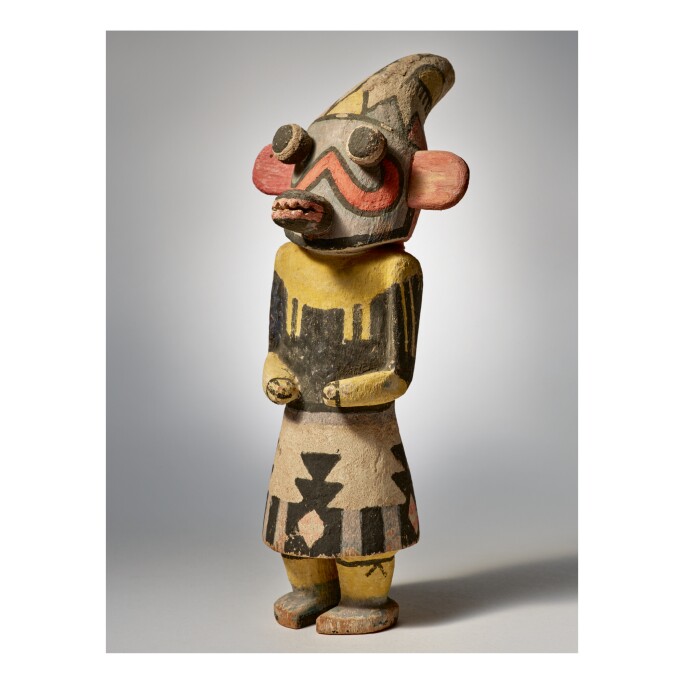 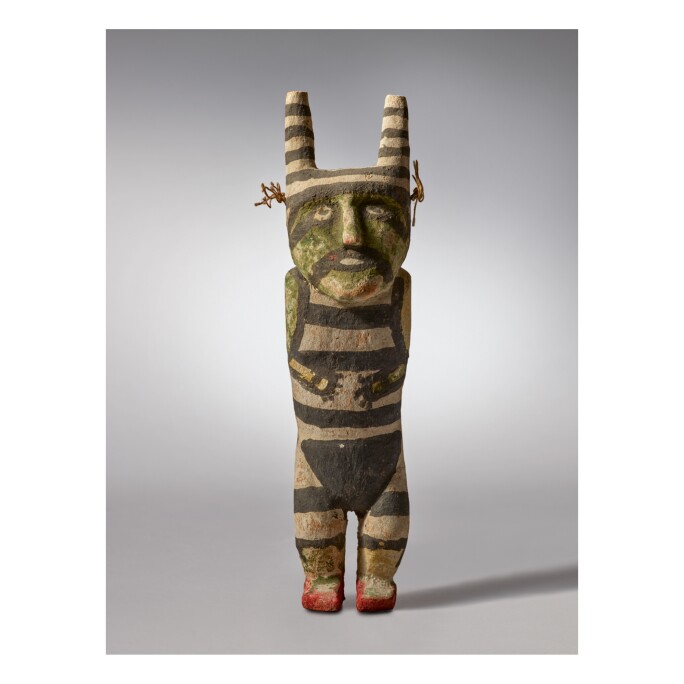 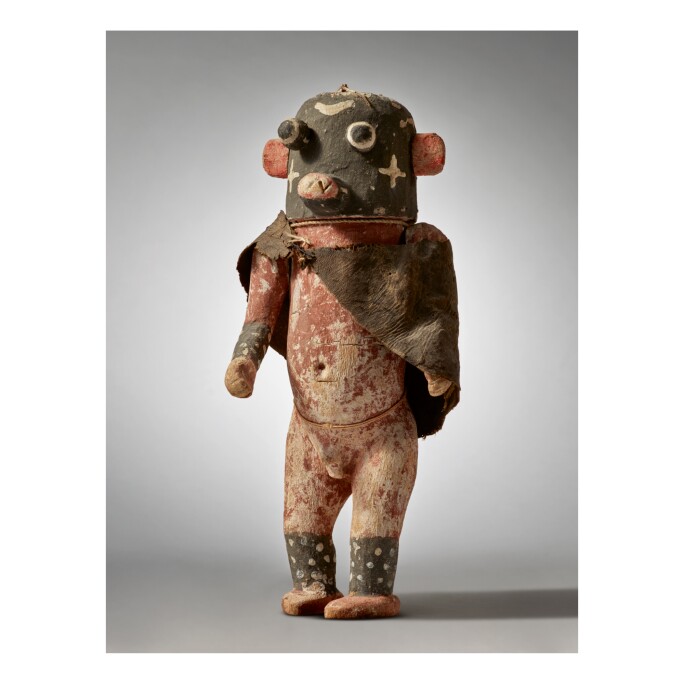 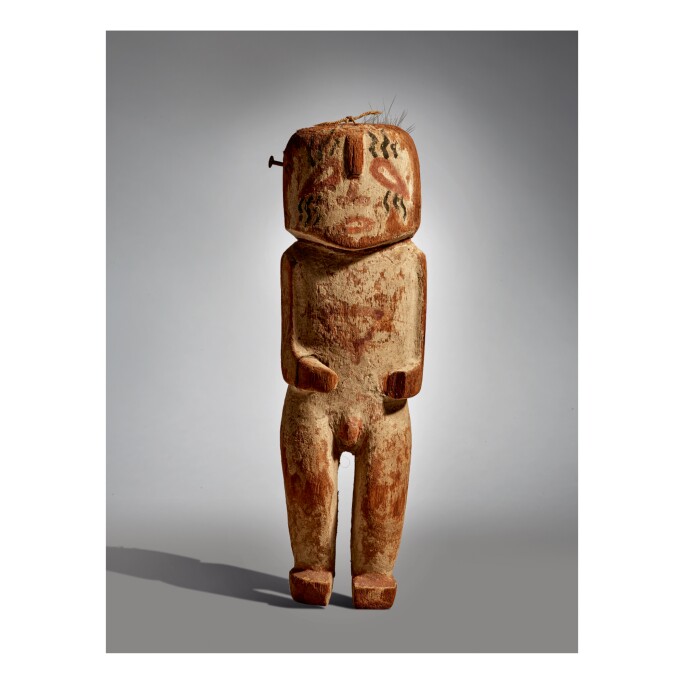 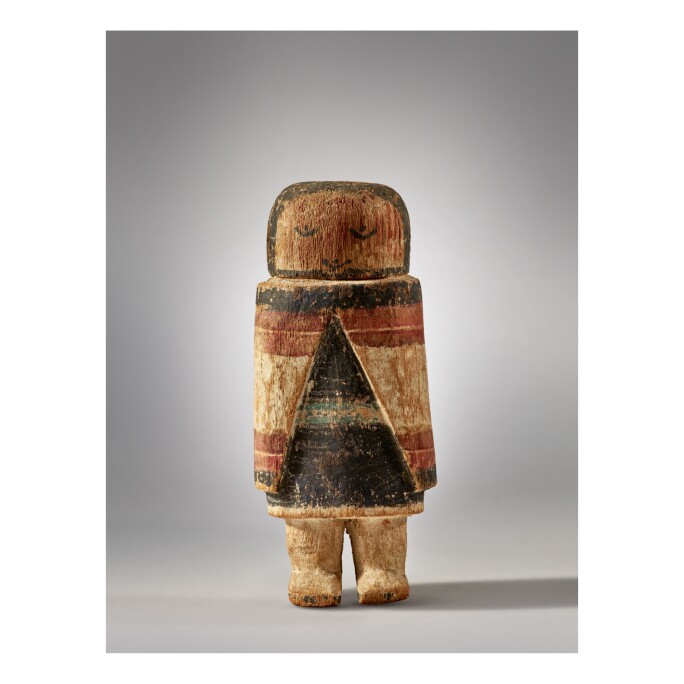