The Butcher, His Porsche, and the Auction Where you Can Meet them Both

T his very special event will offer up for sale the finest examples of Porsche models spanning the last 70 years, and the Speedster in this story will be one of those vehicles. What makes this 62-year-old car so special is that it remains in its original condition, and it provides a unique opportunity to experience a classic Porsche, essentially just as it was when it rolled off of the assembly line back in 1956. 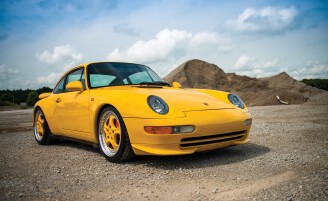 Automobiles | RM Sotheby's
Porsche Glossary: 17 Terms You Should Know, Plus How to Properly Pronounce the Brand

The story of this time-capsule car and its owner begins in Lancaster County, Pennsylvania. Robert P. Howry Jr. was born in 1935, the son of a fourth-generation butcher, and he too, would grow up to become a butcher. As time passed and America’s transportation infrastructure boomed in the post-war years, he discovered he had a pressing need for transportation – specifically for a car. It just so happened that his need was greatest just as America was beginning to experience a time that many consider to be the Golden Age of the Sports Car. Although he claims there was no particular person or event that led him to a love for sports cars, Mr. Howry will tell you that after a less-than-stimulating experience with a Buick, he knew there had to be a vehicle out there that could make the journey thrilling. “The local undertaker had a pretty fast Buick, and I liked that car so I bought one. But if you had a Buick DynaFlow, you quickly realized there wasn’t much performance.” So Mr. Howry, like so many young men of this incredible time, invested in a high-performance British car – a 1952 Jaguar XK120. For less than $2,000 at the time, he was well on his way to becoming a part of the new European sports car scene.

After a few years and quite a few well-driven miles with the XK, he sold it for just a few dollars less than what he paid, and then invested in his first Porsche, a 1955 356 Continental Coupe. This was not his first German car, however, as he had already discovered the sturdiness of well-built Volkswagens. He drove the Continental many miles and took full advantage of the excellent handling of that amazing little car. Eventually, he also came to understand the sturdiness of Ferry Porsche’s cars when he dozed off and struck a pole, totaling the Continental. He walked away from the accident, but was now fully committed to German engineering.

In 1958, Mr. Howry headed to Army basic training, which would ultimately take him to Porsche’s mother country of Germany. It was not long until he set to work on acquiring another Porsche. After much maneuvering with his army superiors, he was able to acquire a 1959 Porsche 356 Super A Sunroof Coupe. Together, he and an army buddy who had a Mercedes-Benz 190 SL covered more than 17,000 miles in under seven months. “I got to know my local Porsche mechanic quite well,” says Mr. Howry. “Back then, the service intervals were just a few thousand miles, and I needed an oil change about every three weeks!” These well-driven journeys would take him through the Alps, down the route of the Mille Miglia, and through many beautiful and snow-covered European villages. These many miles through Europe cemented his love for the Porsche marque, a love that followed him home to Pennsylvania after his tour with the Army was complete. “We left Germany out of Bremen, and the Porsche would come later on a Polish cargo ship. I arrived in New York and waited for the 356 to show up, then it was home to Lancaster and right to the butcher shop.”

It was now 1960, and Mr. Howry would run through a procession of reliable VWs for his growing butcher business: Beetles, cabriolets, and even vans and transporters. Along the way, the growing sports car community would bring another very special person into his life. “I joined the Susquehanna Sports Car Club, as it was one of the only ones around at the time, and that’s where I met Joan. I mean, she had an Austin Healey 3000!” One year later, in 1964, they became husband and wife – theirs truly was a marriage born out of a passion for sports cars and for one another.

It would be just a few years later that the very special Porsche Super Speedster of our story would enter his life as well. In 1967, Manny Smith, a local scrap metal dealer, decided he needed a new airplane for his business, and the best way to find a few more dollars, he surmised, was to sell his Glacier White 1956 Speedster. To Mr. Howry’s best recollection, Mr. Smith had originally purchased the Speedster new from the Porsche dealer, Lancaster County Motors, which continues to operate to this day as a Mercedes-Benz dealer. “I was always a ‘coupe guy,’ but Manny had his convertible for sale, and he said it was certainly worth $2,000 – so I bought it.” When asked why he bought a convertible after so many wonderful experiences with Porsche coupes, Mr. Howry responded, “Well, that Speedster was just so darn good-looking. I didn’t really want it, but it just looked so pretty!”

A very important part of this Speedster’s appeal to the bidders at RM’s Porsche sale will result from what did not happen next. Unlike all of the other Porsche models Mr. Howry owned and would acquire later, he just did not drive this Speedster much. “It wasn’t a very comfortable car, so I only drove it about 3,000 miles over the next 51 years.” However, as a result of his mechanical sympathy and respect for the car, it would spend those next 51 years of its life pampered in a specially built garage. In the years that followed its purchase, Mr. Howry took the car to a few shows, which would include winning a 1st place at the 1979 Porsche Parade in Reston, Virginia, and participated in a few tours with Joan in the passenger seat. But mostly he just tended to the car and saw to its regular upkeep and maintenance. “I always looked after the leather and made sure the oil was changed and the engine ran well.” He even made sure the original rubber trim was preserved, treating it with glycerin oil about once a year, and it presents nearly as new to this very day!

As time passed, the Speedster remained in excellent original condition, so much so that other Porschephiles seeking knowledge on exactly how to restore or judge other 356 models would come to inspect it, examining the engine, the interior, and every nut and bolt of the car.
This amazing time-capsule car is a lasting, original testament to exactly how the Porsche factory engineered and assembled them. Even though it presents as though it just rolled out of the best restoration shop, no restoration has ever been performed on Mr. Howry’s Super Speedster, because none has ever been needed. His current mechanic and friend Dave Baker, of Classic Auto Restorations in Lancaster, Pennsylvania, an experienced 356 specialist, looks after the car to make sure it runs well and remains in top-flight condition. When asked to provide his assessment of the Speedster, Mr. Baker simply says: “I like original Speedsters, and this is a doggone great, well-running example!”

Over the years, Mr. Howry would bring other Porsche models into his family, along with more VWs and even a Mercedes-Benz. When asked why he traded in and out of many cars but never abandoned the Speedster, he simply responds, “It’s a pretty car, and I just liked to look at it!” This special Speedster, with just under 36,000 original miles, still has the original side curtains, pullthrough leather key fob, manuals, and so many other unique original parts. “I still have the original tool roll from Porsche,” adds Mr. Howry. And even though the lure of adding Porsche chrome wheels was too strong to resist in 1969, the original steel wheels also remain, quietly awaiting the enjoyment and appreciation of the car’s next caretaker.

Now the opportunity has come for someone else to continue the story of this very special Speedster. This story is so wonderful because this car was born just eight years after the Porsche family began its car-building enterprise, yet it remains so complete and so original, having had only two owners thus far in its lifetime. When asked why he decided to pass the car on now, Mr. Howry says, “Well, I just decided it’s time – time for someone else to appreciate it the way I did – and that you folks at RM Sotheby’s would be the best people to do that.” 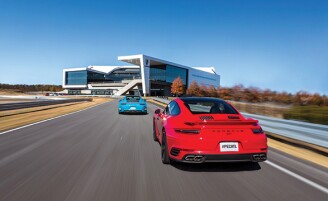 Automobiles | RM Sotheby's
Porsche Glossary: 17 Terms You Should Know, Plus How to Properly Pronounce the Brand