The Brutal Beauty of Jean Dubuffet

A head of the opening of the Barbican's upcoming Jean Dubuffet exhibition, Brutal Beauty, sponsored by Sotheby's, curator Eleanor Nairne discusses the provocateur's rebellious spirit and true originality. The first major UK retrospective of his work in over 50 years, the exhibition coincides with Sotheby's Modern Renaissance: A Cross-Category Sale on 25 March, which features Dubuffet's stunning La cavalière au diamant (The Dancing Partner with Diamonds).

Mariko Finch: "Art should always make you laugh a little and fear a little. Anything but bore”. This quote makes an appropriate entry to the exhibition; what was Dubuffet’s driving force throughout his career?

Eleanor Nairne: Dubuffet was a relatively late starter – he was 41 when he decided to fully devote himself to being an artist. But he managed to muster an extraordinary driving force in the decades that followed, producing over 10,000 works in his 40 year career. His aim was to disrupt our habitual ways of seeing the world and he experimented relentlessly with forms and materials in order to achieve that effect. He embraced play as a vital energy in his practice and bemoaned the tendency of the art world to "be suspicious of anything pleasurable in a work of art. According to a certain trend of thought, which is now all the rage, only a dull, unenjoyable piece is praiseworthy and – to put it bluntly – virtuous".

Dubuffet was sometimes a provocative figure, with some divisive opinions on certain subjects. Did he enjoy treading that line of controversy?

Definitely! Dubuffet wrote extensively about the purpose and meaning of art and was not afraid to divide opinions with the stridency of his arguments. He knew that overturning traditional models of thinking about art would inevitably cause a backlash. He also courted controversy with his crude imagery, especially the ‘hautes pâtes’, which many considered scandalous when they were first exhibited at the Galerie René Drouin in 1946.

Why did it feel like the right time to stage this exhibition?

Dubuffet continues to be an incredibly significant figure for so many contemporary painters working internationally, yet he has not had a major UK exhibition since the Tate’s in 1966. So it felt urgent to address this oversight. I think understanding the breadth of his career will be a true revelation for many of our visitors. If I think of the impact that his first UK solo exhibition at the ICA in 1955 had on a generation of artists including David Hockney and Paula Rego, it’s exciting to imagine what the legacy of this presentation of his work could be.

Alongside the many works by the artist in the show, you are also exhibiting a number of works from Dubuffet’s own collection of Art Brut. How important to his practice was surrounding himself with the work of others?

Art Brut was a central part of Dubuffet’s thinking about art so it felt crucial to include works by these artists at the Barbican and to take a closer look at the ways in which Dubuffet’s involvement in Art Brut impacted his own work. In the first ‘notice’ about the Compagnie de l’Art Brut, Dubuffet explained that their mission was "to seek out the artistic productions of humble people which have a special quality of personal creation, spontaneity, and liberty with regard to convention and received ideas. To draw the public’s attention towards this sort of work, to create a taste for it and encourage it to flourish". Our aim is not dissimilar.

Dubuffet was drawn to culturally rebellious people on the fringes of conventional society – what was it about those individuals that spoke to him, and inspired his own methods of production?

Dubuffet was trying to find ways to break out of society’s cultural conditioning. He left the prestigious Académie Julian after six months because he believed he could attain a better artistic education in the real world. He was inspired by artists, most of whom would never have described themselves as such. Free from the conventions of taste, their work seemed to him to possess true vitality. This was in stark contrast to the work of intellectual artists, who Dubuffet damningly referred to as "directionless, impenetrable [and] lacking in vitamins". He was, however, clear that his own work could not be classified as Art Brut since his bourgeois upbringing and cultural training meant that he was already too mired.

Dubuffet used unorthodox materials such as sand, straw, gravel, coal and glass mixed with paint in the creation of his works. How did he land on this kind of experimentation?

Dubuffet understood that the use of traditional materials such as canvas and oil paint were likely to encourage him to produce very traditional work. Although he did use these materials too, he incorporated cheap materials that would provoke unexpected results in terms of liquidity, tactility and overall form. He wanted to get at the gritty textures of everyday life.

What would Jean Dubuffet make of the world in 2021?

Staging this exhibition in the context of the Covid-19 pandemic has been extraordinarily challenging. However, I like to think that Dubuffet would have been pleased to see the ways in which the scale of global disruption has forced us to abandon so many habitual patterns of living and working, opening up radical new possibilities. Whether we have his courage to embrace them is the question.

What has been your personal highlight of researching and realising this exhibition?

There have been too many exciting discoveries to name. But really the overriding pleasure has been to spend so much time in the company of an artist with a miraculous capacity to find the extraordinary in the least likely of places. As Dubuffet encouraged us to remember: "A crack in the ground, sparkling gravel, a tuft of grass, some crushed debris, offer equally worthy subjects for your applause and admiration". 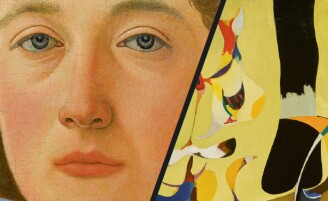