The Birth of Art and Liberty, Egypt's Surrealist Art Movement

By Sotheby's
Sotheby’s 20th Century / Middle East sale on 23 October features several works from the surrealist Art and Liberty Movement, founded in Cairo in the 1930s. Read on to discover more about this revolutionary movement and the artists who were part of it.

F ormally established in 1938, the Art and Liberty movement was founded in resistance to the rise of right-wing radicalism in Europe during World War II. It was a rejection of Fascism and Nationalism that were spreading across the region, but more than that, it objected to the status quo in politics, arts and academia.

Its founder, writer and thinker Georges Henein, penned the manifesto “Art and Liberty Manifesto Vive L’Art Dégénéré” which stressed the importance of individualism and imagination as the greatest revolutionary forces. It was written in both French and Arabic and widely distributed throughout Cairo.

At this time, Egypt was a haven for many artists, poets, writers and critics. This young group of liberators believed that Egypt could nurture their dreams of liberation and freedom of expression where Socialist beliefs could be embraced and advocated. They rebelled against the existing artistic, social and political situation, abolishing conventions, and standing up for their independence of thought within a conformist society. Fine art is arguably the best example of the influence of the Surrealist movement in Egypt, as unlike literature, it offered its audience the “universal language of colours and symbols (Luthi, al-Ḥaraka ’s-sūryālīya ’l-miṣrīya, p.139). Further, these artists have had a fundamental impact on the Egyptian art scene, providing a heritage that remains omnipresent in Egyptian culture to date.

We believe that it is mere idiocy and folly to reduce modern art, as some desire, to a fanaticism for any particular religion, race or nation.

Ramses Younan (1913-1966) was not only one of the most prominent painters in Egypt, but was also an essayist, critic and the co-founder of the Art and Liberty group. His 1940 work Untitled portrays a distorted woman sleeping against an arrangement of wooden panels. Younan accentuates certain features, such as the woman’s long nose, large eyelids and hollowed cheeks, as well as her disproportioned breasts and arm. Completed during the height of the movement, this work explores the theme of poverty and inequality during a time when Cairo experienced an extreme income disparity between the wealthy one percent and the underprivileged. As the most highly acclaimed father of Egyptian surrealism, Ramses Younan has left an indelible mark on the Egyptian art scene of the last century.

Angelo de Riz was an Italian artist who escaped fascist Italy and sought refuge in Egypt. Shortly after migrating, De Riz joined the Art and Liberty movement and eventually attained Egyptian nationality. De Riz worked closely with Georges Henein and Ramses Younan to further advance surrealism in Egypt by becoming a prominent member of the Art and Liberty group, as one of its first signatories.

Antoine Malliarakis Mayo was born in 1905 in Port Said, Egypt to a French mother and Greek father. Having completed his education in Alexandria, he was accepted to the Beaux Arts in Paris at the age of twenty, where he relocated and met the father of Surrealism, André Breton, in 1927. Breton would end up having a profound influence on his work. Mayo’s 1937 portrait, Le Marin (The Sailor), depicts an unusual subject when compared to his better-known works, which portray distorted bodies or unsystematic juxtapositions. This portrait exemplifies Mayo’s use of luminescent colours and the importance of light in his work, which is visible throughout his extensive oeuvre.

Egyptian painter, poet and teacher Fouad Kamel supported the Art and Liberty group in Cairo and throughout World War II it was a platform for him to exhibit his works. In a similar way to others in the movement, Kamel’s writings and paintings often explored the adversity facing the disadvantaged and impoverished of Egypt. Despite Art and Liberty’s disintegration in 1948, Kamel continued to organise exhibitions of surrealist art in the late 1940s. The present portrait The Green Face illustrates a young woman donning earrings and only revealing her side profile to the observer. Her body is made up of geometric shapes and more illuminated than her face, demanding the viewer’s attention, as if her body were a formula to be studied. The image of the fragmented body became a source of social as well as artistic protest for Egypt’s surrealist artists. 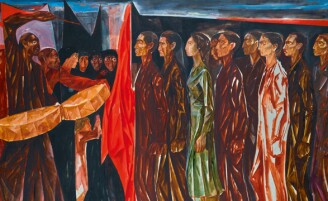