Amongst the splendid and diverse objects to be offered at the upcoming Ballyedmond Collection sale in London on 23 and 24 May is an extremely unusual eighteenth-century curio, a large George II Palladian ‘Baby House’.

Although to the contemporary viewer it may appear to be a child’s doll’s house, English baby houses such as this had more in common with seventeenth century cabinets of curiousities than the children’s toys they eventually developed into in the later nineteenth century. What eventually culminated in the English craze for ‘baby houses’ in the Georgian period originated in the Netherlands one hundred years earlier.  A fashion developed among wealthy merchants for specially-commissioned cabinets on carved stands, divided into several small rooms and furnished as miniature houses, often extremely elaborately. Petronella Brandt-Oortman, wife to an Amsterdam silk merchant, commissioned one of these baby houses (c. 1700) and furnished it as a highly fashionable home of the day, with delicate porcelain dining sets, a lacquered cabinet, and a rosewood-panelled reception room. Oortman was so pleased with her miniature townhouse, now in the Rijksmuseum in Amsterdam, that she had it immortalised in a painting by Jacob Appel around 1710.

In England, the demand for these miniature houses began around the same time, the earliest surviving examples dating to 1691, belonging to Ann Sharp, daughter of John sharp the Archbishop of York. Like the Dutch houses, it was a plain-fronted cabinet divided into four floors of rooms filled with miniature furnishings. After 1700, the English baby houses began to appear with proper facades with doors and windows, to give the appearance of a recognizable house on the outside as well as within. These houses were designed by architects and were often modelled on real homes, usually of the owner, as is likely the case with our Georgian Palladian Baby House. Robert Adam is known to have designed baby houses and Thomas Sheraton and Thomas Chippendale made furniture for the Nostell Priory (Nostell Priory, West Yorkshire) baby house. The George II Palladian Baby House to be offered at Sotheby’s is a three storied townhouse resting on a raised basement, the entire house built of a solid mahogany. Inside, it is divided into nine rooms each featuring an early Georgian style fireplace. The upcoming Ballyedmond sale provides a rare opportunity to own a beautiful example of an intriguing eighteenth century pastime. 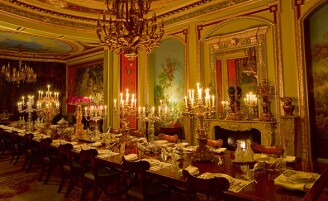