Craftsman and designer Thomas Canada Molesworth (1890–1977) created a true Western vernacular style for furniture, characterized by knotty wood burls and vibrantly colored leathers and woven Chimayo cushions. Born in Topeka, Kansas to a wealthy family, Molesworth attended the Art Institute of Chicago before starting the Shoshone Furniture Company in Cody, Wyoming in 1931. During the Depression, the business struggled; it became clear to Molesworth that he would need to adapt and innovate to survive. In 1932, he created a log cabin interior in his storefront and filled it with handmade pole furniture. As luck would have it, Philadelphia newspaper magnate Moses Annenberg purchased a ranch in nearby Sand Creek, Wyoming, and was looking to furnish it. Driving through Cody, Annenberg saw Molesworth’s dynamic window display and hired him on the spot, ordering all the furniture, rugs and lighting for his new 11,000-square-foot lodge. A year later, when Molesworth delivered the furniture and accessories, Annenberg was thrilled.

That success led to more commissions, and by the mid-1930s, the Shoshone Furniture Company was thriving. Around that time Molesworth’s received one of his largest and most important commissions: furnishing George Sumers’s Old Lodge, in Glenwood Springs, Colorado. When the lodge and its contents were auctioned in 1995, Ruth and Jake Bloom acquired many signature examples, which filled their home in Sun Valley, Idaho. Pieces from Old Lodge, such as a charming animal-motif bedframe and a pair of "Tipi" doors, as well as rare examples from Molesworth’s other major commissions will be offered in a dedicated sale of the Bloom collection at Sotheby’s (23 May, New York). Here we take a closer look at two particularly interesting examples the Western vernacular designs that have made Molesworth a cult figure in 20th-century American design.

With its supple leather surfaces and vibrant hues, this rare console radio is a testament to Molesworth’s technical mastery. The radio was once part of a ranch commission of the Ragner family, who displayed it as the centerpiece in their den. The expertly applied leather gracefully follows the contours of the wood moldings, echoing Italian furniture of the 1940s. Contrasting bright blue and white leather against the hand-peeled fir trim at the top and skirt adds dimension and a decorative element to this piece. The radio retains is original internal elements (though not currently functional), Bakelite buttons and switches as well as its front cloth panels with hand-painted Native American “Yei” figures, likely executed by Molesworth himself.

The famous “O.T.O” Ranch in Gardiner, Montana, was an important early commission for Molesworth. Located near Yellowstone National Park, “O.T.O” was one of the first ranches to market an all-encompassing “dude ranch” experience to vacationers, including log cabin retreats, fresh local food, horseback riding and day trips to the national parks. With notable guests such as Theodore Roosevelt and Marcellus Hartley Dodge (son-in-law of William Rockefeller), “O.T.O.” Ranch is where Molesworth’s quintessential designs using knotty burled fir and soft leather first gained traction among the American elite. The octagonal games table and associated chairs presented here originated with the 1934 commission. Distinguished by their characteristic hand-painted leather upholstery and routed tipi motif, the panel-back chairs have the additional flourish of small yellow leather medallions. 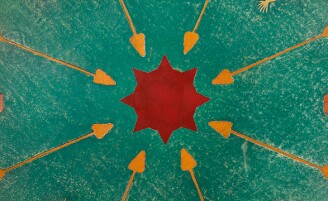