By Deborah A. Goldberg, Ph.D.

I samu Noguchi’s newly discovered “free-form”1 marble-topped coffee table (1945-1947) bridges design and sculpture. It is one of only three known biomorphic coffee tables sculpted by the artist, each having a different type of marble, a spun aluminum bowl, and three individually shaped legs carved of tight-grained redwood by Noguchi himself. In the present table executed with dark grey marble, one leg stands out for having a lobed foot at its base. The bowl inserted in an asymmetrically placed hole appears to be a prefabricated product that the artist modified by adding two hand-welded wings that allow it to spin into place from below. It is an extraordinarily refined and intellectual work that embodies the artist’s singular aesthetic vision.

Noguchi executed the first example in this exceedingly rare, sculpted table series for his half-sister, Ailes Gilmour Spinden.2 A second example is currently held by a corporate Japanese collection. The table presented here was only recently discovered from the former collection of a New York City art teacher and recorded by the Noguchi Museum. The original owner’s artistic eye and carefully considered design choices guided her to furnish her home in the 1950s with up-to-the-minute décor of the era. Her residence was dominated by Herman Miller designs, and it is likely that she purchased the Noguchi table from Herman Miller in New York City.3 The table was a fixture of her family’s daily life, a centerpiece for entertaining, and its bowl was a repository for pebbles collected from the beach. This dynamic engagement with the table speaks to its Japanesque sensibility and Noguchi’s desire to allow for creative and modernistic ikebana. This intention is documented in both period photographs of the example owned by Ailes Gilmour Spinden, which held a spare floral arrangement as well as incense, and for the second series of the form produced from 1947-1949.

The three unique coffee tables are a limited edition that precede at least five known marble-topped coffee tables that were produced by Herman Miller between 1947-1949, also of different marbles and woods. In this second series, the tables have three identical legs akin to the dorsal fin design of one of the legs of the earlier series. In 1949, Noguchi’s marble table from the second series was displayed in the newly opened Herman Miller Furniture Company Showroom in Los Angeles, designed by Charles and Ray Eames. The communication of this novel form into a standardized yet still limited production further underscores the highly experimental quality of the original three hand-carved tables. During the same era as the present table, Noguchi made several commissioned tables that share the organic design and use of natural materials. The artist’s earliest documented table, Table for A. Conger Goodyear (1939), also joins an exotic wood (rosewood) with an industrial material (Herculite plate glass).4 A slightly later dining table from 1948-1949 that Noguchi designed for fashion photographer Milton H. Greene and his wife Evelyn sheds light on the present coffee table. The Greene dining table shares the dissimilar legs and the same type of hand-welded bowl, but larger. It was part of a commission that also included Noguchi’s Cloud sofa and ottoman, which Greene photographed while Noguchi hand-carved the ottoman legs at his home. Noguchi used a two-handled rasp to plane the wooden fang-like feet of the ottoman, which would have been the same technique used to carve the legs of the present coffee table.5

“Everybody’s afraid to bring things out into the open…We live in boxy rooms, back our couches and chairs up against the wall–we’re afraid to stand free. But I design my furniture for modern, open homes. I like it to stand by itself, to look right from all angles.”

The design echoes the vogue for biomorphism stemming from the vocabulary of artists Jean Arp, Joan Miró, Henry Moore, and Barbara Hepworth, as well as Noguchi’s contemporary, Alexander Calder, who were all associated with Surrealism. Perhaps Noguchi derived inspiration for his table’s contours and recessed hole from Miró’s Dutch Interior (I), 1928. This painting was exhibited at the Museum of Modern Art in Joan Miró from January 19, 1941 to January 11, 1942, entered the museum’s collection in 1945, and was included in another exhibition at the museum in 1946.6 Both the head of the lutenist and the body of his lute feature asymmetrically placed curvilinear forms on irregular ellipses. The lutenist sits at a wildly organic table, a precursor to Noguchi’s own designs. For this work, Miró responded to the Dutch seventeenth century artist Hendrick Martensz Lorgh and Noguchi’s table honors the biomorphic abstraction innovated by Miró. Noguchi seems to translate Miró’s distorted yet representational composition into a more abstract and distilled aesthetic.

The table also bears similarities with Noguchi’s contemporary series of interlocking anthropomorphic sculptures. Before constructing the sculptures, Noguchi laid graph paper on top of black craft paper. He then sliced through the graph paper to reveal the silhouettes of forms in the black paper below. Following these designs, Noguchi created paper maquettes before cutting the stone. Some of the components in Worksheet for Sculpture, 1945-46 look like appendages ending in balls—akin to the leg of the table with the lobed foot. Noguchi’s series of unique marble coffee tables share two of the materials used in these sculptures: architectural stone slabs (meant for facades and floors) and wood. For comparison, Figure of 1946, is composed of a lighter gray striated marble, and Remembrance from 1944 is carved of mahogany, the same material as the present coffee table’s legs. Possibly influenced by Salvador Dalí, Remembrance’s dangling parts can be seen as a pendant to the legs of the table.7 At the bottom of this sculpture, a horizontal piece forms a miniature tabletop and the large teardrop form notched to it looks like a Noguchi tabletop turned on its side. We see sculpture in Noguchi’s tables and tables in his sculpture.

Noguchi writes about Remembrance, “Among my experiments at this time, I made many sculptures combining incongruous elements such as bones and found objects of various sorts. I was also entranced by lightness and hanging.”8 This interest in found objects is apparent in Noguchi’s adaption of an everyday bowl for the coffee table, which carries on the legacy of Marcel Duchamp’s ready-mades. Its incorporation into the table demonstrates the artist’s ingenuity and interest in engineering. Yet the marble table has a simplicity and abstraction that is more akin to the sleek elegance of a sculpture by Constantin Brâncuși. The levity and balance of both Noguchi’s sculpture and table take inspiration from this mentor for whom he served as an apprentice in Paris in 1927. In Brâncuși’s studio, Noguchi learned how to cut stone. The white-streaked and variegated marble surface of the present table can be likened to the gray marble Brâncuși chose for his Fish, 1930. While Brâncuși’s polished and striated stone suggests the speed of a fish swimming through water, the patterns on Noguchi’s stone simulate a galaxy or a topographic map. Like a jewel in a three-pronged setting formed by the legs, the marble’s presentation compares to Brâncuși’s elevation of his sculpture on a three-part pedestal. Both artists’ works change with different viewpoints. Noguchi’s table seems to levitate and only have one or two legs, and Brancusi’s sculpture becomes narrow and foreshortened. In an interview in 1949 Noguchi claimed, “Everybody’s afraid to bring things out into the open…We live in boxy rooms, back our couches and chairs up against the wall–we’re afraid to stand free. But I design my furniture for modern, open homes. I like it to stand by itself, to look right from all angles.”9

Noguchi stands out from other furniture designers in only having three legs for his marble tables. He frequently used the tripod format in other design projects, sculptures (like Remembrance), and ceramics. It is even seen in the first lamp he created [(Three-Legged Cylinder Lamp), circa 1944], which he made for his sister and which features one leg ending in a ball. The artist’s fascination with three legs extends to the objects that he collected from other cultures. The Noguchi Museum’s study collection includes several objects with three legs: a Lobi Maker (Burkina Faso/Côte d’Ivoire) Chair, a Lobi maker Portable Stool, and a Chinese Wine Vessel (Jue), late Shang Dynasty, circa 12th century BCE. Noguchi maintained his interest in three points of contact with the floor well into his career. In a 1972 documentary, the artist holds up his Lobi Maker Chair, saying, “The Africans … they’re so intelligent – look what a wonderful chair this is.” Sitting in the chair, he claims, “Because you see it’s not just one point, but your two feet act as your other two points.” He then moves to sit on his Rocking Stool in Wire Form from 1954, continuing to explain that “you sit on a point” and then your two feet provide the other points. “You really do not need more than one point. And to me furniture is one of those things we’ll eventually get rid of. This is about the way I like it.”10 Noguchi humorously muses about the obsolescence of furniture. In reality, he created art that connects to humanity and daily living. His one-of-a-kind hand-crafted marble table is timeless, metaphorical, and universal in its hybrid forms. 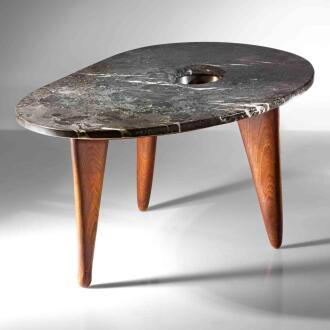