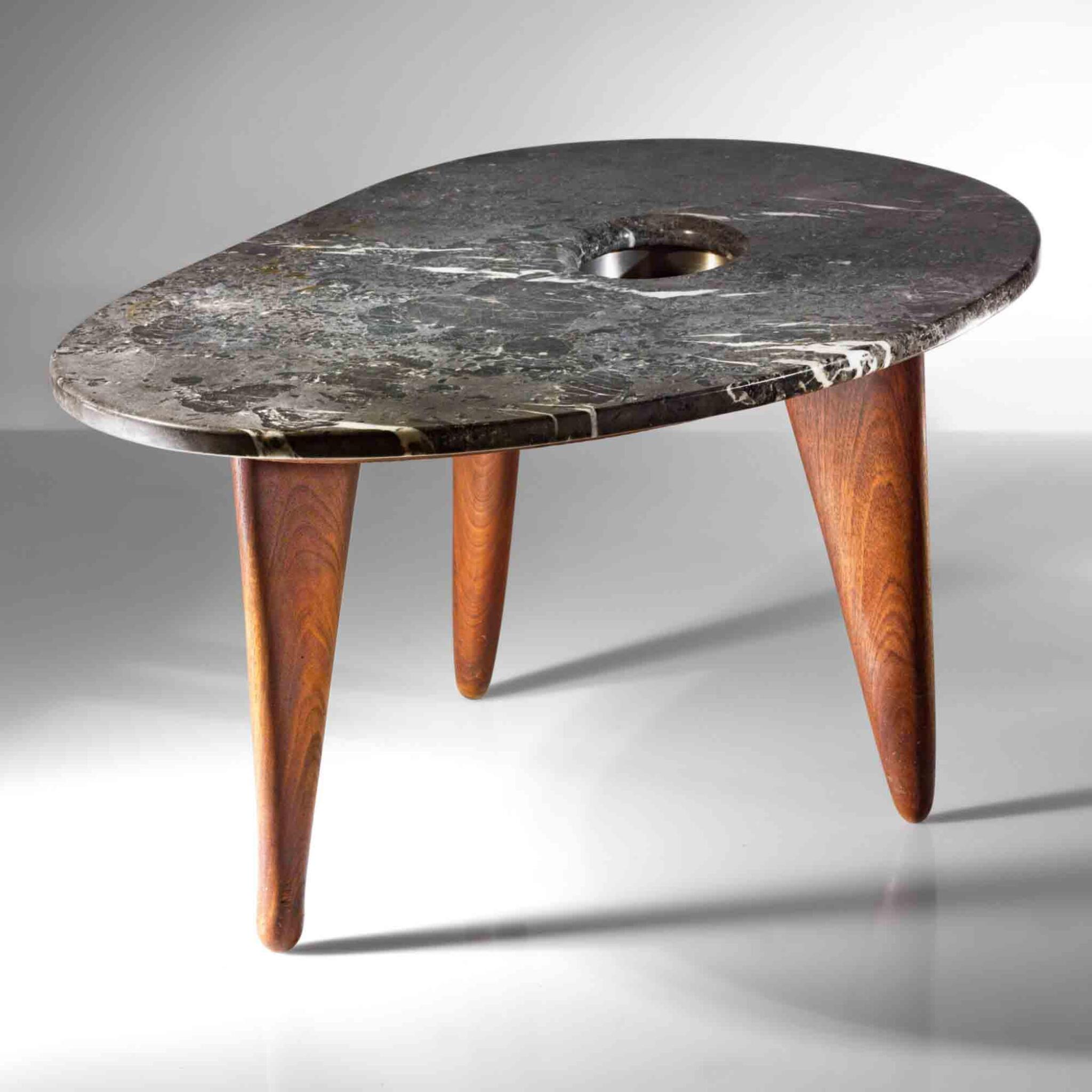 Overall in very good condition. Held in the same family collection since the 1950s, this masterwork by Isamu Noguchi is in very well-preserved original condition throughout. The variegated and free-form marble stone, hand-sculpted mahogany and spun aluminum bowl wonderfully complement each other in a rare and early example of this exceptional design by the celebrated sculptor. The marble surface exhibits superb veining and displays hues ranging from ice white and soft silver to various shades of dark grey that dramatically enhance the free-form composition of the tabletop. The stone presents with two small particulate inclusions to one side of the tabletop likely inherent to the stone and not visible unless closely inspected. The marble presents with light surface scratches consistent with gentle use and scuffing to the surface around the central hole, consistent with the placing of the aluminum bowl. The marble rests atop a plywood surface in very good functional condition, with some extremely minor abrasions to the edges which are not visible when the tabletop is installed. The three hand-carved mahogany legs exhibit a stunning wood grain and, when viewed firsthand, great nuance in coloration with shades of rich russet brown. Each leg displays unique sculptural attributes that speak to Noguchi’s practice as a skilled wood sculptor. When closely inspected, the mahogany surfaces present with occasional and minimal imperfections and pinholes inherent to the wood selection. The mahogany presents with very light surface scratches consistent with gentle use and some occasional faint white paint marks which are scattered and not visually distracting. The tapered leg presents with a small area of shallow abrasions to the foot measuring approximately 1 x 1/4 inch and not visually distracting. The spun aluminum bowl is removable and allows for a variety of uses, from a simple container to a flower pot and incense holder. The aluminum presents with light surface scratches, light soiling and minor oxidation marks consistent with age and gentle use.

An important and newly rediscovered work by Noguchi, the present table embodies the extraordinary fusion of sculpture and design and constitutes one of the most exciting functional pieces by the artist to ever appear at auction.