Surrealists and Their Pets

René Magritte’s portrait of his beloved pet Pomeranian-Spitz, Le Civilisateur, was recently sold in the Œuvres sur Papier sale in Paris on 22 March. In honour of Magritte's homage to his dog, we look back over several artists of the Surrealist movement, and the animals that kept them company at home, in the studio, or on the road. The human relationship with animals has long been a subject for artists through the ages.

Animals have been both muses and companions for artists, from ancient depictions of buffalo and deer in early cave paintings, through to the elegant and meticulous equine pictures of George Stubbs in 18th century high-society England. These pictures reveal the artists in a collision of their domestic and professional lives — with the same interests and friendships as people the world over. Of his pet dog, Lump, Picasso once said: "Lump, he's not a dog, he's not a little man, he's somebody else."

René Magritte in Jerusalem with his dog, 1966.

Magritte’s artistic influence is far-reaching, and made a lasting impression on popular culture — from film and advertising to music. On his 1983 album, Hearts and Bones, Paul Simon named a song"René and Georgette Magritte With Their Dog During the War" as an homage to the artist and his legacy, inspired by a picture taken by the German photographer Lothar Wolleh. René Magritte and his wife Georgette had several dogs over the years, and this playful work demonstrates their devotion to the pet as a cherished member of the family.

RENÉ MAGRITTE IN JERUSALEM WITH HIS DOG, 1966. © SCALA ARCHIVES.

Salvador Dalí takes his Anteater for a walk on the Paris Metro, 1969.

The founding father of Surrealism, André Breton, was given the affectionate nickname "le tamanoir” (the anteater) by his fellow Surrealists, who counted Salvador Dalí, Yves Tanguy and Max Ernst among their number. It is thought that Dalí’s pet was an homage to his close friend and collaborator, Breton, who wrote the Surrealist Manifesto in 1924.

SALVADOR DALĺ TAKES HIS ANTEATER FOR A WALK ON THE PARIS METRO, 1969.

Salvador Dalí’s work drew on symbolism from diverse sources, and images of animals — both figurative and abstract — often featured. It was not just the anteater that captivated Dalí; he kept a number of animals and was also frequently pictured with his pet ocelot, Babou.

SALVADOR DALĺ WITH HIS OCELOT, BABOU. PHOTOGRAPHED BY ROGER HIGGINS.

The bird was a central motif in the work of Max Ernst, and one that he has long been associated with. His fascination with birds was said to have begun with the death of his pet parrot as a child, which made a lasting impression on the young Ernst, and appeared in many guises in drawings, paintings and sculptures thoughout the height of Surrealism and beyond. This picture, by contrast, shows a moment of tender friendship between the artist and his dog, photographed by his wife, the American artist Dorothea Tanning.

Pablo Picasso with his Daschund, Lump, 1957.

Picasso acquired Lump from his friend, the photographer David Douglas Duncan in 1957 who was visiting Picasso in his home in the South of France. Picasso and the dog struck up an immediate close bond on that day, with Picasso even painting a likeness of the dog on a ceramic plate. Duncan gladly gifted the artist the characterful little dog after witnessing the chemistry between them. Lump was photographed many times with his master, and was a regular fixture in Picasso's studio and on his extensive travels.

PABLO PICASSO WITH HIS DASCHUND, LUMP IN 1957. PHOTOGRAPHED BY MARC RIBOUD. © MAGNUM PHOTOS.

Leonora Carrington was one of the leading figures in Surrealism, and remained a prolific painter until her death in 2011. Altough born in Britain in 1917, Carrington spent much of her life in Mexico after emigrating in 1940s. Prior to this, she spent time in Paris where she became friends with artists such as Max Ernst and Paul Éluard before the outbreak of the Second World War. Once in Mexico, Carrington adopted the vibrant way of life and quickly earned a place at the heart of the creative scene. Her home and garden were frequently filled with artists, writers and musicans, and of course, her beloved cats. 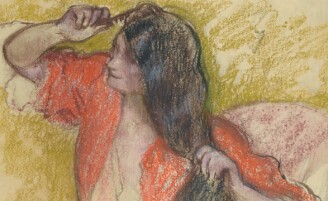