T he summer season has now fully embraced New York City. And as temperatures ascend, the city’s boulevards have never appeared quite so glorious. Flâneurs, tourists and residents alike traverse the streets, encircling an array of the city’s offerings.

For all in the city, a great diversity of lush gardens, flowing waterways and revelatory museum holdings stand within reach. This sentiment once included artist Julian Barrow (1939-2013), who, despite his English upbringing, was particularly fond of New York’s summertime.

An artist known for his English cityscapes, Barrow delighted in illustrating New York’s landmarks as well, which can be exemplified by his artworks depicting the New York Public Library, the Frick Collection, Central Park, the Conservancy Gardens and Bethesda Fountain. A suite of works by the artist featuring beloved New York landmarks are included in the American Art Online sale which is now open for bidding. All works will be on view in our York Avenue galleries until the close of the auction on July 26th at 12PM.

Explore the splendor of Barrow’s New York summer scenes below. 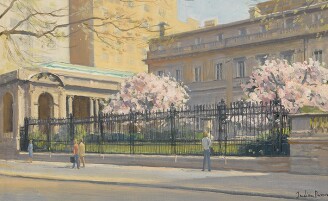