By Halina Loft
Kelly Sidley, Associate Specialist in the Photographs Department at Sotheby's, chooses her favorite works from the upcoming Contemporary Photographs sale, taking place 27 September at 10:00 AM EDT in New York.

"S otheby’s annual Contemporary Photographs sale presents works dating from the 1970s to today. From large-scale landscapes and fashion-inspired photographs to poignant portraits and abstract images, my selections are as distinctive as the photographers who made them."
– Kelly Sidley, Associate Specialist and Senior Researcher, Photographs Department at Sotheby's New York

"I find Minter’s photographs – such as this image of high heels viewed through a curtain of water – to be utterly empowering. It’s no wonder that Madonna used similar works by Minter for the backdrop of her live performances during her Sticky & Sweet Tour in 2009. Minter takes a nuanced view of the sensualized female form and pushes her hyper-sexualized imagery to serve double-duty: photographs such as Streak are at once visually seductive and celebratory while also critiquing the fashion industry and our overloaded consumer culture." – KS

"Welling’s lighthearted and airy ‘Flower’ images belie the rigorous process devised by the photographer to construct his seductive riffs on the classic floral still-life. After positioning blossoms native to California on sheets of 8-by-10 film, he exposed each one to light and then projected the negative onto special photo paper through an enlarger and color filters. The result are these hyper-realistic, joyous botanical studies." – KS

"When Sugimoto first came to New York City in 1974, he visited the American Museum of Natural History, where he was fascinated by the life-size dioramas of different landscapes, wildlife, and geologic periods. ‘The stuffed animals positioned before painted backdrops looked utterly fake, yet by taking a quick peek with one eye closed, all perspective vanished, and suddenly they looked very real. I had found a way to see the world as a camera does. However fake the subject, once photographed, it’s as good as real,’ Sugimoto has explained. From his series ‘Dioramas’ (1975-1999), this scene represents the Cambrian period when earth experienced a radical diversification of living organisms, particularly those living underwater." – KS

"If you crave the ocean but can’t get to the shore, Misrach’s seascape from his epic series ‘On the Beach’ is the next best thing. Its immersive size encourages daydreaming and contemplation. Misrach has said that this series is ‘. . . suffused with a sense of the sublime, but it also begins to expose our vulnerability and fragility as human beings.’ In the center of the work, a single figure floats serenely in the blue expanse." – KS

"In the later 1970s Prince, along with other members of ‘The Pictures Generation,’ began to appropriate imagery from newspapers, magazines, television, and films. While working in the file department of Time Life, he cut out and organized tear sheets from its various publications – a process through which Prince arrived at his specific method of repurposing: after salvaging an advertisement or image from the clippings, he re-photographed it and printed it without text or logos. For his series ‘Couples,’ Prince selected pairs of glamorous men and women, slyly playing with gender roles, hetero vs. homosexual relationships, and the inherently unattainable standards of beauty presented in the media." – KS

"In the lyrics to ‘God’ (1970), John Lennon wrote: ‘I just believe in me, Yoko and me, and that’s reality.’ Leibovitz took this portrait of the couple entwined on the floor of their bedroom just hours before Lennon was shot and killed outside their New York City apartment. Rolling Stone magazine had originally commissioned the photo shoot in advance of the release of their joint album Double Fantasy, but this iconic image was ultimately featured on the cover of the memorial issue dedicated to Lennon. Steeped in intimacy, vulnerability, and gentleness, this photograph is one of the great representations of modern love." – KS

"In 1988, the Polaroid Corporation brought its massive 20-by-24-inch camera to Rauschenberg’s studio in Florida. The artist was fascinated by Polaroid’s photographic process and devised ways to manipulate and interfere with the developing chemicals so that each unique print had a weathered, bleached-out appearance. " – KS

"The saturated colors and enticingly glossy frames of Lassry’s still-life photographs deliver a visual punch. The artist considers each of his photographic objects to be ‘something that’s suspended between a sculpture and an image.’ These four photographs are from Lassry’s breakthrough moment in the late 2000s and early 2010s when he began to place lacquered frames in conversation with photographic images that he either appropriated from vintage magazines and film archives or took himself, imbuing his own pictures with a commercial, advertisement-like aesthetic. Lassry deliberately printed most of these works on 11-by-14-inch paper in order to work within the framework of readily available photographic materials. A print of Angela Ledgerwood, another work by Lassry on offer this season, was included in MoMA’s exhibition New Photography 2010." – KS

"Tillmans’s large-scale, swallow-me-whole color field photographs are contemporary offshoots of 1950s Abstract Expressionist paintings. But don’t be fooled: These works are not mid-century throwbacks. Tillmans began the ‘Silver’ series in the late 1990s by feeding photo paper through a processing machine that contained leftover traces of chemicals, particularly silver nitrate. As the paper moves through the machine, it is etched with streaks, scratches, and other errant deposits. Embracing the inherent properties of photographic materials as well as the possibility of chance, works such as Silver 143 allow orchestration and improvisation to share the same stage. " – KS

"David Yarrow has redefined the art of contemporary animal photography. Of this image, he has said, ‘Unlike many of my lion shots, this was not taken with remote controls, it was camera in hand. I was in a two-man cage, with my assistant behind me controlling the door with a rope. . . In my view, the best time to photograph lions is about half an hour after sunrise. The light gets stronger by the minute . . . The face of the lion could not be sharper—every detail is there and he is looking right into my eyes – as he is transfixed.’ The formal simplicity, logistical complexity, and inherent beauty of this photograph pays tribute to this magisterial creature." – KS 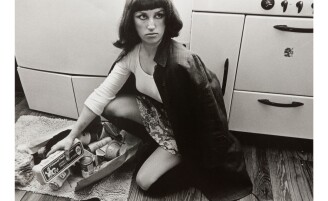