By Sotheby's
This summer, Sotheby’s will host Brave New Visions: The Émigrés who transformed the British Art World , an exhibition telling the story of the pioneering émigré dealers and publishers who revolutionised Britain’s art world. Part of Insiders / Outsiders, a nationwide, year-long festival celebrating refugees from Nazi Europe and their indelible contribution to British culture, the exhibition – open from 17 July to 9 August – illustrates the histories and vision of these art world luminaries and highlights their profound influence and impact.

I n bleak post-war London, a group of émigrés who had found sanctuary in Britain in the 1930s re-made their lives and introduced avant-garde European and British artists such as Naum Gabo, Oskar Kokoschka, Kurt Schwitters, Graham Sutherland and Ben Nicholson to the broader public.

Featuring over 40 paintings and sculptures, the exhibition reveals the story of a displaced community that thrived in an unfamiliar environment and brings to light the little-explored narrative that binds the founders of what are now some of the best known establishments on the London art scene, including Marlborough Fine Art, Crane Kalman Gallery, Annely Juda Fine Art and Gimpel Fils.

Sir Nicholas Serota, a patron of the Insiders/Outsiders festival, comments: ‘The arrival of two generations of refugees from Nazi Europe, amongst them artists, art historians, publishers and dealers, transformed British society and the British art world. They brought direct experience of a more cosmopolitan world in which the arts played a central role in everyday life and first-hand engagement with some of the most exciting developments of the European avant-garde. Their presence totally changed the intellectual climate in Britain and paved the way for a much more dynamic art world in the post-war period.’

The exhibition illustrates the twin revolutions in art dealing and art publishing that evolved from a small but resilient émigré community. Combining a scholarly enthusiasm for European ‘high’ culture with considerable commercial acumen and determination, the outlook of the émigré dealers and collectors was emphatically international and transnational. By championing artists who explored new ways of depicting the world, and others who rejected representational art altogether, they spotlighted both émigré artists such as Josef Herman and Jankel Adler and a new generation of British-born artists such as Gillian Ayres, Lynn Chadwick and William Turnbull.

These dealers included determined pioneers Lea Bondi-Jaray, Erica Brausen and Annely Juda, who fearlessly forged their way in a male-dominated art world. Charles and Peter Gimpel, former French Resistance heroes, founded a gallery in honour of their father, who was murdered in a Nazi concentration camp. The exhibition reflects the courage and often tragic personal histories of these dealers, together with those of other influential dealers such as Andras Kalman, Jack Bilbo, Frank Lloyd, Harry Fischer, Henry Roland and Gustav Delbanco.

Fellow émigrés Béla Horovitz and Ludwig Goldscheider at Phaidon, and Walter Neurath and Eva Feuchtwang at Thames & Hudson, led a parallel revolution in the staid world of British publishing. They provided an international platform for European scholarship in affordable and seminal art books such as Ernst Gombrich’s best-selling The Story of Art and the World of Art Library while raising standards of design and reproduction.

Brave New Visions is curated by Sue Grayson Ford MBE, founder of the Serpentine Gallery, assisted by Cherith Summers. Sue comments: ‘Eighty years after the outbreak of World War Two, this is a timely reminder of what refugees have brought, and continue to bring, to their adopted homeland. It reveals how the vision of the émigré dealers and publishers helped to make London one of the most important centres for modern and contemporary art.

Simon Hucker, Senior Specialist, Sotheby’s Modern & Post-War British Art, says: ‘We are absolutely delighted to be able to lend our support to Brave New Visions: we see the names of these legendary dealers on the backs of important works all the time, so we’ve always been aware of their major contribution to the British art scene in the post-war years - especially though their support of young, emerging artists who were looking for new means of expression to reflect very changed times. In the current political climate, it feels all the more pressing that we look back and remember that the art we now take for granted only had the opportunity to survive and flourish through the vision and hard work of a small band of people who had come to our shores as refugees.’

Sotheby’s will host four events to coincide with the exhibition. On 18 July, the daughters of the founders of Phaidon Press and Thames & Hudson will be in conversation with writer Anna Nyburg, who has researched the histories of both publishing houses. A panel discussion The Realities of Restitution on 19 July will explore the complexities involved in the restitution of looted artworks while on 23 July, Navigating the Art World will be an opportunity for artists, collectors and others interested in the art market to hear more about the opportunities and challenges presented by the international business of art – both discussions are sponsored by Mishcon de Reya LLP. On 24 July, Richard ‘Dick’ Ellis will give an account of his highest profile cases as one of the world’s leading art detectives. 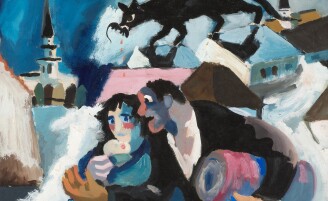