S hirin Neshat is among the handful of artists who have broken the mold and do not belong to one culture or nationality. Born and raised in Iran but trained in the USA, Shirin is known worldwide for her expressive and highly charged portraits that speak of the human condition, not just issues confined to her own experience.

"These portraits are personal but not autobiographical," as she articulated in her talk with Art Newspaper's Louisa Buck at the Goodman Gallery last week. Land of Dreams, a major show of the artist's work after a 20-year absence from the UK scene, is an eloquent representation of Shirin's current body of work that offers an arresting series of images. The exhibition's opening coincides with the artist's appointment as master of photography at this year's Photo London.

Essential to Shirin's practice is her unique voice and point of view. Having left Iran as a young adult after the Islamic Revolution, her exile in America since the 1990s has been at the root of her perspective in delving into dominant binary narratives such as Islam versus feminism. In all her works, she challenges the viewer to look at the inside and out, the personal and public, the the real and the assumed.

In the current show, over 60 works alongside two major video installations provide a comprehensive look into her practice and her gaze towards the 'Western world,' her collective portrait of America under the Trump administration. Individual lives in this context are represented in iconic portraits, each against a background of her painstaking signature calligraphic inscriptions. The Land of Dreams project was shot in New Mexico in 2019, and the portraits represent the photographs that the fictional protagonist Simin would have taken during her interviews. They capture the diversity of American identities, including Native Americans and Hispanics of varying ages and genders.

As an award-winning filmmaker and artist, Shirin first received international recognition by winning the First International Prize at the 48th Venice Biennale in 1999. Since then she has been the recipient of several other prestigious awards including the Silver Lion at the Venice Film Festival (2009), the Crystal Award, WEF Davos (2014), and the Praemium Imperiale Award in Tokyo (2017). 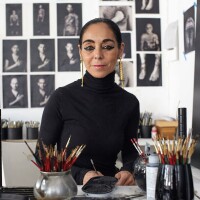 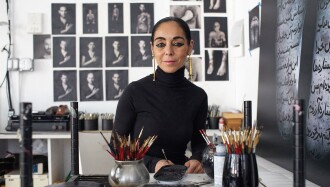 Shirin's return to the London scene is a most welcome reminder of an artist whose exploration of topical themes, particularly in films couched in magic realism, remind us that life at every step begs close examination and mindful understanding, lest the dreamer unwittingly enters a nightmare and is caught in the web of that particular scenario. How apt for the challenging times we are facing.