By Colleen Leth
The Vision Series explores great ideas in museum leadership, through candid conversations with founders, directors, and curators from around the world. Each month, Sotheby's Museum Network profiles a visionary who is rethinking the role of museums in the 21st century and going beyond the walls of the institution to connect with audiences in groundbreaking ways.

"T he right function of every museum,” wrote the Victorian art critic John Ruskin in 1880, “is the manifestation of what is lovely in the life of nature, and heroic in the life of men.” The museum as a lofty custodian of knowledge and beauty held sway for a century, but today the role of cultural institutions is more complicated.

Enter Axel Rüger. The smartly dressed 50-year-old has been the director of the Van Gogh Museum in Amsterdam since 2006. The institution was founded in 1973 with a collection donated by Vincent Willem Van Gogh, the artist’s nephew. Today it holds 200 paintings, the world’s largest collection of the artist’s work. Last year the museum welcomed a record 2.25 million visitors, most of them from abroad. Remarkably for its size, it is the most-visited museum in the Netherlands – and straining at the seams. Now Rüger is finding new ways to bring Van Gogh to a wider public.

Born in Dortmund, Germany, Rüger had a traditional, albeit impressively accelerated, curatorial background and academic training. He studied art history at the Freie Universität in Berlin, Cambridge University and Queen’s University, Ontario. He worked in museums across the United States before getting what he terms a “lucky break” as the curator of Dutch paintings at the National Gallery in London. And yet, since arriving in the Netherlands, Rüger has been breaking all the rules.

“I wanted more of a say of the direction of the institution; more responsibility, really,” says Rüger. Among his bravest steps has been the creation of exhibitions without original works of art. In 2015, to mark the 125th anniversary of van Gogh’s death, Rüger joined forces with the artist’s grand-nephew, also called Vincent Willem van Gogh, to host the Relievo exhibition. It featured ultra high-quality 3D reproductions of nine famous works including Sunflowers, 1889, complete with frames. The show toured cities including Hong Kong, Los Angeles and Dubai, while 260 editions of the works sold for around €25,000 each. 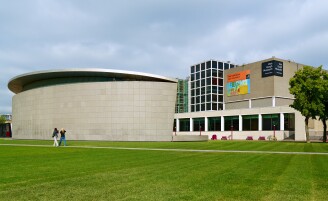 A year later, another non-traditional travelling show, Meet Vincent van Gogh, was unveiled in Beijing. The immersive “experience” features reproductions, videos and interactive stage sets, bringing visitors into the tortured world of the artist. Rüger describes the show as “a work in progress” and “an endeavour to present Van Gogh – his thoughts, who he was – without cannibalising the collection”.

This year, Rüger tested the concept on home soil. Van Gogh Dreams opened in July in the main museum on Amsterdam’s Museumplein. The installation combines video, light and audio to create a sensory journey through five crucial periods in the artist’s life.

It is tempting to view these ventures with skepticism, until you consider the hunger at home and abroad for loans of Van Gogh’s work. “Van Gogh is perhaps the most famous artist on the planet. I can’t satisfy the demand for his works,” says Rüger. “Van Gogh Dreams makes use of an exhibition space in a different way; it’s an experiment, and we are learning and studying how users respond.”

Despite the museum’s popularity, money is still an issue. Unusually for a Dutch institution, the Van Gogh Museum is only 13% government funded. It earns a further 37% of its budget from fundraising and commercial endeavours. The remaining half comes entirely from ticket sales. Rüger expanded the museum in 2015, introducing a larger entrance hall, analysing visitor flows and implementing timed tickets, but it is once again at capacity. The virtual shows allow the museum to earn money from abroad without lending its limited collection. “Government funding is... under pressure,” Rüger said in 2015. “It’s critical for us to diversify our income streams further and seek new business opportunities.”

In August, the Van Gogh Museum partnered with skateboarding fashion brand Vans to create clothing and footwear adorned with Van Gogh’s artwork. These projects need to earn money, but Rüger argues they serve other purposes. “Art has always been a commodity… and the boundaries are shifting,” he says. “But we feel that you can reach a new, important audience too. I received a message on Instagram from a young person recently saying: ‘I really didn’t know who this guy was, so I spent half an hour reading up on Van Gogh.’ If a pair of sneakers can achieve this… that’s amazing.”

This commitment to providing access to wider audiences is crucial to Rüger’s vision. In 2011 he made the Van Gogh Museum one of the first contributors to the Google Art Project, a free database of high-quality images of famous – and not-so-famous – artworks, instead of charging fees. As this project has grown so has the Van Gogh Museum’s involvement. For Rüger the partnership is a means of giving as wide an audience as possible a chance to experience the artist’s work. “There’s this myth – and emotional response – about Van Gogh that sets us apart from our colleagues in a sense. We feel a responsibility to connect to the world, to share him with as many people as possible."

Asked what makes an effective museum director, Rüger says we need to broaden our understanding of the role. “We often think of [the job] as the ‘next step up’ for the curator, but nowadays you run a rather complex organism, almost like a company – you have to have just as much interest in finance, security, stakeholder management and policy-driven issues,” he says. But he says at heart he is neither a businessman nor a radical. “Maybe I’m a conservative has-been – but despite all the technology our core activity is still to conserve, present, and study the collection,” he says. “The museum is of course also a space of communing where audiences are offered access to art in different ways, but there is something about the aura of the original, and it remains our main objective.” Maybe John Ruskin would approve after all.