When did you first become aware of Arthur Rackham and what was about his work that appealed to you?

Well, I have been collecting fairy-tale books all of my life, and I’d been exposed to some of Rackham’s images, in uncredited plates often in Latin American or Spanish publications. Then as a kid, I started recognising Rackham’s trees in Walt Disney films drawn by Gustaf Tenggren, who was very much influenced by him. I believe Disney himself was exposed to Rackham’s illustrations when he was travelling through Europe with his wife. And Rackham was certainly a big influence on the aesthetic of Disney’s trees, how they were anthropomorphic – the corrugated knuckles of wood knots, and so forth. Certainly in my movies, I have made it a point to acknowledge his influence on the design of the Faun in Pan’s Labyrinth, which is basically a living, breathing Rackham tree, in the shape of a Faun.

Was that always the intention with the Faun? To have a Rackham-inspired aesthetic?

I tried to convey that to the designers, I even sent them examples, because I wanted the Faun to look like either a pile of moss, or a Rackham tree. We explored different directions with it, but that was the idea. If you were going through the ungrateful task of digging through my old interviews, you would see that I reference Rackham as early as Mimic in 1997. I’ve been collecting him for a long time. I believe I own ten Rackham originals, which for me is a lot and not enough.

Which Rackham drawings do you own?

I bought Gulliver Fighting The Wasps which is one of my favourite drawings. And then I was fortunate enough, I don’t know how I did it, but I got a couple of the Ring [series]. I think people who buy Rackhams can afford to keep them for a lifetime. You don’t see them in the market, coming and going. They are bought out of love. People have a huge kinship with them.

What do you think of this sale?

There’s a couple that are gorgeous, but my problem right now is wall space, I don’t want to buy anything I don’t display, and I don’t know where to put anything else. I’ll find a way, but I have to be very judicious. I don’t want to be hoarder.

What is your approach to collecting?

My approach is this - when an image intrigues me enough to own it, I want to see it up close. I want to be inspired by the relationship between the image and me. Every day, I go to my office and I salute certain images. I look at them and I know they’re talking to me. I believe in the totemic power of objects, not in a supernatural way but I do believe that when you own something, it’s a very powerful act of kinship. You say, ‘Come and live with me in my house, little Rackham drawing! Come and say hi to me every day, and I’ll say hi to you'.

'I do think that a collector needs to live with their art. They need to be in contact with the art. When I look at the drawings or the paintings, I think of the artist’s life. I think of the time they lived in.'

So, you choose to live closely with your collection?

I live with it every day. Yesterday I went out to pick up a coffee and I said hello to a couple of the sculptures. It’s silly, but I do think that a collector needs to live with their art. They need to be in contact with the art. When I look at the drawings or the paintings, I think of the artist’s life. I think of the time they lived in. This is how I am with the art I own. I frame it often with the back open so I can read the handwritten notes to the printer or the delivery seal. Because I imagine Rackham wrapping the illustration just in time to make it to the printer.

It feels like you are a student of the fantastical. Rackham was working in Edwardian times. Why do you think that was such a fruitful time for the fantastical and the gothic?

Repression! I think that’s the short and the long answer.

A favourite subject you and Rackham share is monsters. How do you define a monster?

I think that it is a creature that exists beyond nature. It is super-nature. It embodies a principle that is also larger than nature. That’s why monsters can represent the earth, or the wind or fire or greed or envy or anger. They are very much necessary figures in the cosmology of our storytelling about ourselves. They are necessary for us to understand the cosmos. We cannot make sense of something larger than us. I think that as storytelling animals, we need them.

Why do you think Rackham’s work has such longevity?

Because I think they came really from within him. You can sense the creatures are real for him. For a creation to be true, it has to come from within his or her core. The artist’s core must be at play. He loved to do his self portraits and he always drew himself a little gangly and a little awkward. And you can sense that he liked his monsters.

Why is sketching the medium for you to start things off with designing your movies and how do you bring them to life?

I write longhand in my diaries, but I type my screenplays. I’m not a trained artist, I’m self-taught and I’m really not even passable but I can break certain codes by drawing them and it doesn’t mean that that’s the [final] incarnation of the thing. It just helps me find out the component that I understand, in order to be communicated to the crew and team of designers. But more and more, I draw less. The older I get, the clearer I have it that I can extract the ideas and go through others faster. I don’t have to torture myself by drawing. Because I draw what I can, not what I should. If I was a trained artist, I could draw what I should.

Do your pages look how they do in your mind?

No! They look a lot worse. The movies look like what I imagine, and better. One of the things I really consider very seriously is that I would love to go back and do a pause in my life and become a painter for a few years, and go back to school, go back to university and take two, three years of fine arts and paint for a while.

Maybe it’s not too late?

No it’s not too late! My cardiologist says that.

If you could have a conversation with Rackham, what would you want to ask him?

I think I do speak to him, so I don’t have to imagine! I have read what I can of him, the biographies that exist. One of the rooms in my house is called the Victorian/Edwardian room and I dedicate it to the study of Victorian and Edwardian life, social mores, cooking, housekeeping, everything... I used to call it the Dickens room but Wilkie Collins got a little bothered and said ‘Hey, he didn’t do it alone all the time!’ You have to keep them all happy. Oscar Wilde is also grateful that he hasn’t been forgotten. I say my house is my brain. It’s as simple as that.

So if somebody walks into your house, that’s a doorway to your mind?

Yes, that’s me. If I could put the houses and apartment in a single place - I’m very inspired by William Beckford. He created basically his own abbey where he kept all his treasures and if I had a time machine, that’s the one place I would visit.

Rackham is best known for fairy tales. Do you have a favourite fairy tale?

I think it’s really hard to choose. I love the more Jungian stuff. The stuff that hints at things that are deeper. I love stories where people lose their shadow and they either take it back or lose it forever. In many fairy tales, a deal with a dark genie or the equivalent of an evil persona takes place. They say ‘I’m going to take something so small that you will not miss it’ - and then they take the ability to see the colour green, or the ability to laugh. The things that you think ‘OK, I’ll change all that for riches and it’ll be worth it’. But then, because you don’t have that one little thing – your shadow, say – everything loses all meaning. I think that people forget that these stories were not told to children. They were told to adults originally, not to just entertain kids. They were designed to entertain the household and they carry great regrets, great losses, they talk about famine and plague and famishing families abandoning kids - or coming close to murdering them.

Your next film has no fantastical elements. Will it still be a recognisably GDT film?

Well I made it! This is exactly the same reason as Rackham. If it comes from deep within you, it is yours. You cannot approach these things from the outside. This is what is fascinating for me with the [Rackham] gift book - it was basically an event. When a new gift book came out, it was a luxury item, it was a precious item, something to be cherished, something that became generational. You handed it to your kids. For me, this is the absolute worshipping of the book.

Books are clearly important to you...

I consider books sacred objects. When you see a book I've read, there’s barely any trace that I’ve read it. I don’t break the spine. If one of my books has a mark on the spine, it means I bought it used. I have developed through the years, the perfect method to not crack the spine, not mistreat the pages. Sometimes when my kids visit, they put a cold drink on top of a book or if we’re eating fried chicken near the books, I experience enormous shivers, but I've learned to relax. It’s fine. The grease stain will be part of its history! But I love thinking of these guys being on a deadline, Dulac and Rackham – they had to deliver at a certain point and that has a lot of kinship with film making. You have a running train behind you and you’re trying to make art. I realise that those books were the blockbusters of their time.

Our Books department would be very pleased to hear how well you look after your things!

I think that every object we own, owns us, in a way. And it’s a talismanic deal we do. Look, we don’t own anything and your business makes this more real than anything else. We are just momentary custodians of something that will outlive us. I know that after I croak, my stuff will be scattered to the wind. Some of it will go to real collectors, some of it will go to not great collectors, but the Rackham I own, somebody owned it before. Many, many times. So there is something very pleasant and personal between you and that object to say, 'Look, we’re gonna live together for a couple of decades. What can I do for you?’ 'Well you can frame me nicely, you can look at me now and again. You can acknowledge I exist!'
What is very sad is to keep objects filed or in a collection that you don’t live with. That’s sad. I want to live with them. Imagine, just keeping these things in a warehouse – that's the ultimate horror! 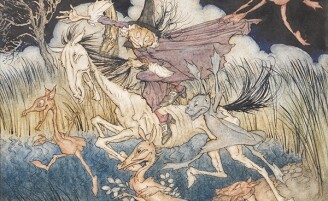